Forecast and trading signals for GBP/USD for September 24. Detailed analysis of the movement of the pair and trade deals. 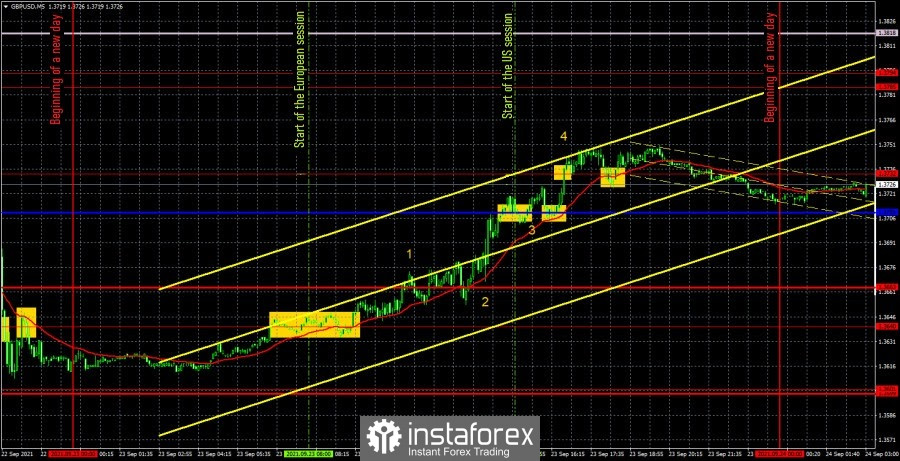 The GBP/USD pair finally moved the way it should on September 23. During the day, the price passed more than 130 points and this is a normal value for the pound/dollar pair. In addition, several very good trading signals were generated at once, and the price was moving in one direction almost all day. Moreover, the trading signals did not coincide with the most important fundamental events of the day, which allowed traders to show flexibility and not leave open trades. But first things first. The first buy signal was formed at the beginning of the European trading session - the quotes overcame the extremum level of 1.3640. Therefore, traders should have taken long positions. A little later, data on business activity in the UK (figure "1" in the chart) were published, which turned out to be much worse than forecasted and provoked a slight drop in the pound's quotes. But this did not affect the general movement in any way. Quotes continued to rise, and by the US trading session, the pair reached and crossed the critical line. About an hour earlier, the Bank of England announced the results of its meeting (figure "2" in the chart), which we discussed in detail in the fundamental review for GBP/USD, after which the upward movement only intensified. Therefore, traders did not need to leave long positions. It was only necessary to set Stop Loss to breakeven. US reports (numbers "3" and "4" in the chart) had no effect at all on the pair's movements, so the quotes safely reached the extremum level of 1.3732 and overcame it. A long position could have already been closed above this level (in the late afternoon). The profit on it was 88 points. The pound paid tribute to traders for all the previous bad days. Not a single sell signal was generated during the day.

Overview of the EUR/USD pair. September 24. "Walk-through" meeting of the FRS. Minimal reaction of traders.

Overview of the GBP/USD pair. September 24. Pound gained support amid the growing hawkish sentiment of the Bank of England. 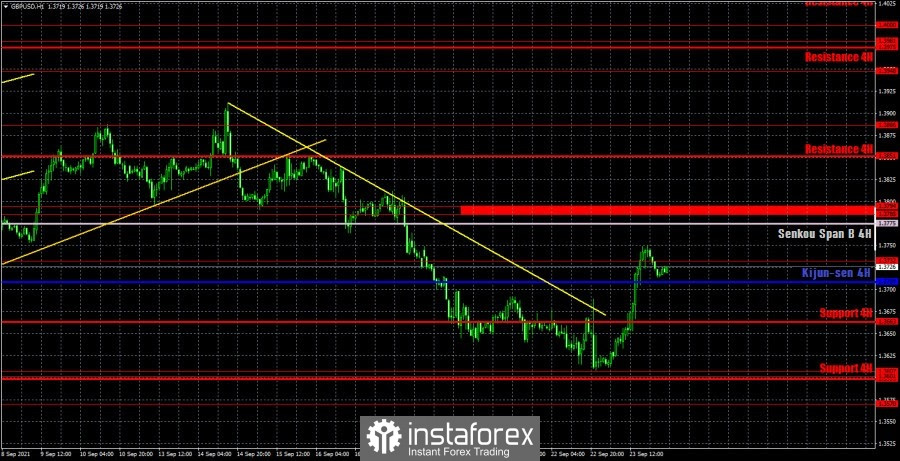 The GBP/USD pair began a strong upward movement on the hourly timeframe. However, we note that the BoE meeting was not the only reason for it. The British currency began to rise in price at night and did not stop there all the past day. Thus, the downward trend is canceled (since the downtrend line has been overcome), therefore, the pound/dollar pair may now begin to form a new upward trend, which we have been waiting for. It should also be noted that the upward reversal took place near the important level of 1.3600, which we have repeatedly called the target for the downward correction on the 24-hour timeframe. We also continue to draw the attention of traders to the most important levels: 1.3519, 1.3570, 1.3601 - 1.3607, 1.3732, 1.3785 - 1.3794. Senkou Span B (1.3775) and Kijun-sen (1.3709) lines can also be sources of signals. It is recommended to set the Stop Loss level at breakeven when the price passes in the right direction by 20 points. The Ichimoku indicator lines can move during the day, which should be taken into account when looking for trading signals. On Friday, 24 September, Sylvanas Tenreiro, a member of the Bank of England, will speak in the UK and he might mention something important. And in America, a speech by Federal Reserve Chairman Jerome Powell will take place, who can also provide important information. Thus, traders may react to both of these events. And both of these events will take place in the afternoon. After such a strong growth, the pound may slightly roll back, but in general we continue to expect further growth from the pair.

Interesting? Write a comment below.
 Forecast and trading signals for GBP/USD for September 24. Detailed analysis of the movement of the pair and trade deals.
Forward 
Backward 