The euro recovered its position faster than our expectations. Yesterday's daily candlestick blocked the black one, formed on the day the Federal Reserve announced its economic forecasts. Markit's PMI business sentiment indexes were published for the euro area and the US for September, and they were better in the euro area. Thus, the composite PMI of the euro area fell from 59.0 to 56.1, while the same index from the US fell from 55.4 to 54.5. At the same time, the number of applications for unemployment benefits in the United States increased from 335,000 to 351,000, while the expectation of 320,000. on the mood of the FOMC members. At the same time, peripheral countries are already raising rates with might and main: Brazil raised from 5.25% to 6.25% while announcing to raise the rate by another 1.00% at the next meeting, Norway raised the rate from 0.00% to 0.25%. Only Turkey yesterday lowered the rate, but from a huge 19.0% to 18.0%, which led to a fall of the lira by 1.1%. The United States clearly has no intention this time, when it will need to increase the current national debt from the current 28.401 trillion dollars by another 4.0 trillion, increase the cost of its maintenance and be an initiator in raising rates. This Fed's intention became more noticeable after yesterday's Bank of England meeting, where two members of the Monetary Committee have already voted for the start of the QE reduction. 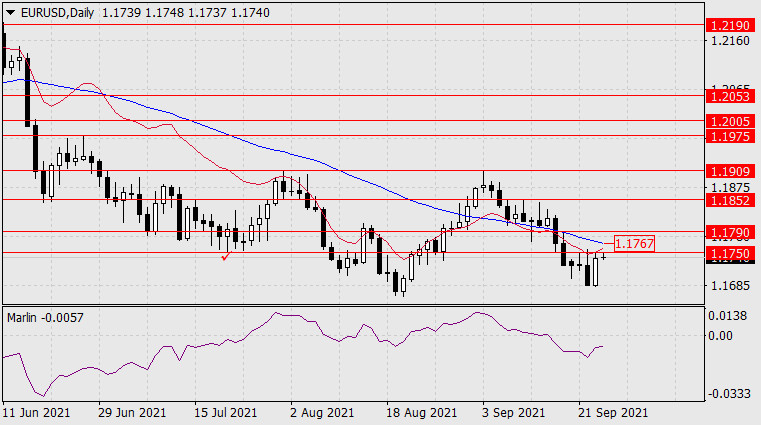 The euro approached the strong resistance at 1.1750/67 on the daily chart, the upper border of which was formed by the MACD indicator line. Exit above this resistance range opens up a growing medium-term outlook for the price. This growth is assumed in the 1.1975-1.2005 range, in which there were market reversals on May 5 and February 5 of the current year, September 1, 2020. 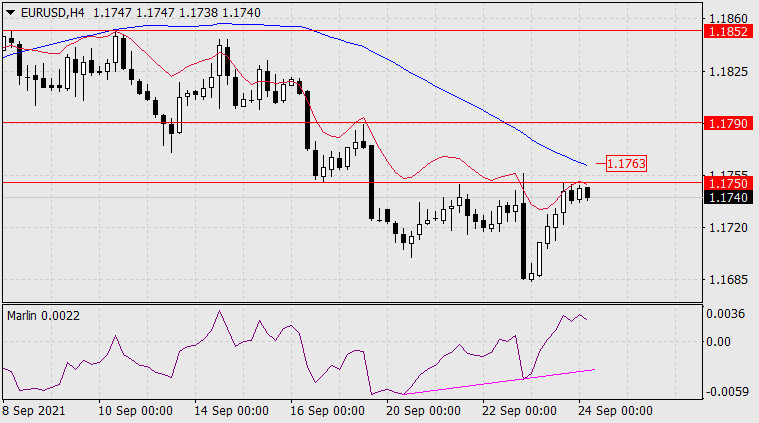 The price convergence with the Marlin oscillator has been fully realized on the four-hour chart. The MACD line at 1.1763 almost coincides in level with the MACD line of the daily 1.1767 scale. The resistance turns out to be strong, but overcoming it will lead to the euro's growth. Overcoming the resistance will probably take place next week.