GBP/USD: plan for the European session on September 1. COT reports. Pound bulls did not fulfill the assigned tasks. Bears

Several interesting short entry points for the British pound were formed yesterday. Let's take a look at the 5 minute chart and understand the trades. In the first half of the day, after an unsuccessful consolidation above the resistance of 1.3792, the first signal was formed to open short positions in the pound in hopes that the pair would fall in the short term. As a result, the downward movement was about 30 points, but we did not reach the level of 1.3752. A similar story happened in the second half of the day, when after a false breakout in the 1.3792 area, the pair collapsed to the support area of 1.3752, and then the trade completely moved under this level, canceling all the bulls' hopes for continued growth.

This morning we will receive the PMI report for the manufacturing sector in the UK in August, where we expect it to remain unchanged compared to the preliminary estimate, so the pressure on the pound may remain in the morning. In order to continue the upward trend, which is one step away from the end and the market's movement into a wide horizontal channel, the bulls need to settle above resistance at 1.3756 in the first half of the day, which they missed yesterday during the US session. Only a test of this level from top to bottom can create a good entry point into long positions with the goal of entering 1.3792, and with the prospect of updating 1.3827, where I recommend taking profits. The 1.3868 level is still a target, from which about 70 points will remain to the monthly highs. In case GBP/USD falls in the first half of the day, the optimal scenario will be long positions from the level of 1.3717, but only if a false breakout is formed there. If the pressure on the pound persists, and the bulls show nothing in the support area of 1.3717, the optimal scenario will be long positions from the 1.3682 low, but only after forming a false breakout. This area will act as the lower border of the new horizontal channel. It is possible to buy GBP/USD immediately on a rebound in the area of the 1.3645 low, counting on an upward correction of 15-20 points within the day. 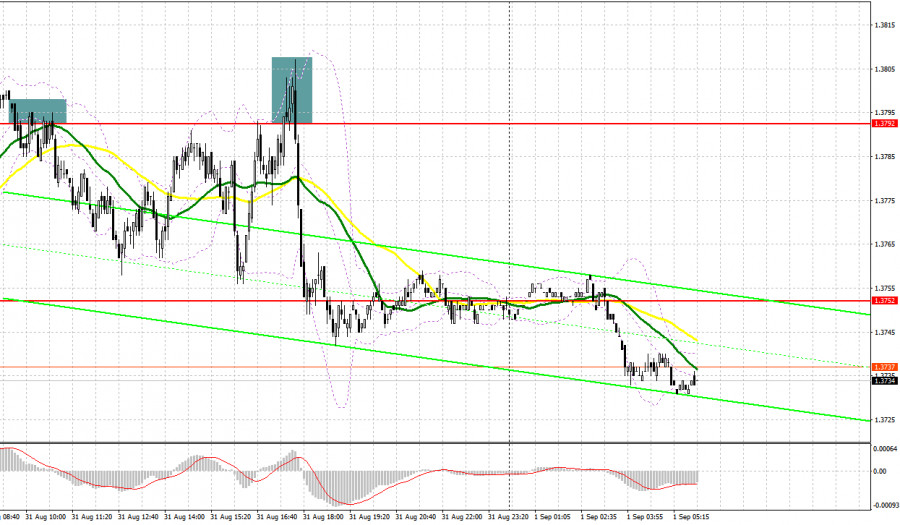 The bears' goal is to protect resistance at 1.3756, above which the moving averages, playing on their side, pass. The optimal scenario for opening short positions will be a false breakout at this level, which will weaken the pound's position even more and push the pair towards the middle of the horizontal channel at 1.3717, which was clearly visible at the end of last week. A breakthrough and test of this area from the bottom up will create another entry point into short positions, which will push GBP/USD even lower - to 1.3682, and there it is near the 1.3645 low, where I recommend taking profits. If the bears are not active around 1.3756 in the first half of the day, I advise you to postpone selling until yesterday's large resistance at 1.3792. I also recommend opening short positions from there only if a false breakout is formed. Selling GBP/USD immediately on a rebound is possible from a new weekly high in the 1.3827 area, counting on a downward correction of 25-30 points within the day. 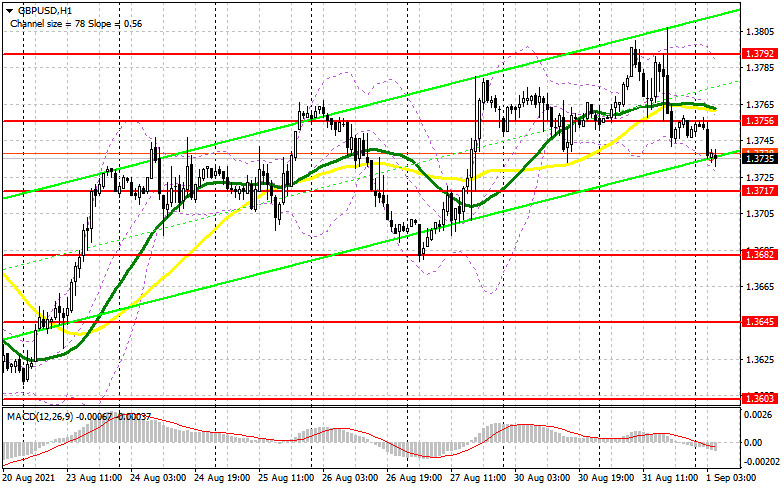 Trading is carried out below 30 and 50 moving averages, which indicates a likely decline in the pound in the short term.