GBP/USD: plan for the European session on September 2. COT reports. Pound stuck in a horizontal channel, but bulls are persistent

A good signal to sell the British pound was formed, but it never came to fruition. Let's take a look at the 5 minute chart and talk about what happened. You can clearly see how the bears are forming a false breakout at 1.3756, which creates a signal to sell the pound, but I did not wait for a major downward movement. Closer to the US session, after the release of weak data on the US labor market, the bulls managed to knock down stop orders and the pound returned to weekly highs. However, there they received a very strong rebuff from the bears. After surpassing 1.3669, the reverse test of this area from top to bottom for forming a buy signal did not take place, therefore, there was no entry point.

There are no important fundamental statistics on the UK today, so trading will continue to remain in the wide horizontal channel at 1.3731-1.3791, going beyond which will determine the pair's succeeding direction. The bulls need to settle above resistance at 1.3791, which was formed at the end of yesterday. Only a test of this level from top to bottom can create a good entry point into long positions with the goal of entering a new weekly high at 1.3826 and then at 1.3868, where I recommend taking profits. The next target is 1.3904, which is the monthly high. In case GBP/USD falls in the first half of the day, the optimal scenario will be long positions from the level of 1.3758, but only if a false breakout is formed there. There are also moving averages, playing on the side of the bulls, which can help the pound with continuing the upward correction. If the pressure on GBP/USD returns in the first half of the day, and the bulls are not active in the support area of 1.3758, the optimal scenario will be long positions from the lower border of the 1.3731 channel. You can also buy the pound there but only after forming a false breakout. It is possible to open long positions in GBP/USD immediately on a rebound in the area of 1.3694, or even lower - from 1.3645, counting on an upward correction of 15-20 points within the day. 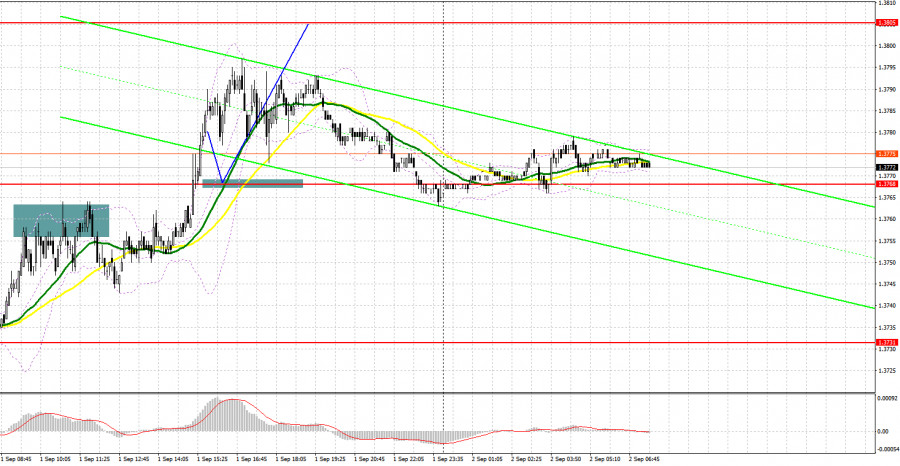 The initial task of the bears is to protect resistance at 1.3791, which coincides with the upper border of the horizontal channel. Considering that there are no important fundamental reports in the first half of the day, the optimal scenario for opening short positions is to form a false breakout at this level, which will weaken the pound's position and push the pair towards the middle of the horizontal channel at 1.3758, where the moving averages are running on the side of the bulls. A breakthrough and test of this area from the bottom up will create another entry point into short positions, which will push GBP/USD even lower - to 1.3731, and there it is near the new low at 1.3694, where I recommend taking profits. If the bears are not active around 1.3791 in the first half of the day, I advise you to postpone selling until a new major resistance at 1.3826. I also recommend opening short positions from there only if a false breakout is formed. Selling GBP/USD immediately on a rebound is possible from a new weekly high around 1.3868, counting on a downward correction of 25-30 points within the day. 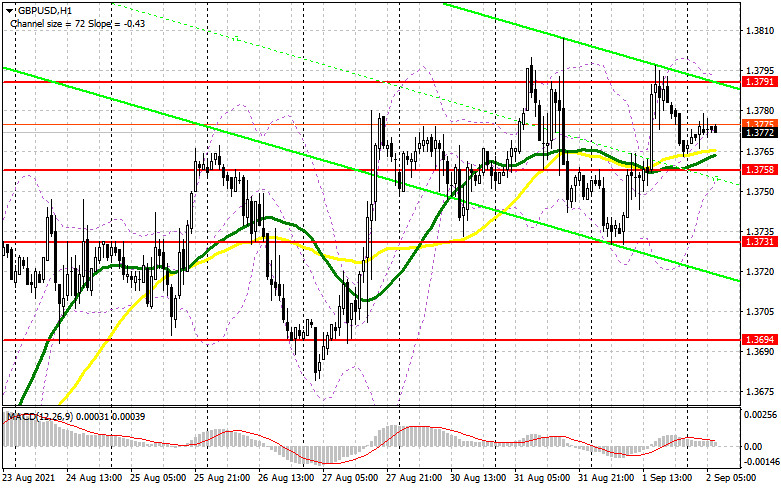 Trading is carried out above 30 and 50 moving averages, which indicates an attempt by the bulls to take the initiative.

Interesting? Write a comment below.
 but bulls are persistent, GBP/USD: plan for the European session on September 2. COT reports. Pound stuck in a horizontal channel
Forward 
Backward 