GBP/USD: plan for the European session on September 20. COT reports. Pressure on the pound may persist. Aim for support at

Last Friday, an instant sell-off in the British pound in the afternoon led to a breakthrough of large weekly lows and a rapid decline in the pair. GBP/USD is still under pressure in today's Asian session, which indicates further development of the bear market, formed in mid-September this year. There is no important data on the UK today, so it will be rather difficult for the bulls to expect a quick return of the pair to the horizontal channel. It will be possible to speak about stopping the downward trend only if GBP/USD settles above the resistance of 1.3722, which was formed following the results of today's Asian session. Only a test of this level from top to bottom can create a good entry point into long positions with the goal of returning to the level of 1.3748, slightly above which the moving averages pass. The succeeding target will be the 1.3773 high, where I recommend taking profits. An acceptable strategy for buying the pound would be to drop it in the first half of the day and form a false breakout at the level of 1.3696. If the pressure on GBP/USD persists in the first half of the day, and the bulls are not active in the area of this support, the optimal scenario will be long positions from the level of 1.3672. But you can also buy the pound there only after forming a false breakout. I advise you to open long positions in GBP/USD immediately for a rebound in the 1.3645 area, or even lower - from 1.3623, counting on an upward correction of 15-20 points within the day. 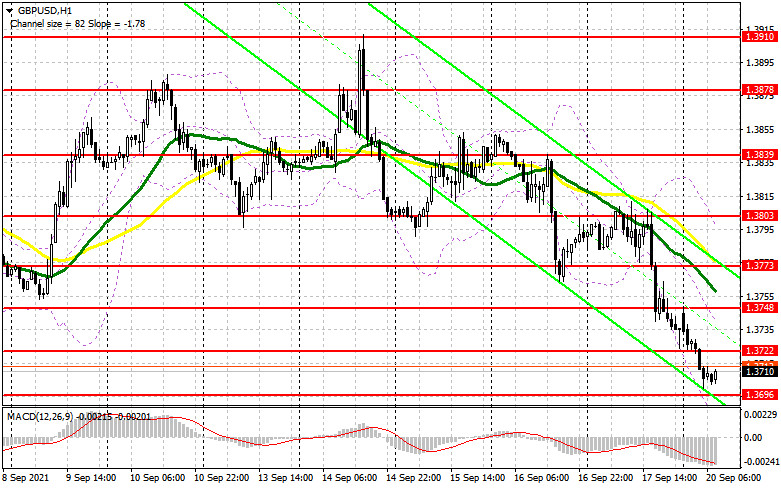 The initial task of the bears is to protect resistance at 1.3722, which the bulls will be focusing on in the first half of the day. The absence of fundamental statistics on the UK will play into the hands of the bears, therefore, a false breakout at the level of 1.3722 will weaken the pound's position and push the pair to the first intermediate support at 1.3696. A breakthrough and a test of this area from the bottom up creates another entry point into short positions, which will push GBP/USD even lower - to 1.3672, and there it is close to the 1.3645 low, where I recommend taking profits. If the bears' are not active around 1.3722 in the first half of the day, I advise you to postpone selling until a new major resistance at 1.3748. I also recommend opening short positions from there only if a false breakout is formed. Selling GBP/USD immediately on a rebound is possible from a new high in the 1.3773 region, counting on a downward correction of 25-30 points within the day.

Trading is carried out below 30 and 50 moving averages, which indicates the formation of a new downward trend for the pair.

Interesting? Write a comment below.
 GBP/USD: plan for the European session on September 20. COT reports. Pressure on the pound may persist. Aim for support at
Forward 
Backward 