GBP/USD: plan for the European session on September 21. COT reports. Pound continues to experience problems and aims for

Yesterday, bulls only managed to defend their local lows with great difficulty. In total, several signals were generated to enter the market. I suggest looking at the 5-minute chart and sorting them all out. In my morning forecast, I paid attention to long positions in the support area of 1.3672. You can clearly see how the bears failed to push the pair below 1.3672 several times, as the bulls kept returning the pair to this range, forming a good signal to open long positions. After that, there is an increase to the resistance area of 1.3696, to which the main emphasis was shifted in the afternoon. Failure to settle above this range and a false breakout there resulted in creating an excellent entry point to short positions further along the trend, after which the pound dipped to daily lows again and even updated them, making it possible to take about 50 points from the market.

Before examining the technical picture of the pound, let's take a look at what happened in the futures market. The Commitment of Traders (COT) reports for September 14 revealed a sharp positive dynamics in net position and a rather large inflow of long non-commercial positions along with a decrease in short ones. And although the British pound remains under pressure against the US dollar, the clear decline in the trading instrument indicates a rather high interest in long positions on the part of major players. It is possible that the sharp rise in inflation in the UK forced many traders to reconsider their attitude towards the Bank of England's monetary policy in the direction of its possible tightening. However, the fact that BoE representatives are in no hurry to talk about these changes affects the activity of traders. I advise you to continue with the strategy of buying the pound in case of any good decline. The lower the pound falls, the more active buyers of risky assets will begin to show themselves, betting on real changes in the BoE's monetary policy in the future. The COT report indicated that long non-commercial positions sharply rose from 29,348 to 44,161, while short non-commercial positions fell 53,872 to 39,371, indicating an advantage towards buyers of the pound and offsetting the market situation. As a result, the non-commercial net position returned to a positive value and rose from -24,524 to 4,790 a week earlier. Last week's closing price remained practically unchanged and reached 1.3837 against 1.3838 a week earlier. 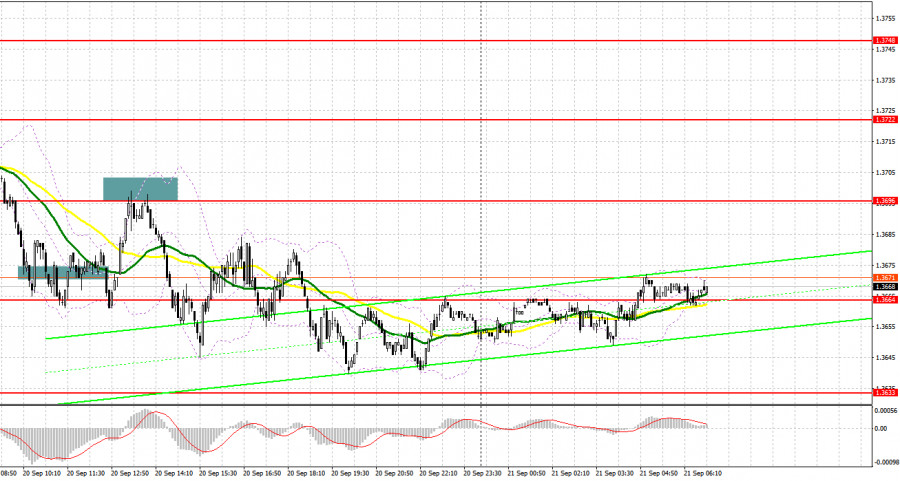 Today we only expect a report on lending, which, most likely, will not have an important impact on the pound's direction, which is preparing for another fall to local lows. However, the growth of net borrowed funds of the public sector will have a positive effect on the pound's quotes, as well as the data on the balance of industrial orders from the Confederation of British Industrialists. The bulls need to be more active in the resistance area of 1.3678 for an upward correction, where the moving averages of the limiting upward potential pass. Only a breakout and reverse test of this level from top to bottom can form a new signal to buy GBP/USD, which will push the pair even higher - to the 1.3713 area. A breakthrough of this area will open a direct path to a large resistance at 1.3748, where I recommend taking profits. The succeeding target will be the high at 1.3773. If the pressure on the pair returns in the first half of the day, and the data disappoints traders, I advise you not to rush into long positions. An important task for the bulls will be to protect support at 1.3643, which helped out several times yesterday. Only a false breakout there can create a good entry point into long positions. Otherwise, a test of the next support at 1.3603 will be the optimal buying scenario, but even there it is best to wait for a false breakout to form. I advise you to watch buying GBP/USD immediately for a rebound only from a low like 1.3562, counting on an upward correction of 25-30 points within the day.

The bears still control the market, but it is clearly not worth delaying the lack of active action. The bears' primary task is to control the new support level of 1.3643, which was formed at the end of yesterday. A breakthrough of this area and its reverse test from the bottom up will generate a signal to open short positions in hopes of a further decline along the trend to the level of 1.3603. A breakthrough of this range, along with weak data from the UK and a similar scenario, will create another entry point to short positions with the goal of breaking the bulls' stop orders and a larger fall to the area of the low of 1.3562, where I recommend taking profits. In case the pound recovers in the first half of the day and we receive strong data on lending growth in the UK, which will contribute to higher costs, only a false breakout in the resistance area of 1.3678, where the moving averages are, will be a signal to sell GBP/USD. I advise you to open short positions in the pound immediately on a rebound from a larger resistance at 1.3713, or even higher - from a high like 1.3748, counting on the pair's rebound down by 20-25 points within the day. 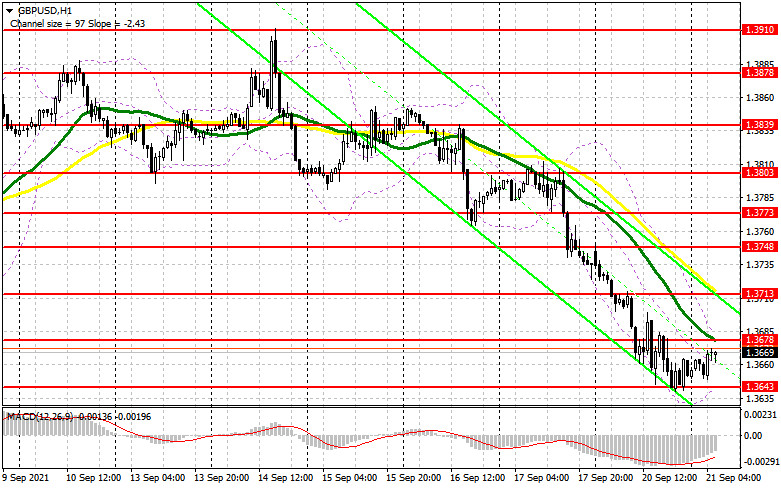 Trading is carried out below 30 and 50 moving averages, which indicates a continued bear market.