GBP/USD: plan for the European session on September 22. COT reports. Pound still has problems with growth. Bears are one

Since bulls on the pound did not try to build a new upward correction in the first half of the day, nothing good came of it. The bears returned during the US session, generating several signals to open short positions. Let's take a look at the 5 minute chart and see what happened. In my morning forecast, I paid attention to the 1.3678 level and advised you to make decisions on entering the market. A rather interesting situation occurred where two different signals were formed at the same level. During the first test of resistance at 1.3678, a false breakout was formed, which resulted in creating a signal to sell the pound further along the trend. However, the pair did not significantly fall, and after going down 13 points, the demand for the pound returned. After some time, a breakthrough and reverse test of 1.3678 from top to bottom took place, which resulted in creating a buy signal, but even here the bulls failed to offer anything against the trend. During the US session, a breakthrough and reverse test of 1.3664 formed an excellent entry point for short positions, which pushed the pound to fall by 25 points. A similar formation closer to the end of the day pushed the pound down by only 10 points. 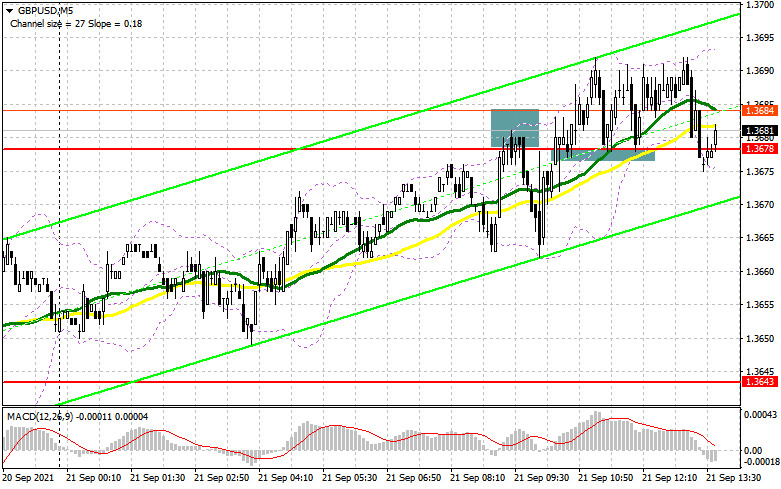 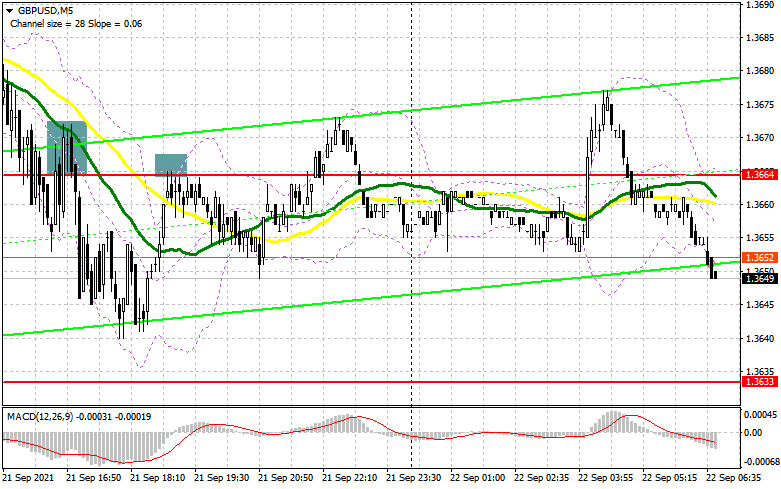 No important data on the UK today, so the focus will shift to the results of the Federal Reserve's two-day meeting on monetary policy. We'll talk more about it in the afternoon forecast. In the meantime, bulls on the pound need to do their best to prevent a breakdown of the important local low of 1.3642. Only a false breakout there can generate a signal to open long positions against the trend, which will lead to an upward correction to the area of the intermediate resistance at 1.3674. Considering that there are no fundamental reports today, it is unlikely for the bulls to rise above this range so easily. Only a test of this level from top to bottom can create another entry point into long positions in hopes of stopping the bearish trend and with the goal of returning to the level of 1.3713. The succeeding target will be the 1.3752 high, where I recommend taking profits. If the pressure on GBP/USD persists in the first half of the day, and the bulls are not active in the support area of 1.3642, it is best not to take risks with long positions against the trend. The optimal scenario would be to buy the pound from the level of 1.3603, but only after forming a false breakout. I advise you to open long positions in GBP/USD immediately on a rebound in the 1.3552 area, or even lower - from 1.3530, counting on an upward correction of 15-20 points within the day.

The initial task of the bears is to protect the resistance at 1.3674, which bulls will be focusing on in the first half of the day. The absence of fundamental statistics on the UK will play into the hands of the bears, therefore, forming a false breakout at 1.3674 will weaken the pound's position and push the pair to an important support at 1.3642, which has been sought after for the third day. A breakthrough and test of this area from the bottom up will create another entry point into short positions, which will push GBP/USD even lower – to 1.3603, and there it is close to the 1.3562 low, where I recommend taking profits. In case there are active short positions on the pound, a low like 1.3530 will be a long-term target. If the bears are not active around 1.3674 in the first half of the day, I advise you to postpone the short position to a new large resistance of 1.3713. I also recommend opening short positions from there only if a false breakdown is formed. You can sell GBP/USD immediately on a rebound from the high in the area of 1.3752, counting on a downward correction of 25-30 points within the day. 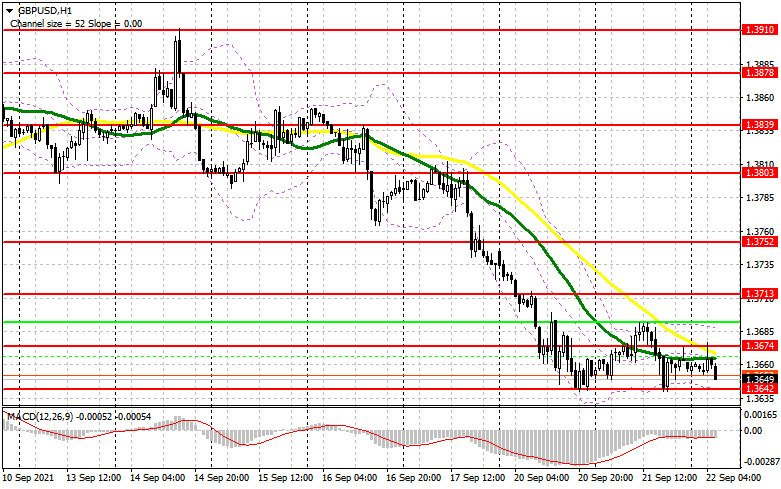 Trading is carried out below 30 and 50 moving averages, which indicates the formation of a downward trend for the pair.

Interesting? Write a comment below.
 GBP/USD: plan for the European session on September 22. COT reports. Pound still has problems with growth. Bears are one
Forward 
Backward 