Quite a lot of profitable signals to buy the pound were formed yesterday, but all of them were in the afternoon after the Bank of England's meeting on monetary policy. Let's take a look at a 5-minute chart and talk about where and how you could enter the market. In my morning forecast, I paid attention to the level 1.3649 and advised you to make decisions on entering the market. A breakthrough of this range, unfortunately, did not result in creating a signal to open long positions in the first half of the day, since literally a couple of points were missing before the reverse test of this level, and trading against the trend without clear confirmation of signals is not a good idea. Therefore, I missed this upward movement. After the news that the Bank of England raised the topic of raising interest rates in November this year, the pound continued to actively rise. Forming a false breakout at the level of 1.3654 resulted in creating the first entry point into long positions. Then there was a breakthrough and a reverse test of 1.3696 - again buying the pound. And the final was the breakthrough and test of the 1.3727 level, which also provided a good entry point into long positions. As a result, all of the pound's movement after the BoE's decision was taken away.

Today we expect to receive a report on retail sales from the Confederation of British Industrialists, as well as a speech by Silvana Tenreyro, a member of the ILC of the Bank of England, who may further shake the markets with her statements on monetary policy, which will pushed the pound to rise in the short term. It is best to bet on strengthening the pair. The optimal scenario for opening long positions will be a false breakout in the support area of 1.3708, to which the British pound is gradually heading. In this case, we can count on further growth to the resistance of 1.3747, which became problematic for the bulls in yesterday's US session. Only a breakthrough of this level and a top-down test will create another entry point to long positions with the goal of rising towards highs like 1.3774 and 1.3803, where I recommend taking profits. If the pressure on GBP/USD persists in the first half of the day, and the bulls are not active in the support area of 1.3708, it is best not to rush with long positions, as yesterday's bullish movement can crumble very quickly. The optimal scenario would be buying the pound from the level of 1.3670, slightly above which the moving averages are, playing on the side of the bulls. I advise you to open long positions in GBP/USD immediately on a rebound in the 1.3635 area, or even lower - from 1.3604 with the goal of an upward correction of 15-20 points within the day. 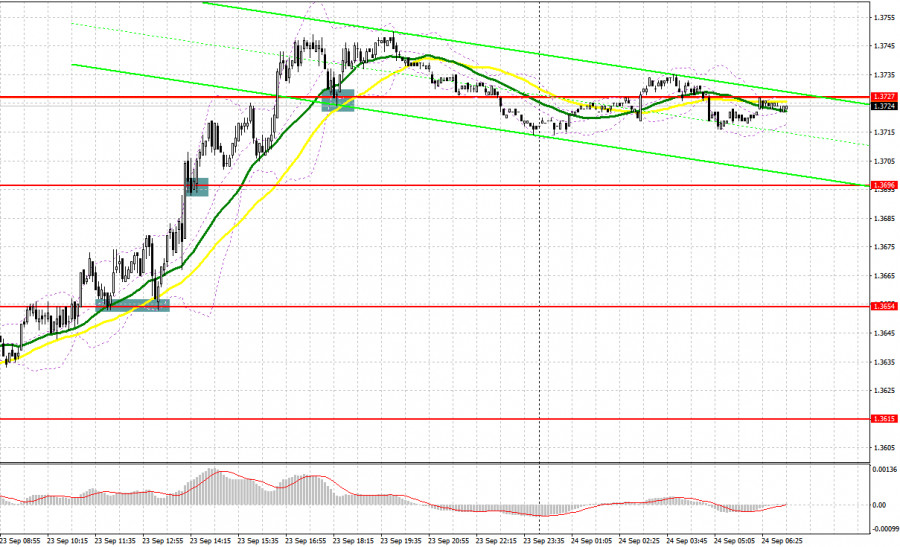 The initial task of the bears is to protect resistance at 1.3747, which the bulls will be focusing on in the first half of the day. Forming a false breakout at this level, along with weak fundamental data on retail sales, can seriously harm the short-term plans of the bulls, which creates an excellent entry point into short positions with the goal of moving to the support area of 1.3708. This level is very important for the bulls who will try to build the lower boundary of a new rising channel there. Therefore, the bears' goal is to break through and test this area from the bottom up, which will hit the stop orders of speculative bulls and form an additional entry point into short positions with the goal of pulling down GBP/USD even lower - to 1.3670. With very active short positions on the pound during the speech of BoE representatives, the next target will be the 1.3635 low. If the bears are not active in the area of 1.3747 in the first half of the day, I advise you to postpone short positions until a new large resistance at 1.3774 during the test of which divergence may form on the MACD indicator, indicating that the pound is overbought. I also recommend opening short positions from there only if a false breakout is formed. Selling GBP/USD immediately on a rebound is possible from the high in the 1.3803 area, counting on a downward correction of 25-30 points within the day. 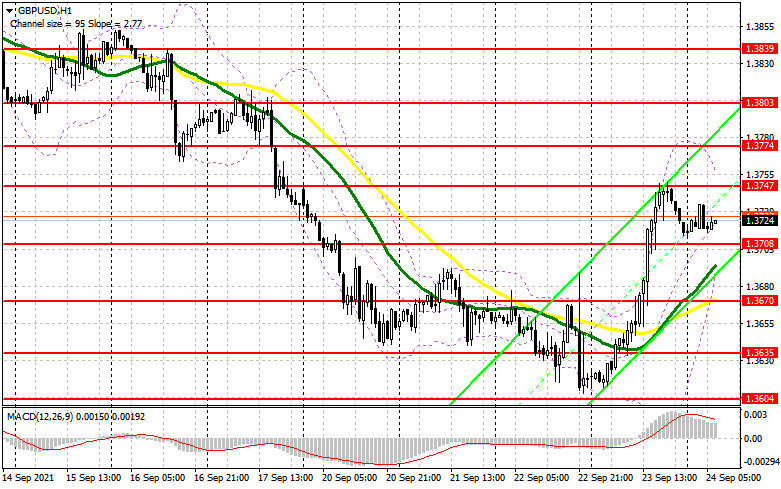 Trading is carried out above 30 and 50 moving averages, which indicates the build up of an upward correction for the pair, which has been asked for quite a long time.

A breakthrough of the upper border of the indicator in the area of 1.3747 will lead to a new will of the pound's growth. In case the pair falls, support will be provided by the lower border at 1.3690.