GBP/USD: plan for the European session on September 27. COT reports. Pound bulls could not stand the pressure. Bears aim

Last Friday, a purely bearish scenario came true, as bulls of the pound, after the Bank of England meeting, did not manage to stay at weekly highs for a long time. Let's take a look at the 5 minute chart and see what happened. In my morning forecast, I talked in detail about two scenarios that could be realized. It is clearly seen how the descent to support at 1.3708 and the formation of a false breakout on it gives an excellent signal to enter long positions in hopes of continuing the bull market that we saw yesterday. But I also warned that if we do not see active long positions and rapid growth from 1.3708, then the bulls will have very serious problems. This is exactly what happened: after several vague attempts to rise, the pound finally settled below 1.3708, and the test of this level from the bottom up created an excellent entry point already into short positions. As a result, in the second half of the day, the pair fell down to support 1.3670 and even went below this range, allowing it to take about 50 points of profit. A return to this level closer to the middle of the US session and a top-down test created an entry point for long positions, which led to an upward correction by 20 points.

There are no major reports on the UK economy today, but Bank of England Governor Andrew Bailey speaks out to shed light on recent interest rate hikes in November this year. If a more specific position is seen in his speech, the demand for the British pound will return quickly enough, which can push the pair to rise. Now the optimal scenario for opening long positions is the formation of a false breakout in the support area of 1.3650. In this case, we can count on the pair's growth to the resistance of 1.3693, where the moving averages are located, limiting the pound's upward correction. Only a breakthrough of this level and a top-down test will form an additional entry point into long positions as we aim for the pair to rise to the highs of 1.3734 and 1.3774, where I recommend taking profits. If the pressure on GBP/USD persists in the first half of the day, and the bulls are not active in the support area of 1.3650, it is best not to rush with long positions. The optimal scenario would be buying the pound from last week's lows in the 1.3614 area, but this is unlikely to build a strong upward momentum, since the 1.3614 test will be evidence of a resumption of a large bearish trend. I recommend opening long positions in GBP/USD immediately on a rebound in the 1.3574 area, or even lower - from 1.3530, counting on an upward correction of 15-20 points within the day. 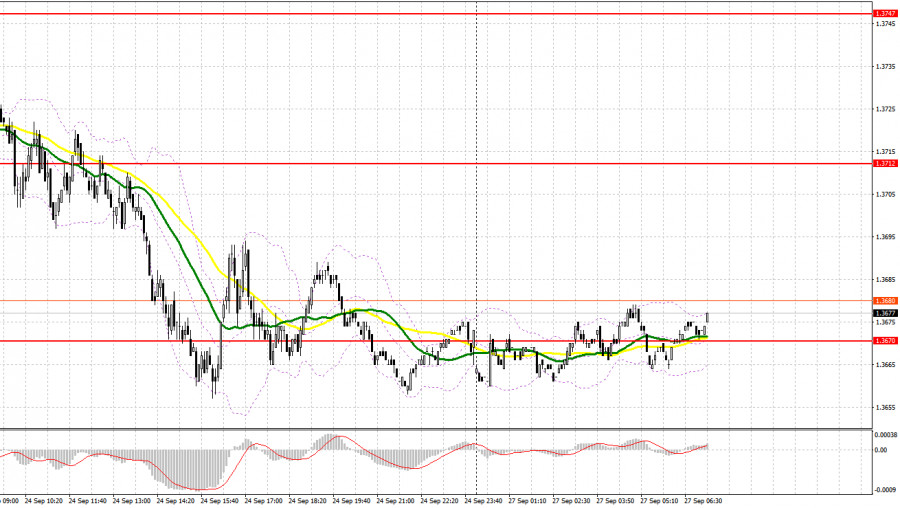 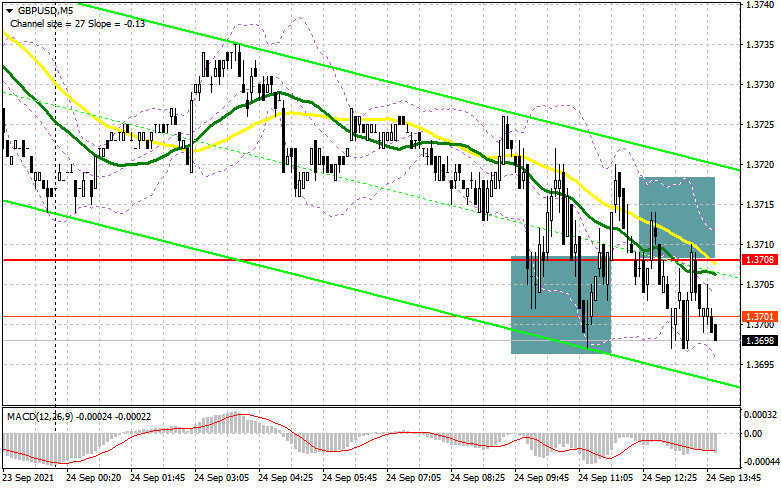 The initial task of the bears is to protect the resistance at 1.3693, where the moving averages are located, playing on their side. Forming a false breakout at this level can seriously harm the bulls' plans, who are counting on the resumption of the bullish trend today after Bailey's speech. In this case, we can expect a further decline in GBP/USD to the support area of 1.3650, where the lower border of the new rising channel formed last Thursday passes. A breakthrough and reverse test of this area from the bottom up will hit the stop orders of speculative bulls and form an additional entry point to short positions with the goal of pulling down GBP/USD even lower - to 1.3614. Going beyond this range will only be a matter of time. With very active short positions on the pound during Bailey's speech, the next target will be the 1.3575 low, where I recommend taking profit. If the bears are not active in the area of 1.3693 in the first half of the day, I advise you to postpone short positions to a new large high of 1.3734. I also recommend opening short positions from there only if a false breakout is formed. Selling GBP/USD immediately on a rebound is possible from the high in the 1.3774 region, counting on a downward correction of 25-30 points within the day. 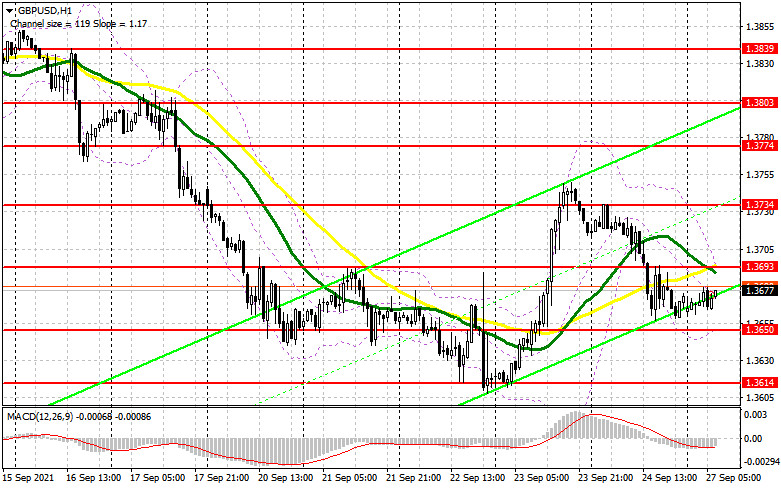 Trading is carried out below 30 and 50 moving averages, which indicates an attempt by the bears to take the market under their control.

A breakthrough of the upper border of the indicator in the area of 1.3693 will lead to a new will of the pound's growth. Surpassing the lower boundary at 1.3650 will increase the pressure on the pair.