GBP/USD: plan for the European session on September 28. COT reports. Pound bulls have a chance for continued growth. Need

Yesterday there was an active struggle for the market between bulls and bears, and judging by what is now seen on the chart, the former won. However, the bulls need to surpass 1.3726 for a final victory, the bulls need to surpass 1.3726. In yesterday's morning forecast, I paid attention to the 1.3693 level and advised you to make decisions on entering the market. Let's take a look at the 5-minute chart and figure out what ultimately happened. The first test of resistance at 1.3693 resulted in forming a false breakout at this level, which was a very good signal to open short positions in continuation of the bear market, which formed at the end of last week. However, it didn't come to a big sale, and after a while the bulls reached the breakdown of 1.3693, following stop orders. A reverse test of this level from top to bottom formed an entry point into long positions, after which the pound went up about 35 points, but that was all. The active protection of the resistance at 1.3706 eventually resulted in forming sell signals, however, I did not wait for a major sell-off from this level.

Before examining the technical picture of the pound, let's take a look at what happened in the futures market. The Commitment of Traders (COT) reports for September 21 revealed both a sharp rise in short ones and an increase in those who bet on the pound's further growth. The Bank of England's monetary policy meeting last week had a significant impact on the sentiment of risky asset buyers. The decision to raise rates in November this year will provide support to bulls in case of any serious downward corrections in the pair, so it is best to bet on the growth of GBP/USD in the medium term. Deterioration in inflationary matters may force the BoE to act more aggressively, which is also another signal to buy the pound. The only problem that stands in the way of the bulls is the Federal Reserve, although it is not going to raise interest rates yet, but is also following the path of tightening monetary policy. The lower the pound falls, the more active buyers of risky assets will be, betting on real changes in the BoE's monetary policy in the future. The COT report indicated that long non-commercial positions rose from 44,161 to 51,910, while short non-commercials jumped almost one and a half times from 39,371 to 52,128, leading to a complete surrender of the bulls' advantage in the market and preponderance towards the bears. As a result, the non-commercial net position returned to its negative value and dropped from the level of 4,790 to the level of -218. The closing price of GBP/USD dropped 1.3837 to 1.3662 last week. 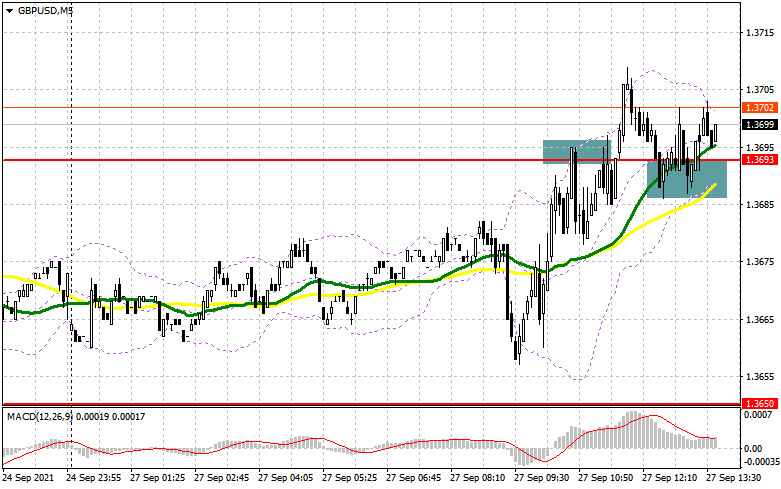 Today there are no important fundamental statistics on the UK and only a speech by the member of the Monetary Policy Committee of the BoE Catherine L. Mann will take place, who will make a speech on the topic of economic outlook and will certainly touch on the topic of inflation. This can lead to a surge in market volatility. The resistance of 1.3726 keeps the bulls from further upward correction, which they will focus on this morning. Only a breakthrough and reverse test of this level from top to bottom creates a new signal to buy GBP/USD, which will push the pair even higher - to the 1.3762 area. A test of this area will be evidence of the continuation of the bullish trend formed last Thursday after the BoE meeting. A breakdown of this area will also open a direct path to the large resistance at 1.3803, where I recommend taking profits. The next target will be the high at 1.3839. If the pressure on the pair returns in the first half of the day, and the statements of the BoE representative disappoint traders, I advise you not to rush into long positions. An important task for the bulls will be to protect the support at 1.3689, where the moving averages, playing on the side of the bulls, pass. Only a false breakout there forms a good entry point into long positions. Otherwise, the optimal buying scenario will be the test of the next support at 1.3653, but even there it is best to wait for a false breakout to form. I advise you to watch long positions of GBP/USD immediately for a rebound only from a low like 1.3614, counting on an upward correction of 25-30 points within the day. It should be borne in mind that the renewal of this area will be evidence of the continuation of the September bearish trend. 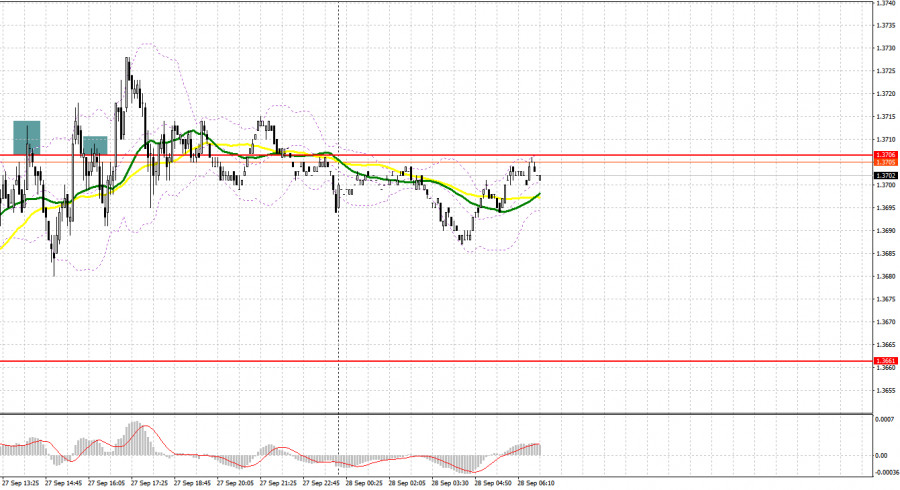 The bears still control the market, but it is clearly not worth delaying with the lack of active action. The primary task is to control the new support level at 1.3689, which coincides with the lower boundary of the upward correction channel formed on September 23rd. A breakthrough of this area and its reverse test from the bottom up will generate a signal to open short positions in hopes that the pair would fall further along the trend to the level of 1.3653. A breakthrough of this range, which may take place in the afternoon during the speech of Fed representatives, will form another entry point to short positions with the goal of breaking the bulls' stop orders and a larger fall to the area of the low of 1.3614, where I recommend taking profits. If the pound recovers in the first half of the day, only a false breakout in the resistance area of 1.3726 will be a signal to sell GBP/USD. I advise you to open short positions in the pound immediately on a rebound from a larger resistance at 1.3762, or even higher - from a high of 1.3803, counting on the pair's rebound down by 20-25 points within the day. 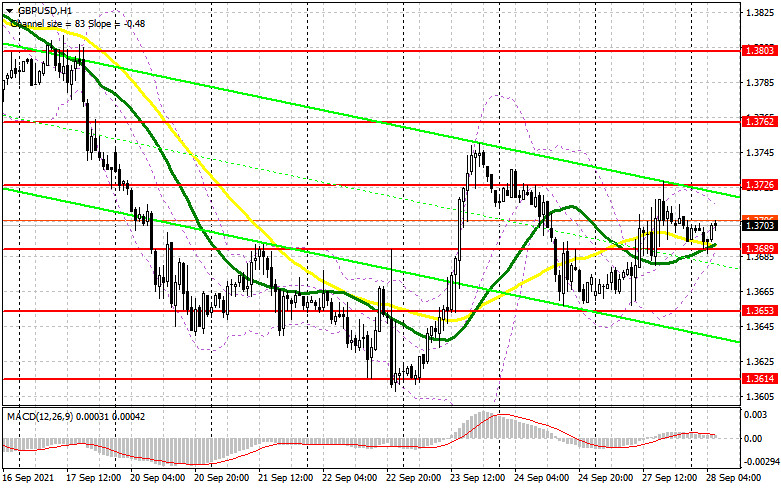 Trading is carried out above 30 and 50 moving averages, which indicates a slight preponderance of the pound bulls in the current situation.