GBP/USD: plan for the European session on September 29. COT reports. Fuel crisis in the UK led to the pound's collapse by

The fact that the UK authorities failed to quickly deal with the fuel crisis has led to the largest sell-off of the British pound against the US dollar in recent memory. In yesterday's forecast, I drew attention to the 1.3689 level and advised you to make decisions on entering the market. Let's take a look at the 5-minute chart and figure out what ultimately happened. The breakthrough and reverse test of this level from the bottom up resulted in forming an excellent entry point into short positions. As a result, the pound fell by more than 80 points in the first half of the day, where the pressure eased. The breakthrough of support at 1.3595 in the afternoon increased pressure on the pair, which led to another large wave of the pound's decline to the 1.3530 low, where the bulls managed to stop the downward trend. At the moment, those who want to buy GBP/USD have clearly diminished, so I advise you to be careful with long positions and not go into the market against the trend. Among the reports in the morning, it is worth paying attention to the volume of net loans to individuals and the number of approved applications for a mortgage loan in the UK. However, this data is unlikely to somehow help the bulls whose initial goal is to regain control over the resistance at 1.3559. But, before thinking about buying, it would be worthwhile to properly prepare for protecting support at 1.3521. Only a false breakout there generates a signal to open long positions against the trend in hopes of a recovery to 1.3559. A breakthrough and test of this level from top to bottom will create another entry point to long positions with the goal of an upward correction to the intermediate resistance at 1.3586, slightly above which the moving averages, playing on the side of the bears, pass. The next target will be the area of 1.3613, where I recommend taking profits. If the GBP/USD pair falls further in the morning along the trend, it is best not to rush with long positions. The optimal scenario would be buying the pound from the 1.3485 low. I advise you to open long positions in GBP/USD immediately on a rebound in the 1.3452 area, or even lower - from 1.3372, counting on an upward correction of 15-20 points within the day. 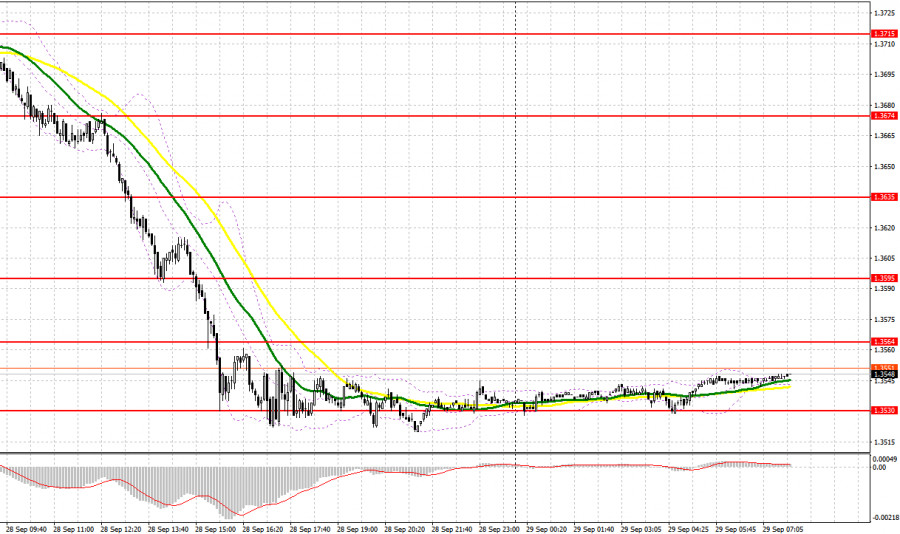 The initial task of the bears is to protect the resistance at 1.3559. A little higher is the area of 1.1586, where the moving averages are located, playing on the side of the bears, so only a false breakout at these levels can seriously harm the plans of the bulls, who are counting on a correction today after yesterday's fall. If the bears manage to protect the above levels, then we can expect a further decline in GBP/USD along the trend to the area of the monthly low of 1.3521. A breakthrough and reverse test of this area from the bottom up, along with weak lending data in the UK and a worsening situation with the fuel crisis - all this will hit the bulls' stop orders and form an additional entry point into short positions with the aim of pulling down GBP/USD even lower - to 1.3485... Going beyond this range will only be a matter of time. With very active sales of the pound during the speech of Bank of England representatives, the next target will be the low of 1.3452, where I recommend taking profit. If the bears are not active in the area of 1.3559 and 1.3586 in the first half of the day, I advise you to postpone selling to a large high of 1.3613. I also recommend opening short positions from there only if a false breakout is formed. Selling GBP/USD immediately on a rebound is possible from the high in the 1.3643 region, counting on a downward correction of 25-30 points within the day. 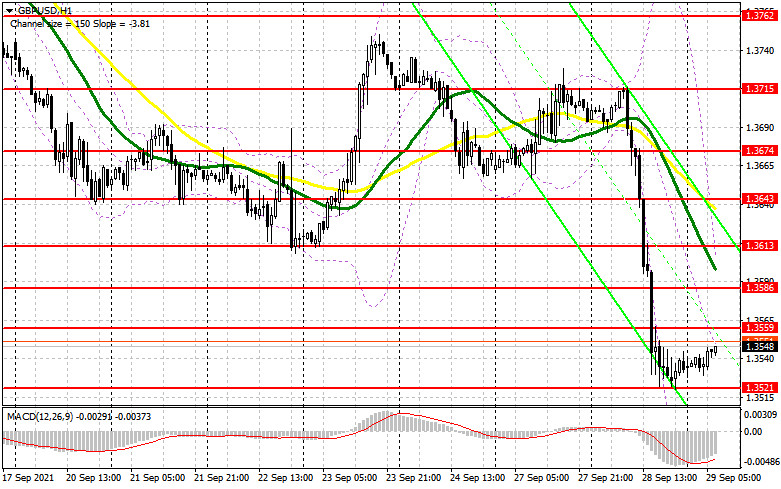 The Commitment of Traders (COT) reports for September 21 revealed both a sharp rise in short ones and an increase in those who bet on the pound's further growth. The Bank of England's monetary policy meeting last week had a significant impact on the sentiment of risky asset buyers. The decision to raise rates in November this year will provide support to bulls in case of any serious downward corrections in the pair, so it is best to bet on the growth of GBP/USD in the medium term. Deterioration in inflationary matters may force the BoE to act more aggressively, which is also another signal to buy the pound. The only problem that stands in the way of the bulls is the Federal Reserve, although it is not going to raise interest rates yet, but is also following the path of tightening monetary policy. The lower the pound falls, the more active buyers of risky assets will be, betting on real changes in the BoE's monetary policy in the future. The COT report indicated that long non-commercial positions rose from 44,161 to 51,910, while short non-commercials jumped almost one and a half times from 39,371 to 52,128, leading to a complete surrender of the bulls' advantage in the market and preponderance towards the bears. As a result, the non-commercial net position returned to its negative value and dropped from the level of 4,790 to the level of -218. The closing price of GBP/USD dropped 1.3837 to 1.3662 last week.

Trading is carried out below 30 and 50 moving averages, which indicates a downward trend.

In case of growth, the upper border of the indicator in the area of 1.3586 will act as a resistance. A breakthrough of the lower border at 1.3515 will increase the pressure on the pair.

Interesting? Write a comment below.
 GBP/USD: plan for the European session on September 29. COT reports. Fuel crisis in the UK led to the pound's collapse by
Forward 
Backward 