GBP/USD: plan for the European session on September 3. COT reports. Pound broke out to new highs from the horizontal channel,

Yesterday, the British pound broke out from the horizontal channel to reach new highs, but will the bulls have enough strength to stay there? there was no significant activity in the GBP/USD pair in the first half of the day, however, closer to the second half of the day, a false breakout was formed at the level of 1.3791. Let's take a look at the 5 minute chart and figure it out. It can be clearly seen how the bears managed to return under the 1.3791 level and formed an excellent entry point into short positions from there. However, no matter how hard they tried, they failed to achieve a major downward movement. After a slight correction of 10 points, the bulls managed to regain control of 1.3791 and build a new intraday upward trend. Unfortunately, the reverse test of 1.3791 did not take place, therefore, there was no signal for entering the market with long positions.

Today, traders will focus on the PMI report for the UK services sector in the morning. If the indicator exceeds the forecasts of economists, it is a direct signal for the buildup of long positions. In this case, GBP/USD bulls need to settle above the resistance of 1.3858. Only a test of this level from top to bottom will create a good entry point into long positions with the goal of entering a new weekly high at 1.3893 and then at 1.3926, where I recommend taking profits. The next target is still the area of 1.3955, which will be reached only in case of a very weak report on the US labor market. A more acceptable strategy for buying the pound would be its decline in the first half of the day. The optimal scenario for opening long positions is to form a false breakout at the level of 1.3818. There are also moving averages, playing on the side of the bulls, which can help the pound with continuing the upward trend. If the pressure on GBP/USD returns in the first half of the day, and the bulls show nothing in the support area of 1.3818, the optimal scenario will be long positions from the level of 1.3782. But you can also buy the pound there only after forming a false breakout. I advise you to open long positions in GBP/USD immediately on a rebound in the 1.3745 area, or even lower - from 1.3703, counting on an upward correction of 15-20 points within the day. 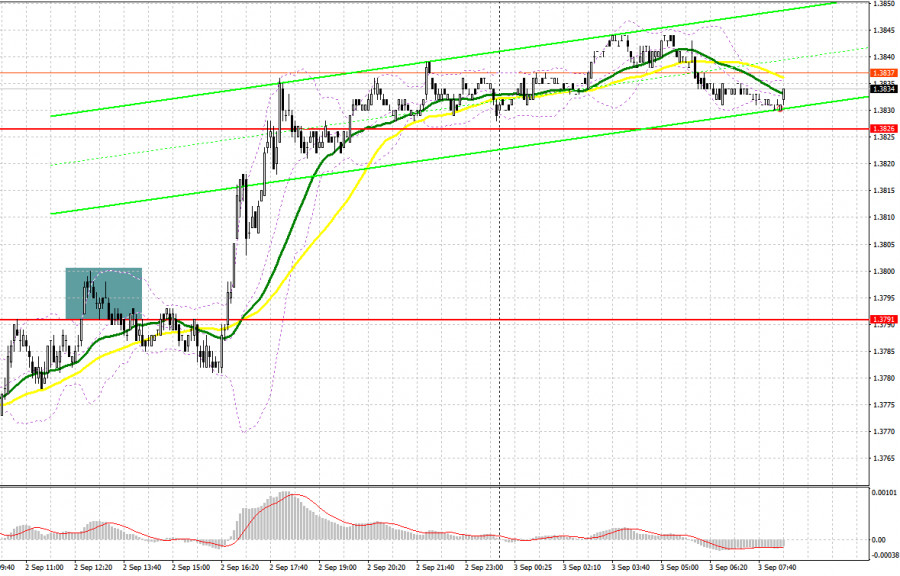 The initial task of the bears is to protect the resistance at 1.3858. Only weak data on PMI for the UK services sector can harm the new upward trend, so it is better not to rush to sell from the level of 1.3858. The optimal scenario for opening short positions is to form a false breakout at this level, which will weaken the pound's position and push the pair to the first intermediate support at 1.3818, just below which passing the moving averages, playing on the side of the bulls. A breakthrough and test of this area from the bottom up creates another entry point into short positions, which will push GBP/USD even lower - to 1.3782, and there it is close to the 1.3745 low, where I recommend taking profits. However, one can count on such a large drop only in case we receive a very good report on the US labor market, which should surpass economists' forecasts. If the bears are not active around 1.3858 in the first half of the day, I advise you to postpone selling until a new major resistance at 1.3893. I also recommend opening short positions from there only if a false breakout is formed. Selling GBP/USD immediately on a rebound is possible from a new high in the 1.3926 area, counting on a downward correction of 25-30 points within the day. 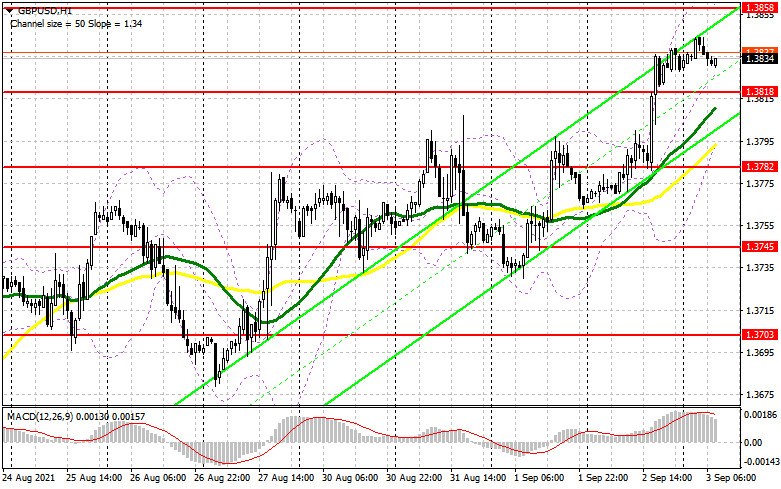 Trading is carried out above 30 and 50 moving averages, which indicates the resumption of the upward trend in the pair.

Interesting? Write a comment below.
 GBP/USD: plan for the European session on September 3. COT reports. Pound broke out to new highs from the horizontal channel
Forward 
Backward 