The market was waiting so much for the US Department of Labor to release its report that it simply ignored all other macroeconomic data. In particular, the final data on business activity indices in the euro area, which turned out to be significantly worse than the preliminary estimate. Thus, the index of business activity in the service sector decreased from 59.8 points to 59.0 points, while it was expected to decrease to 59.7 points. Largely because of this, the composite index of business activity, instead of decreasing from 60.2 points to 59.5 points, fell to 59.0 points. Moreover, the growth rate of retail sales slowed from 5.4% to 3.1%. While at the beginning of the day they were waiting for an acceleration to 5.5%. But this is only in annual terms, whereas on a monthly basis the situation is completely terrifying, since retail sales should have grown by 0.2%, but instead decreased by 2.3%. And if we recall the recent data on inflation, then in the euro area there is simply a rattling mixture of a sharp increase in consumer prices and a rapid decline in consumer activity. Moreover, sales are falling faster than prices are rising. And this is nothing but a reduction in the profits of companies. Perhaps we are already talking about losses. However, despite such weak data, there was no market reaction. 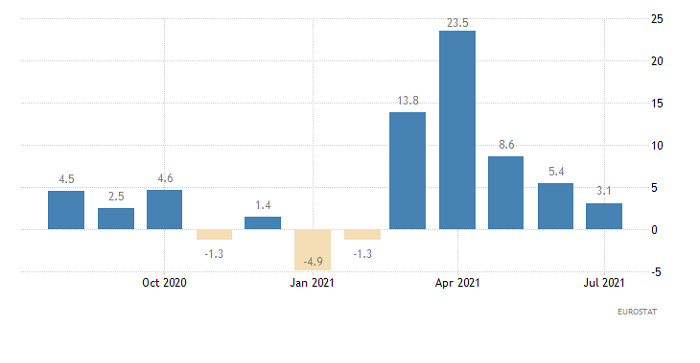 As soon as the US labor report was published, the pound immediately increased. It is quite obvious that the reason for this was new jobs outside of agriculture, of which only 235,000 were created, with a forecast of 750,000. Given the fact that this indicator is largely ahead of schedule, these figures clearly indicate that the unemployment rate will not decrease in the near future. After all, at the current rate of population growth in the United States, such a number of monthly jobs created can only maintain unemployment at the same level. In other words, we are talking about the fact that the recovery of the labor market has simply stopped. This is what scared the market participants, who immediately began to sell the dollar. However, after a while, this process not only stopped, but was replaced by mass purchases. It took investors several hours to comprehend the content of the report, and correlate the number of new jobs directly with the unemployment rate, which fell from 5.4% to 5.2%. The fact is that the unemployment rate in the region of 5.0% is considered optimal for the US labor market, and the current value is incredibly close to it. Simply put, the labor market has fully recovered and reached an optimal state. Consequently, the number of new jobs indicates that it will continue to be in balance. This is exactly what the Federal Reserve needs to start gradually tightening monetary policy. So it is not surprising that the dollar began to strengthen at the end of the day, which will last for several days. Moreover, the macroeconomic calendar is completely empty today, and nothing will interfere with this process. 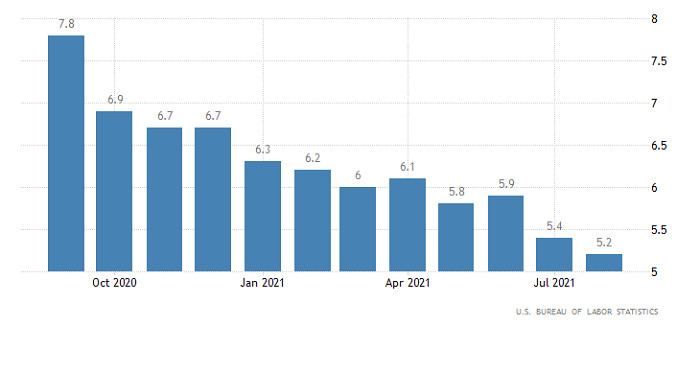 Within two weeks of the correctional course, the EURUSD pair returned to the area of the local high of the previous correction 1.1880/1.1905. This led to a reduction in the volume of long positions and, as a result, to a rebound in the price along a downward trajectory.

The technical indicator RSI at the moment of touching the resistance area reached the overbought line of 70, this became a signal to sell the euro.

The resistance area of 1.1880/1.1905 is in the way of the bulls, which is intertwined with the Fibonacci level 38.2. This heightens interest in short positions, which can lead to a phased decline.

An alternative scenario of the market development will be considered if the price stays above the value of 1.1920 for a four-hour period. Comprehensive indicator analysis provides a sell signal based on short-term and intraday periods due to the price rebound from the resistance area. 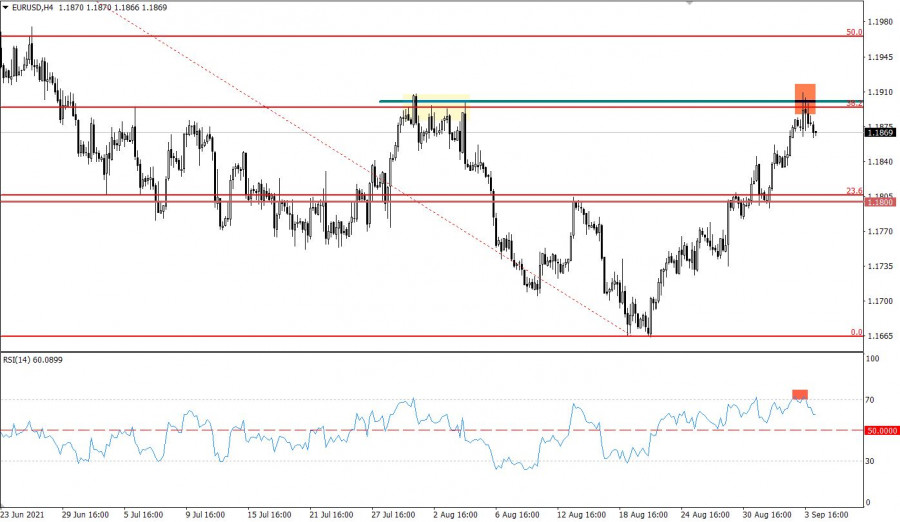