Formally, the parameters of the monetary policy of the Federal Reserve remained unchanged, but instead of growing, the pound continued to decline. The fact is that the US central bank has given answers to a couple of extremely important questions.

The parameters of the quantitative easing program remained the same, but the market as a whole was ready for such a thing. This was one of two possible scenarios. And quite expectedly, Fed Chairman Jerome Powell announced that the issue of curtailing the program will be considered during the November meeting. However, much more than everyone was concerned not so much about the issue of the beginning of the curtailment of the program, but the pace of this process. And the words of Powell were really surprising. Not only will this issue be considered in November, but the program will also be reduced in the same month, and not in December, as previously assumed. In other words, the markets will not have time to prepare. You need to prepare now. In addition, it is planned to completely curtail the program by the middle of next year. So it will be reduced truly at an incredible speed. At the moment, as part of the quantitative easing program, the Fed is pouring in $120 billion a month. If the program will begin to be curtailed in November, and it will be completed in June, then every month the volume of the program will decrease by $15 billion. The curtailment of the previous quantitative easing program was warned for a year, and the process itself took a little more than a year. This time, everything is planned to be done much more quickly.

Also, the Fed has specified its plans to raise the refinancing rate, and if one increase is expected next year, then three at once in 2023. To summarize all of the above, the US central bank literally announced a fairly large-scale tightening of monetary policy, which will begin in just one and a half to two months. So the number of free dollars on the market will begin to decline rapidly before the end of this year. There is practically no time left for preparation. In other words, the dollar will continue to grow actively, and the pound's growth potential is extremely limited. Most likely, it will be exclusively temporary, more like small local rebounds. That is, the trend for the strengthening of the dollar continues.

The main event of today is the meeting of the Board of the Bank of England, the results of which are likely to further aggravate the situation of the pound. It is clear that the British central bank will not change anything. This has been clear for a long time. But the Fed, although it left everything as it is, quite clearly announced its plans, thereby warning the markets about what to prepare for. The BoE needs to do the same. That is, to announce plans to tighten their own monetary policy. However, the probability of such a development of events tends to zero. In recent years, the British central bank has been trying to avoid any mention of such a possibility in principle, and takes an exclusively wait-and-see position, preferring to act after the fact, following the specific actions of the European Central Bank and the Fed. In the light of the results of the meeting of the Federal Committee on Open Market Operations, such a position is extremely weak, and will have a detrimental effect on the pound.

In addition, preliminary estimates of business activity indices are published today, both in Europe and in the United States. But it is not worth focusing on them, since in both cases the indices should show a widespread decline. But the data on applications for unemployment benefits will contribute to the further growth of the dollar. The number of initial requests should be reduced by 22,000, and repeated requests by 115,000. So the US labor market continues to recover confidently, and this is the main condition for the start of tightening the monetary policy of the Fed. In other words, nothing hinders the implementation of the plans announced yesterday. 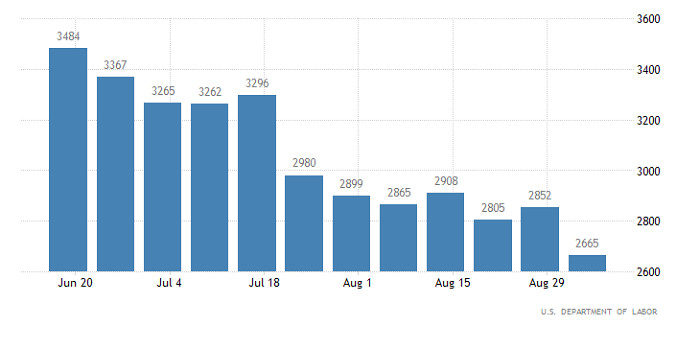 Despite the high oversold level, the GBPUSD pair continued its gradual decline. As a result, the quote came close to the local low of August 20 - 1.3600, where a slight rollback occurred.

The RSI technical indicator has confirmed the rollback stage by a temporary exit from the oversold zone.

Based on the daily period, there is a complete recovery of dollar positions relative to the correction in the period from August 23 to September 3. This means that the downward trend cycle from early June is still relevant in the market.

A pullback from the 1.3600 area may well turn out to be a temporary phenomenon and serve as a regrouping of trade forces. The bears still have a leading position in the market, so it is possible that the price will return to the area of 1.3600, with an attempt to break through it.

Comprehensive indicator analysis gives a buy signal based on a short-term period due to a temporary price pullback. Technical instruments in the intraday and medium-term periods signal to sell, due to the downward cycle. 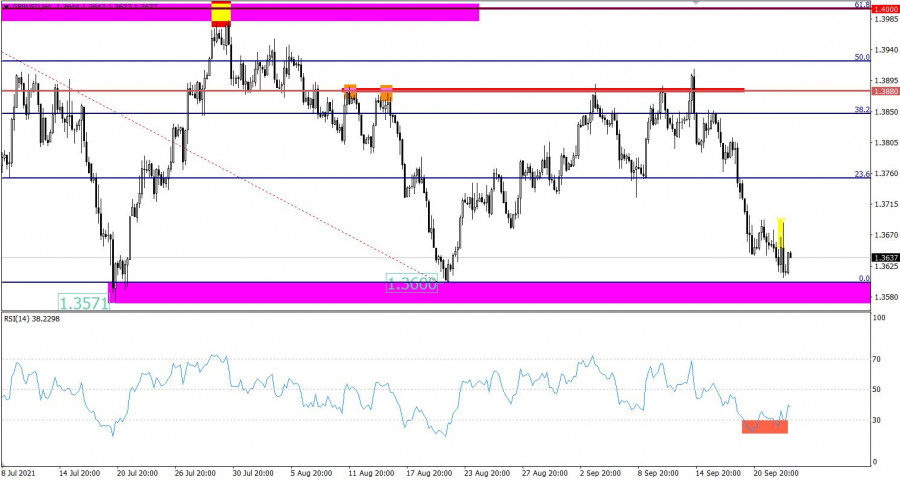