How to trade the EUR/USD currency pair on September 6? Simple tips for beginners

30M chart of the EUR/USD pair. 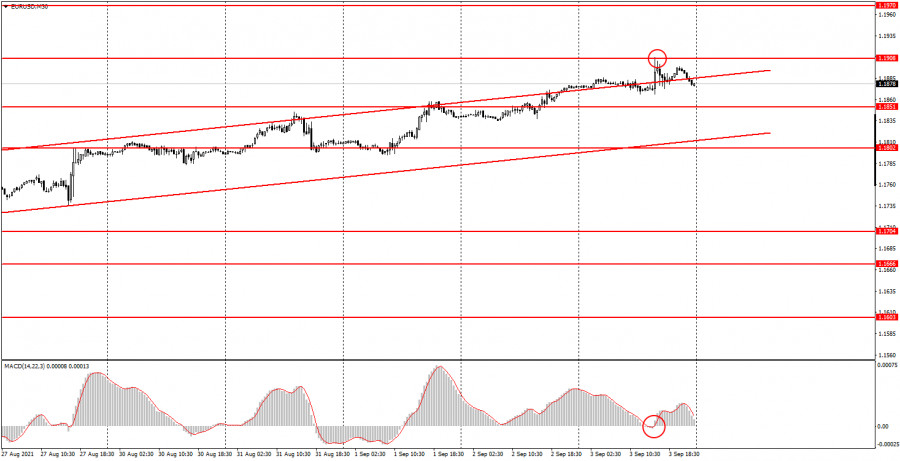 The EUR/USD pair as a whole continued its upward movement on Friday. In total, the pair crossed 44 points from the low to the high of the day. And this was on the day when both the European Union and the United States had a lot of important macroeconomic reports. However, let's talk about them below. So far, it should be noted that the volatility of the euro/dollar pair remains extremely low. Unfortunately, there is nothing you can do about it. It is quite difficult to trade with such volatility. For example, two trading signals were generated on the 30-minute timeframe on Friday. At first, the MACD indicator turned up, but this reversal coincided with the release of a strong report in the US. And then the price bounced off the 1.1908 level. The second signal could theoretically be worked out, but it was also formed approximately at the time when the Nonfarm report was released, and it was possible to earn 10 points maximum on it. At the same time, the upward trend persists and continues to be supported by the upward channel. If the pair settles below it, it will mean a change in the trend. 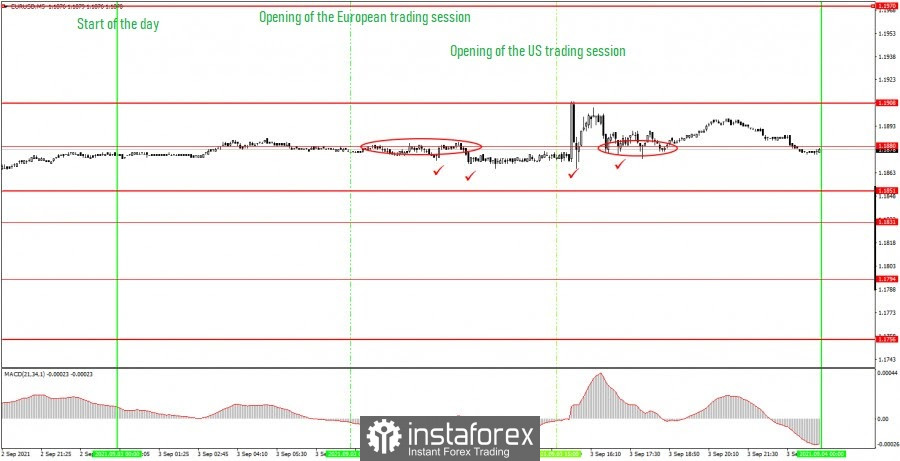 You can clearly see on the 5-minute timeframe that not only did the pair stand in one place for most of the day, but also traded mostly sideways. Even in spite of at least four important reports that could and should have influenced the pair's movement. It all started with the release of the business activity report in the EU. And literally through the retail sales report in the European Union. It doesn't even make sense to consider the actual values of these reports and compare them with the predicted ones, since there was no reaction (the first two ticks in the chart). Next, the most important macroeconomic report for the past few weeks was published - NonFarm Payrolls in the United States (third tick), on which the Federal Reserve's monetary policy will depend in the coming months. And the market reaction to the report with the value that was three times worse than the forecast was 38 points. Moreover, despite the blatant weakness of the report, the quotes rushed back down within 5 minutes after taking off. As a result, the day ended at the same level as it began. The ISM manufacturing index no longer worried anyone at all (fourth tick). Formally, two signals were formed during the day, which could theoretically be worked out. But the first signal stretched out in time for several hours. That is, there was no question of any accuracy and clarity. The second signal was formed immediately after the release of important statistics in the United States and should not have been worked out. Moreover, it was also completely fuzzy. As a result, novice traders should not have entered the market on Friday.

The EUR/USD pair continues to be in an upward trend on the 30-minute timeframe, but at the same time a very weak trend. We still do not recommend tracking buy signals from the MACD indicator and waiting for a more convincing trend line or channel and the start of a stronger movement. On the 5-minute timeframe, it is recommended to trade from the levels 1.1831, 1.1851, 1.1880, 1.1908. Take Profit, as before, is set at a distance of 30-40 points. Stop Loss - to breakeven when the price passes in the right direction by 15 points. At the 5M TF, the target can be the nearest level if it is not too close or too far away. If located - then you should act according to the situation. No major publications or other events are scheduled for Monday, neither in the United States nor in the European Union. However, it doesn't matter for the euro/dollar pair at all now, since the volatility remains very low anyway.

MACD indicator (14,22,3) - a histogram and a signal line, the crossing of which is a signal to enter the market. It is recommended to use in combination with trend plots (channels, trend lines).

Interesting? Write a comment below.
 How to trade the EUR/USD currency pair on September 6? Simple tips for beginners
Forward 
Backward 