How to trade the EUR/USD currency pair on September 30? Simple tips for beginners 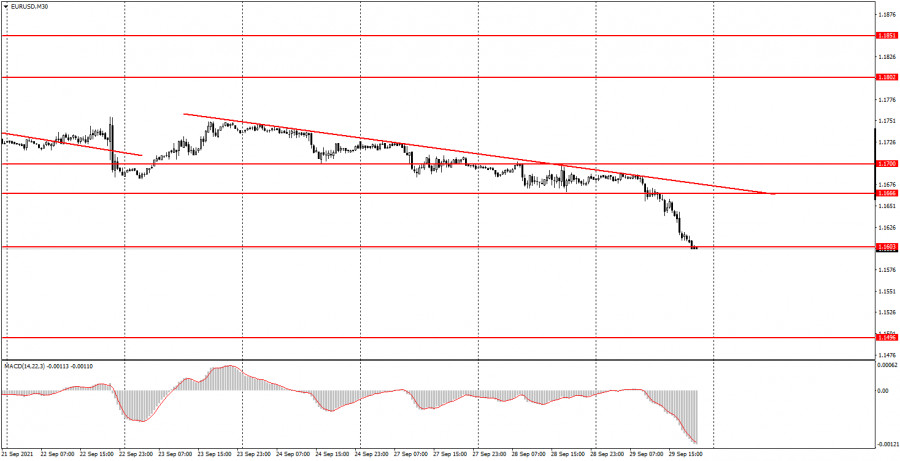 The EUR/USD pair sharply and unexpectedly fell on Wednesday. One gets the feeling that the euro has looked at yesterday's pound and decided to repeat it. One way or another, but today the pair overcame the distance close to 80 points and ended up near the level of 1.1603 at the end of the day. We also formed a downward trend line, which should be entered into textbooks as an example of inaccurate lines. This line has no clear point of support. The price has simply been moving along it over the past few days, not moving away more than 30 points. As for the macroeconomic statistics, it was not available today. But literally a couple of hours ago, the speeches of Christine Lagarde and Jerome Powell took place, who speak almost every day this week. However, by the time their speeches began, the euro/dollar pair had already gone down almost all its way. Thus, there is no reaction to the speeches of the heads of the European Central Bank and the Federal Reserve now. 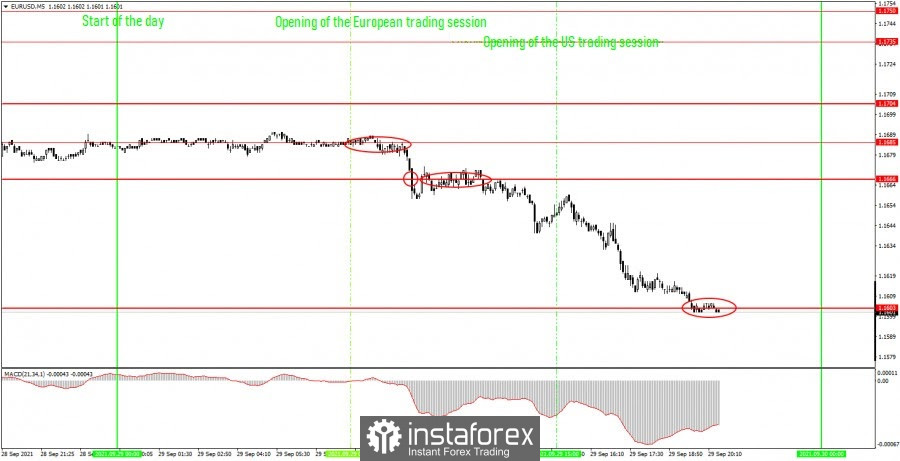 The technical picture on the 5-minute timeframe on Wednesday was almost perfect. First, there is a good trend movement. Secondly, there is high volatility. What else do traders need? Only four trading signals were generated during the day. The first one - for short positions - was not clear and strong, but nevertheless deserved to be worked out. The price bounced off the 1.1685 level and started a rather strong downward movement. This was followed by a breakthrough of the 1.1666 level (the second signal to sell, and a strong one). Immediately after that, traders tried to return the pair above this level, but could not confidently settle above it. Thus, a third sell signal was formed - a rebound from the level of 1.1666, after which the downward movement continued right up to the level of 1.1603. The last trading signal was formed late in the evening and should have been used to close short positions opened at the very beginning of the day. In this case, novice traders could earn about 65 points. If they worked according to Take Profit, then the profit should have been 30-40 points. In any case, the traffic was very good today.

How to trade on Thursday:

The EUR/USD pair formed a new downward trend and even started to move on the 30-minute timeframe. Unlike the pound, the fall in the European currency is very difficult to explain from a fundamental point of view. However, there are chances that the pair will now move 60-80 points every day, rather than 40 as in the past few months. Therefore, in the near future it will be possible to consider signals from the MACD indicator. The key levels on the 5-minute timeframe for September 30 are 1.1496, 1.1603, 1.1666. Take Profit, as before, is set at a distance of 30-40 points. Stop Loss - to breakeven when the price passes in the right direction by 15 points. At the 5M TF, the target can be the nearest level if it is not too close or too far away. If it is, then you should act according to the situation or work according to Take Profit. On Thursday, novice traders may pay attention to the speeches of Jerome Powell and Janet Yellen, but the markets may not react to these events again. No macroeconomic reports planned in the US or the European Union for tomorrow.

MACD indicator (14,22,3) - a histogram and a signal line, the crossing of which is a signal to enter the market. It is recommended to use in combination with trend plots (channels, trend lines).

Interesting? Write a comment below.
 How to trade the EUR/USD currency pair on September 30? Simple tips for beginners
Forward 
Backward 