How to trade the EUR/USD currency pair on September 10? Simple tips for beginners 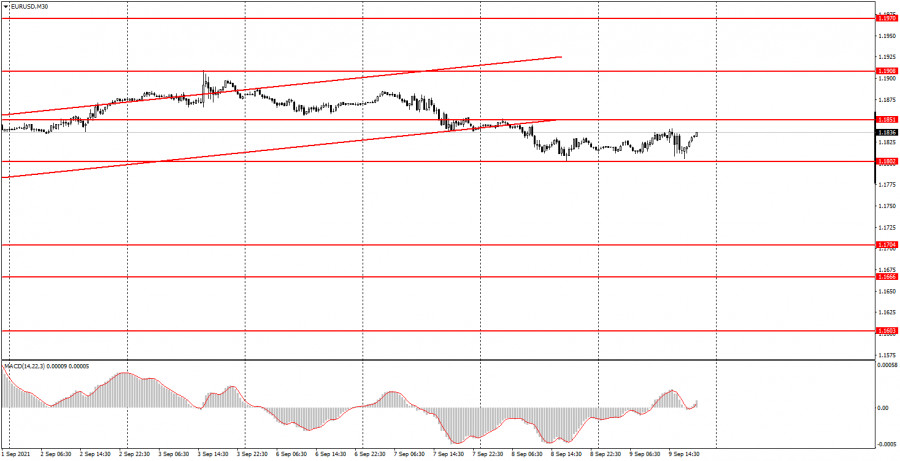 The EUR/USD pair continued to trade in absolute flat on Thursday. Despite the fact that lately the pair has nevertheless shown a trend movement from time to time, the last two days have passed in an absolute flat between the levels of 1.1802 and 1.1851. Thus, by and large, there is nothing to analyze, because the technical picture has not changed at all over the past day. Today, no trading signals were generated on the 30-minute timeframe, and we recommend ignoring signals from the MACD indicator at this time. In fact, it is very strange that today the pair showed absolutely nothing in terms of movement. Still, the European Central Bank meeting and Christine Lagarde's press conference are very important events. In addition, Lagarde made some interesting statements. However, the markets did not find anything extraordinary in them, so the volatility of the day was again less than 40 points. Traders were not interested in either the increase in the forecast for GDP for 2021, or the announcement of a reduction in the pace of asset purchases under the PEPP program. 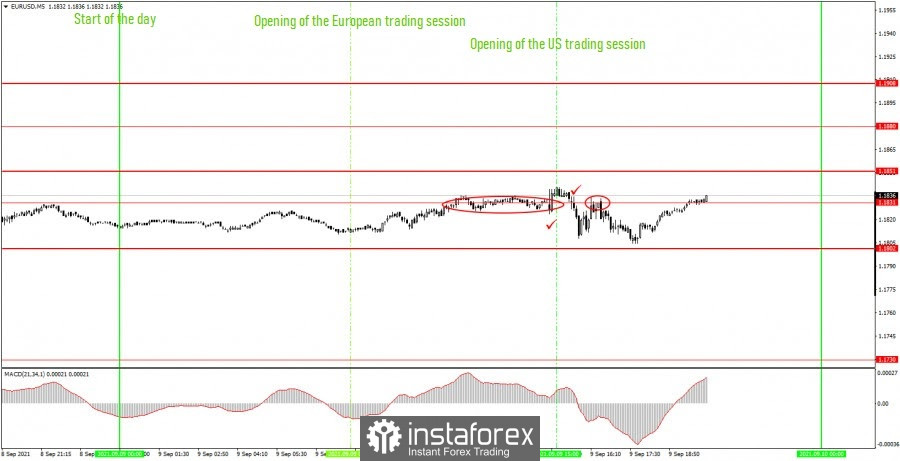 The movements during the day were even worse on the 5 minute timeframe. The pair stood in one place throughout the European trading session, and when it reached the level of 1.3831, it began to move simply along it. Thus, a signal was not generated near this level, which deserves to be worked out. Then, at first, the results of the ECB meeting took place (first tick), and then Lagarde's press conference (second tick). Therefore, it was not necessary to trade at this time, since the reaction of the markets could be absolutely anything. The only signal that could formally be worked out was a sell signal in the form of a rebound from the level of 1.1831. However, in any case, it did not work to earn money. After the signal was generated, the price went down 15 points, which was enough to set Stop Loss to breakeven. But the price did not reach the level of 1.1802 to close the deal, so the short position "flew out" at the Stop Loss at zero.

How to trade on Friday:

The pair left the rising channel on the 30-minute timeframe, forming a downward trend. However, the movements are still very weak, so we still do not recommend considering the MACD indicator as a source of trading signals. In addition, traders failed to settle below the level of 1.1802, so further prospects for a downward movement are also far from obvious. On the 5-minute timeframe, it is recommended to trade from the levels 1.1730, 1.1802, 1.1831, 1.1851, 1.1880. Take Profit, as before, is set at a distance of 30-40 points. Stop Loss - to breakeven when the price passes in the right direction by 15 points. At the 5M TF, the target can be the nearest level if it is not too close or too far away. If located - then you should act according to the situation. Another speech by Christine Lagarde, ECB President, is scheduled for Friday in the European Union. It is not recommended to skip this event, of course, but the likelihood that Lagarde will announce something new compared to Thursday is small. Nothing interesting planned in America. Therefore, there is a high probability that we will have another "mind-blowing" day with a volatility of 40 points.

Interesting? Write a comment below.
 How to trade the EUR/USD currency pair on September 10? Simple tips for beginners
Forward 
Backward 