How to trade the EUR/USD pair on September 20? Simple tips for beginners 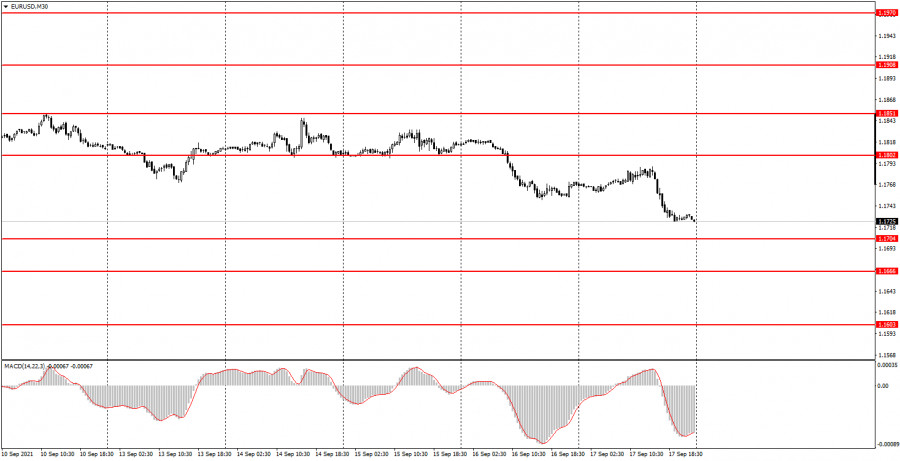 The EUR/USD pair continued its downward movement on Friday, which began a day earlier. Thus, at this time, we can even talk about the formation of a downward trend, but there is no trend line or downward trend channel. Therefore, for now, we would not draw such conclusions. At this time, much depends on the Federal Reserve meeting and its results, which will be announced on Wednesday. Markets can already trade "with an eye" on this event. This means that the dollar's current growth can easily be replaced by a fall on Wednesday or even earlier. Since there is no clear trend at this time, we still do not recommend considering signals from the MACD indicator. Let us remind you that if you do not take the last two trading days into account, the volatility in the EUR/USD pair remains very weak. As we said, Friday's macroeconomic statistics did not cause any reaction from the markets. The consumer price index in the European Union in the second assessment in August amounted to the same 3.0% as in the first. And the consumer sentiment index from the University of Michigan was 71.0 points against the forecast of 71.9. As you can see, the discrepancy is small. And in any case, in the last two days, the pair mostly fell, not paying too much attention to the statistics. 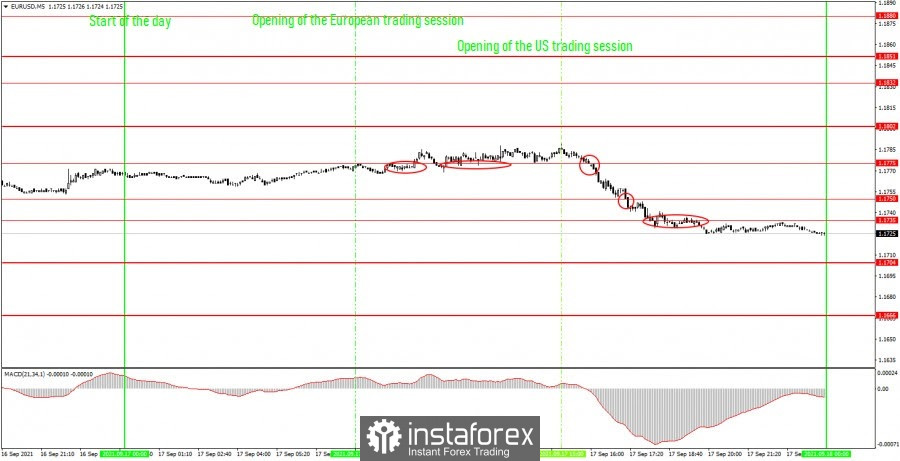 On the 5-minute timeframe, the technical picture on Friday was pretty good. Unfortunately, the quotes practically stood in one place in the first half of the day, there was practically no movement. But in the second half of the day, the pair showed a rather strong downward movement. Nevertheless, five trading signals were formed during the day, which should be analyzed. The first two buy signals were very fuzzy and could be completely ignored. When a signal takes a couple of hours to form, this is unlikely to indicate its strength. Nevertheless, we will consider the option in which all signals that should have been processed are processed. Thus, after these two buy signals, novice traders could enter long positions. Were these signals false? They should have been manually closed when the price settled below the 1.1775 level. Short positions should have been opened in the same place, which brought the main profit, since the price subsequently crossed the next two levels of 1.1750 (the previous day's low) and 1.1735. Thus, a profit of about 40 points could be made on a short position. And a loss of 14 points on a long position. The total profit is 26 points.

The EUR/USD pair has been moving for a long time without any trend on the 30-minute timeframe. The movements are still not strong, but in recent days, the pair began to show signs of life. However, we still do not recommend considering the MACD indicator as a source of trading signals. On the 5-minute timeframe, it is recommended to trade from the levels 1.1666, 1.1704, 1.1735, 1.1750, 1.1775, 1.1802. Take Profit, as before, is set at a distance of 30-40 points. Stop Loss - to breakeven when the price passes in the right direction by 15 points. At the 5M TF, the target can be the nearest level if it is not too close or too far away. If located - then you should act according to the situation. Neither the European Union nor the United States is scheduled for any important macroeconomic publications or fundamental events on Monday. However, we remind you that the results of the Fed meeting will be summed up on Wednesday, so the markets can trade the pair, looking specifically at the US central bank meeting.

We also recommend that you familiarize yourself with the GBP/USD review.

Interesting? Write a comment below.
 How to trade the EUR/USD pair on September 20? Simple tips for beginners
Forward 
Backward 