How to trade the EUR/USD pair on September 21? Simple tips for beginners 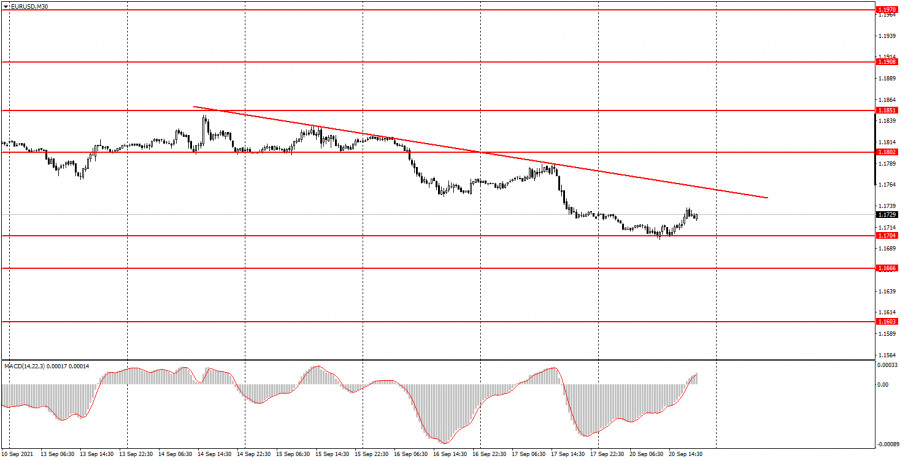 The EUR/USD pair failed to overcome the level of 1.1704 on Monday and began a round of upward correction. Since the downward trend line was built, the trend is currently downward. Therefore, you can try to consider sell signals from the MACD indicator in the coming days. Although on Monday, after two rather good days in terms of volatility, this indicator seriously decreased again and was less than 40 points. We are already accustomed to such volatility values in recent months. Since there were no macroeconomic reports on Monday, it is not surprising, in principle, that the pair was practically immobilized. So, tomorrow quotes may bounce off the trend line, which will also be a sell signal that can be used. In general, I would like to note that the markets have already fully focused on the Federal Reserve meeting, the results of which will be announced on Wednesday. Therefore, the movements may become much more active tomorrow. Recently, the dollar has been strengthening, but no one can predict what will happen on Wednesday and in the next few days. 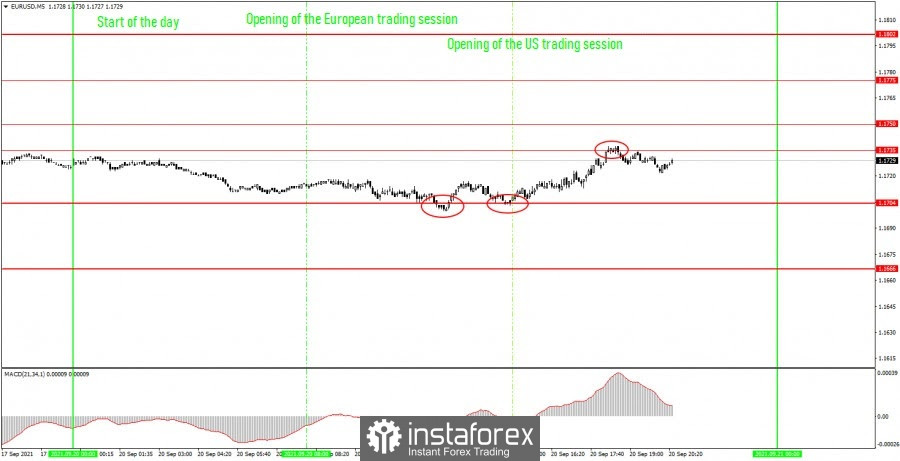 The technical picture on the 5-minute timeframe was also very boring on Monday. However, despite the low volatility during the day, the pair still formed several signals, moreover, quite strong ones. The first buy signal was formed approximately in the middle of the European trading session. It was a rebound from the 1.1704 level. A couple of hours later, it was duplicated, as the price dropped to this level again and bounced off it. Thus, novice traders had an excellent opportunity to enter long positions today. The price subsequently reached the nearest target level of 1.1735 and bounced off it. Therefore, in this place, it was necessary to take profit on open transactions. This trade brought in a profit of 17 points for the newbies. Considering that the pair passed less than 40 points in a day, this is an excellent result. You could even try to work out the last sell signal in the form of a rebound from the level of 1.1735. It was also possible to earn about 5 points on it.

How to trade on Tuesday:

The EUR/USD pair formed a downward trend on the 30-minute timeframe. Therefore, tomorrow during the day, you can try to consider short positions based on signals from the MACD indicator. Recall that MACD should ideally form a signal near the zero level. On the 5-minute timeframe, it is recommended to trade from the levels 1.1666, 1.1704, 1.1735, 1.1750, 1.1775. Take Profit, as before, is set at a distance of 30-40 points. Stop Loss to breakeven when the price passes in the right direction by 15 points. At the 5M TF, the target can be the nearest level if it is not too close or too far away. If located - then you should act according to the situation. No important macroeconomic publications or fundamental events scheduled in the European Union nor in the United States on Tuesday. However, we remind you that the results of the Fed meeting will be summed up on Wednesday, so the markets can trade the pair, keeping in mind exactly the Fed meeting and its possible results.

Interesting? Write a comment below.
 How to trade the EUR/USD pair on September 21? Simple tips for beginners
Forward 
Backward 