How to trade the GBP/USD currency pair on September 6? Simple tips for beginners. 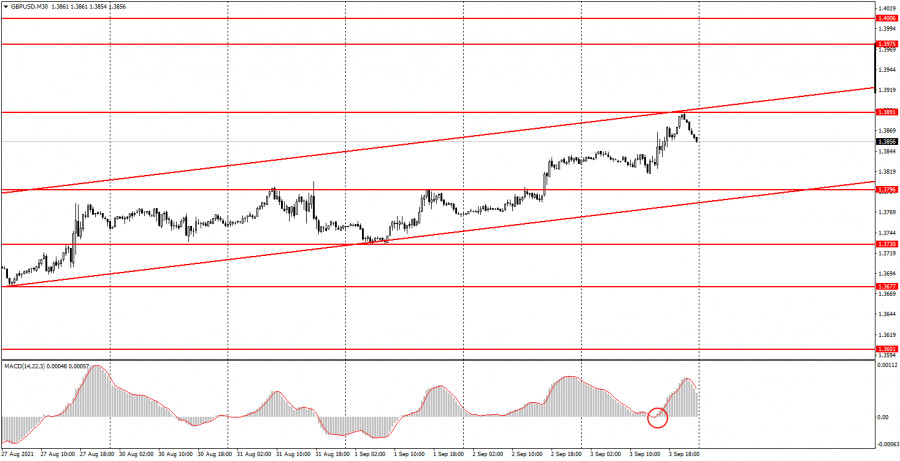 The GBP/USD pair was in an upward movement for most of the day on the 30-minute timeframe on Friday, which was provoked by weak statistics from the US. Unlike the euro/dollar pair, the pound/dollar pair reacted more or less adequately to several important macroeconomic reports. Although, by and large, the reaction only followed the NonFarm Payrolls report, which turned out to be three times weaker than the forecast values. Consequently, it could not help but provoke a weakening of the US currency = growth of the pound/dollar pair). As a result, after the NonFarm Payrolls report was released, the dollar quotes fell by 70 points, which is also not very much for this pair. Let us remind novice traders that 60-80 points per day are considered normal volatility for the EUR/USD pair. For the pound/dollar pair - 100-120 points. But in recent months, these values have dropped by at least one and a half times, which greatly complicates the trading process. On Friday, the MACD indicator generated one buy signal (circled in the chart). However, it was formed exactly at the time when the Nonfarm report was published, so it should have been ignored, since it was completely unknown how the pair would behave some time after the report. 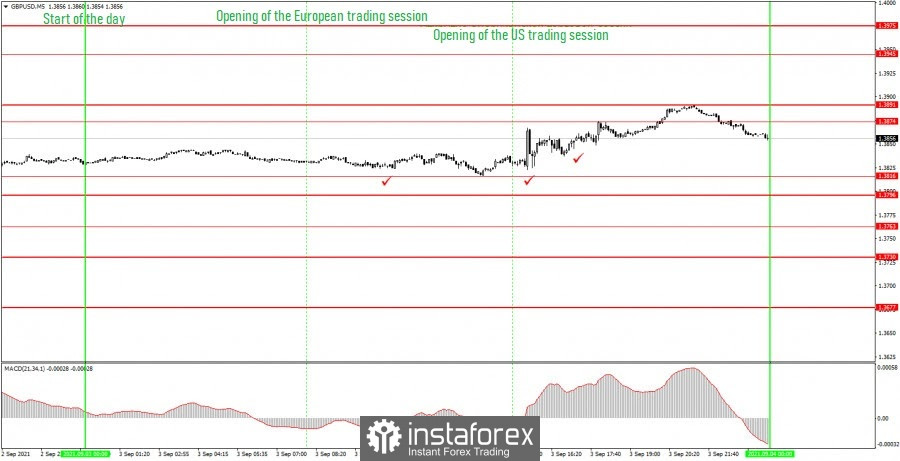 It was also very difficult to move on the 5-minute timeframe on Friday. The first half of the day (European trading session) passed in a sideways range 25 points wide. In the second half of the day (at the US trading session), several important reports were published at once, which provoked an upward movement. Obviously, at the time of their publication, new deals should not have been opened. However, it should also be noted that the market reaction was only to the NonFarm Payrolls report, and the reports on unemployment, wages and business activity in the ISM services sector were ignored. This becomes clear when we look at the actual values of these reports or when they were released. For example, the ISM report (the third checkmark in the chart) just didn't get any reaction. And the reports on wages and unemployment turned out to be better than forecasts, therefore, they should have provoked a strengthening of the US dollar (that is, a fall in the pound/dollar pair). As a result, on Friday, novice traders should not have opened trade deals for the pound/dollar pair either. There were no sensible signals, and there were a lot of macroeconomic statistics, which increased the risk of receiving losses during the day due to false signals or due to sharp price reversals.

At this time, the pound/dollar pair is in an upward channel on the 30-minute timeframe, so we advise beginners to look closely at buy signals from the MACD indicator. At this time, the indicator is too high, you need to wait until it drops to the zero level. You can also use a price rebound from the lower border of the channel as a buy signal. The important levels on the 5-minute timeframe are 1.3796, 1.3816, 1.3874, 1.3891. We recommend trading with them. The price can bounce off them or overcome them. As before, we set Take Profit at a distance of 40-50 points. At the 5M TF, you can use all the nearest levels as targets, but then you need to take profit, taking into account the strength of the movement. When passing 20 points in the right direction, we recommend setting Stop Loss to breakeven. On Monday, the UK is scheduled to publish the PMI for the construction sector. Perhaps this report will even provoke a 15-20 point market reaction. Nothing interesting is planned for tomorrow in America.

MACD indicator is a histogram and a signal line, the crossing of which is a signal to enter the market. It is recommended to use in combination with trend plots (channels, trend lines).

Interesting? Write a comment below.
 How to trade the GBP/USD currency pair on September 6? Simple tips for beginners.
Forward 
Backward 