How to trade the GBP/USD pair on September 20? Simple tips for beginners 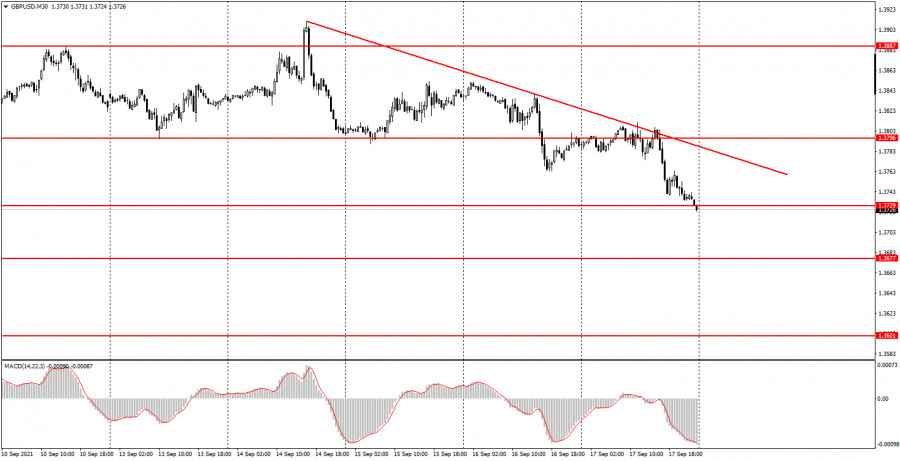 The GBP/USD pair was trading lower on the 30-minute timeframe on Friday, as well as on Thursday. In general, the downward movement for the pound began four days ago. Therefore, it became possible to form a downward trend line, which now supports the bears. Admittedly, volatility has also increased, so trading the pair as a whole has become much more pleasant. On Friday, it was even possible to reject sell signals from the MACD indicator. Several of them were even formed. In particular, two rebounds from the trend line, as well as two downward reversals of the MACD indicator. But since there was no trend line yet in our last article on the pound, we will not consider these signals. On Friday, the fall in the British currency at first glance was completely justified, because the morning report on retail sales for August was weaker than forecasted. However, we draw the attention of novice traders that the pair's fall began much later than the publication of the retail sales report. Thus, this report has nothing to do with the pair's movement on Friday. The same can be said for the University of Michigan Consumer Sentiment Index. However, it simply had no effect on the markets. 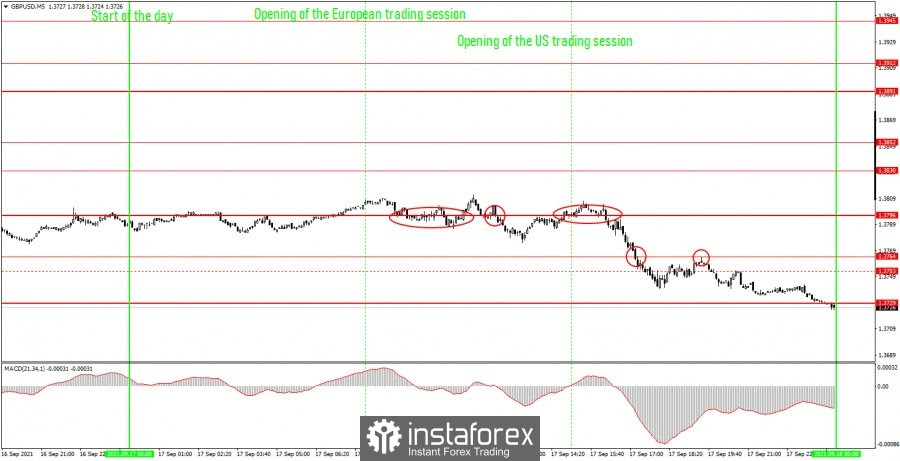 The GBP/USD pair's movement on the 5-minute timeframe last Friday was about the same as on the EUR/USD pair. The movement was mainly sideways during the European trading session, while it was downward during the US session. However, the pound had a more volatile flat than the euro during the European trading session, which resulted in forming false signals. In general, all signals from the European trading session turned out to be false. And there were two of them. The first one is to buy - consolidating above the level of 1.3796. The second one is to sell - consolidating below the same level. Unfortunately, these two trades resulted in a loss of 30 points. And the last sell signal near the level of 1.3796, which was formed already in the US session, should not have been worked out, since before that two false signals had already formed around this level. Therefore, just a profitable signal was missed. However, it should also be noted that the first and third signals were very weak and indistinct, since their formation took at least an hour. For example, the fourth and fifth signals formed in 5 minutes and were strong. In principle, you can clearly see how well they are worked out. Therefore, the first and third signals could not be worked out. On the fourth signal, beginners could open short positions, which by the end of the day brought 20-25 points of profit. Therefore, most of the possible losses on the first two trades were covered. Still, it was not a good day to trade.

At this time, the pound/dollar pair has formed a downward trend with a downtrend line on the 30-minute timeframe. However, we remind you that the current downward movement (that is, the strengthening of the dollar) may be an "advance" for the future Federal Reserve meeting, from which the markets are expecting a reduction in the QE program. Thus, it is possible that the trend will be short-lived. However, sell signals from the MACD indicator can still be considered. The important levels on the 5-minute timeframe are 1.3677, 1.3729, 1.3764, 1.3796, 1.3830. We recommend trading with them. The price can bounce off them or overcome them. As before, we set Take Profit at a distance of 40-50 points. At the 5M TF, you can use all the nearest levels as targets, but then you need to take profit, taking into account the strength of the movement. When passing 20 points in the right direction, we recommend setting Stop Loss to breakeven. No major events scheduled in either the US or the UK for Monday. Therefore, you will have to trade on pure technique and expectations regarding the Fed meeting.

We also recommend that you familiarize yourself with the EUR/USD review.

Interesting? Write a comment below.
 How to trade the GBP/USD pair on September 20? Simple tips for beginners
Forward 
Backward 