JPMorgan's strategists concluded that Ethereum should cost $ 1,500. Based on the statement, the fair value of this cryptocurrency is much lower than its current price. According to the company, and to their set of measurements based on network activity, the cost of ETH at $1,500 is quite fair, and the remaining 55% of the market price is nothing more than speculation and an inflated bubble. One of the reasons for this assessment is that Ethereum is no longer so unique and faces fierce competition from other networks, such as Solana and Avalanche.

The managing director of JPMorgan said that Ether (ETH), the Ethereum network's own token, is trading at the current price only due to the market's confidence in the further development of the project. If one looks at the hash rate and the number of unique addresses, it can be seen that the real cost is much lower.

"We are struggling to get above $ 1,500, but the current price reflects an exponential growth in usage and traffic that may never materialize," JPMorgan noted.

This conclusion was already made by the "citizens" not only from JPMorgan. This idea is not new and does not have such a serious relevance. The fact that Ethereum is no longer so unique only means that it will continue to be in demand since nothing better has yet been invented. It is still quite early to talk about the maturity of projects such as Avalanche and Solana, which were almost hacked recently, paralyzing the work of the blockchain for more than two hours. There is simply no real alternative to ETH, on which most of the DeFi and NFT are currently being produced. Ethereum was a pioneer in the development and implementation of smart contracts in the cryptocurrency market and remains so. It gave rise to many chains, called "Ethereum killers", who seek to get the share of the Ethereum market, is not a serious threat, but only proves the viability of the market and its maturity.

However, it would be crazy to exclude the fact of competition from Binance or competition from Solana. In any case, all these projects have a good future, so it is recommended to take a closer look at them. But as long as the power of the ether blockchain will surpass all these networks, there is not much to worry about. Even with some large venture investments in these individual projects, most of the innovation still occurs in Ethereum, and then spreads to other projects. We are talking about a network of decentralized financing (DeFi) and non-interchangeable tokens (NFT). All of them initially appeared in Ethereum, and then were transferred to other networks.

From the point of view of technical analysis, the observed decline in ETH may be delayed if the bears manage to break through the large support of $3050 and consolidate below this level. In this case, a fall to the area of $2,700 and even to $2,440 will not be as unrealistic as it seemed quite recently. A serious correction in the US stock market is once again reflected in the cryptocurrency market, which has a fairly strong correlation with it. Apparently, investors still prefer to pay attention to the capital market than to new digital money. It will be possible to talk about the stabilization of the situation only after the Ether returns to the level of $ 3,300 or the bulls will be able to protect the large support of $ 3,046. 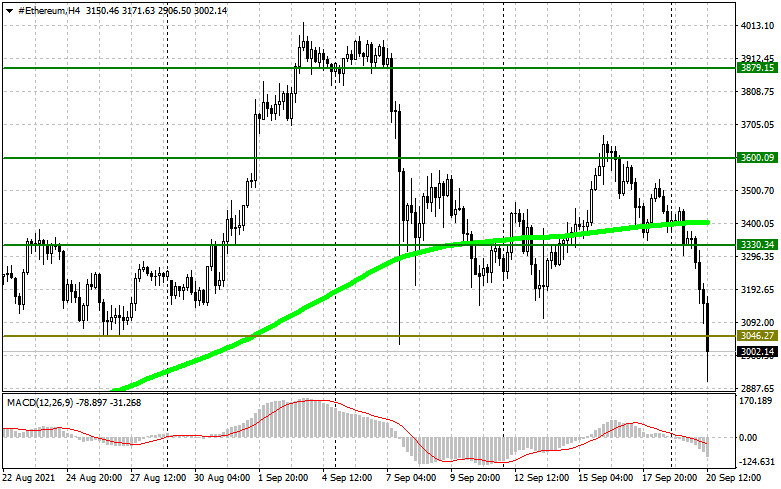 Interesting? Write a comment below.
 500, JPMorgan: Ethereum should be worth $ 1
Forward 
Backward 