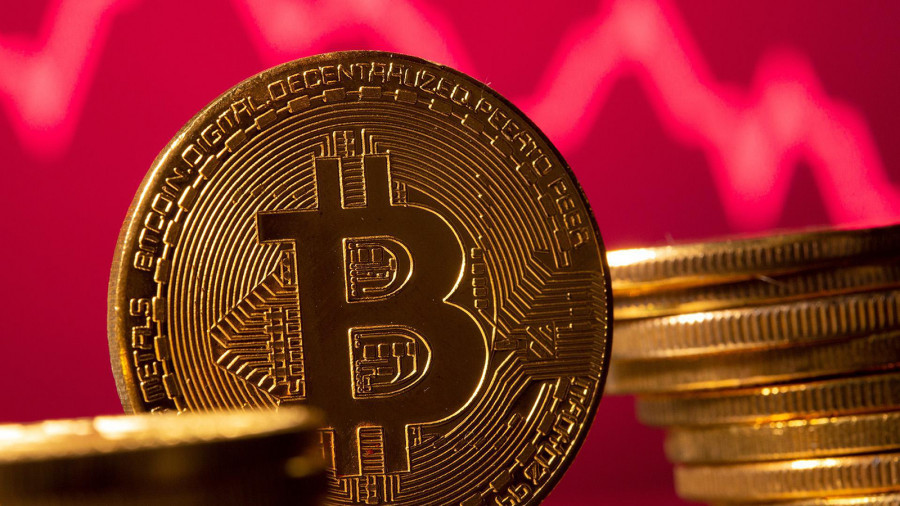 Bitcoin continues to try its best to stay above the level of $ 43,852. Yesterday, its quotes tested two levels at once – $ 46,600 and $ 43,852 for several hours. A rebound followed from both, so the cryptocurrency remained between them in a kind of side channel. So, despite quite high volatility on Monday, Bitcoin's technical picture has not changed. It is still believed that a correction is the most likely scenario at the moment. We continue to draw traders' attention to the fact that there is currently no support for cryptocurrency. In this case, we are waiting for it to consolidate below the level of $ 43 852 and further decline.

Meanwhile, the most famous public company holding bitcoin has announced that it has invested another $ 240 million in cryptocurrency. We are talking about MicroStrategy, which was once famous for developing analytical software. However, the name "Microstrategy" is now associated with constant and large purchases of the main cryptocurrency. This time, the company purchased another 50 coins, bringing the total amount on its balance to 114,000.

Also yesterday, it also became known that the largest retailer in the United States, Walmart, did not conclude any agreement with Litecoin. This happened a few hours after the opposite message appeared, which turned out to be untrue. The Litecoin cryptocurrency surged by $ 63 in these few hours, and then down the same amount. It is worth noting that $ 63 is about a quarter of its cost for a couple of hours. However, this message also had a little impact on bitcoin.

On another note, there was a message from El Salvador, which recently completely legalized all transactions with bitcoin for local residents and recognized cryptocurrency as a legal means of payment. This time, it became known that foreign investors will be exempt from paying taxes on any transactions with bitcoin. Thus, the government of the poorest country continues to look for ways out of the economic abyss through cryptocurrencies and their introduction into its own financial system.

Bitcoin broke its record for the amount of electricity spent on mining yesterday. The value exceeded 67 terawatts/hour, and it may reach 91 terawatts/hour by the end of 2021. Experts have already reported that the whole countries consume about the same. Therefore, Bitcoin and other cryptocurrencies continue to negatively affect the ecology of planet Earth, and humanity continues to face the problem of combating climate change. Over the past few days, several large bitcoin traders have purchased 50,000 coins. This gives grounds to conclude that large investors do not sell their coins, which means they do not believe that the current bullish trend is over. However, everything will depend not only on them but also on retail investors and miners.

In general, the fundamental background now remains quite neutral. There is no news that could definitely be written down as positive or negative. It can be recalled that new legislation continues to be prepared in the States, which will greatly complicate the life of investors and traders since most cryptocurrency transactions will go through the US Tax Administration. 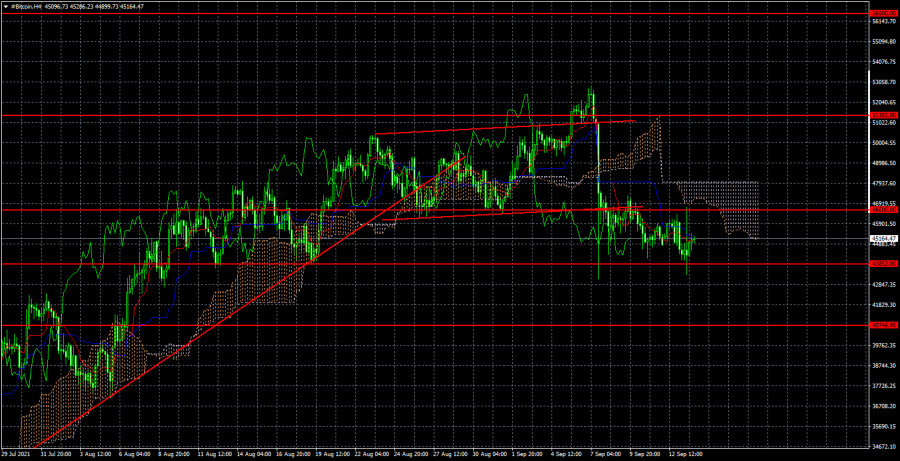 On the four-hour time frame, there is a clear downward trend. Bitcoin's quotes went below the Ichimoku cloud, the critical line, the ascending channel, and the level of $ 46,600. The collapse of quotes on September 7 may be the beginning of a new prolonged decline. Therefore, we expect the rate to consolidate below the level of $ 43,852 and decline to $ 40,746 in the next few days. But if buyers manage to hold Bitcoin above the level of $ 46,600, the upward trend may continue.