Overview of the EUR/USD pair on September 3. 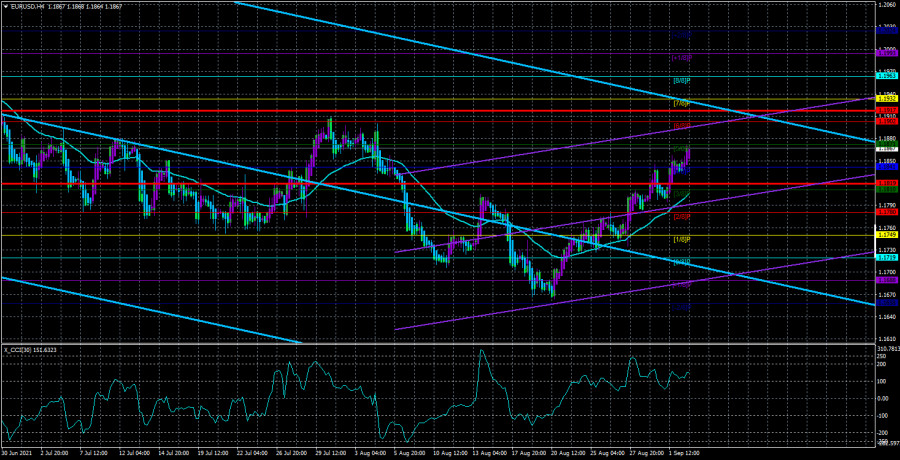 The EUR/USD currency pair was trading very calmly again. It is even better to say "in the usual mode for yourself." Since the last couple of days have been quite active by current standards, it was not surprising that on a day when the calendar of macroeconomic events was empty, the markets again took a wait-and-see position. And there is something to wait for at this time. The Nonfarm Payrolls report in the US will be published today, which will show how many new jobs were created outside the agricultural sector in August. Recall that at this time, it is the Nonfarm report that is the most important for the markets and the Fed. Therefore, it is expected from the very beginning of the week. We also recall that the euro/dollar pair has been spending three out of every five trading days in a frank flat recently. Therefore, Thursday from the very beginning promised to be an extremely boring day. In technical terms, the pair's quotes remained above the moving average line, and the lower channel of the linear regression is slowly turning upwards. Thus, now we can speak with more confidence about the beginning of a new upward trend. In general, the fundamental and technical picture did not change at all yesterday. We still expect a systematic increase in the quotes of the European currency, which is based on large monetary injections of the Fed into the American economy. We also recall that all technical factors on all timeframes now favor continuing the movement to the north.

It so happened that in recent weeks and even months, the markets have mainly been discussing the Fed's monetary policy and quantitative stimulus programs. However, everyone has already forgotten about the ECB. In principle, the European regulator itself is to blame for this. Like his other representatives, Christine Lagarde did not give any signals that monetary policy may be tightened in the near future (or at least not in the near future). On the contrary, Lagarde has repeatedly stated that the European economy is now in a sick state with both broken legs and without two crutches (monetary and fiscal stimulus). Thus, no one has recently introduced any talk about the possible end of incentives in the European Union. Recall that the $ 1.85 trillion PEPP program is designed to operate until the end of March 2022. The European economy has been recovering recently.

Let's look at the GDP figures of the European Union. After a collapse of 11.5% in the second quarter of last year, the third quarter was followed by +12.4%, then two "negative" quarters -0.6% and -0.3%, and only in the second quarter of this year an increase of 2% was recorded. Thus, the European economy has been shrinking more often than growing over the past year and a half. Therefore, it is unclear what the talks about the possible curtailment of the PEPP program in the European Union that appeared just a few days ago are based on. The heads made statements about the need to reduce the QE program of the central banks of France, Austria, and the Netherlands. Those countries have relatively few financial problems, and during the pandemic, they suffered much less than the "south." However, the European Union is not a three country. These are 27 countries. Therefore, it is unlikely that the ECB will follow the lead of three countries out of 27. There is not even Germany, which is considered the locomotive of the entire European economy.

Moreover, it is necessary to focus on this issue exclusively on Christine Lagarde. And the ECB president has not spoken for several weeks and has not given any comments at all. Thus, before we expect a tightening of monetary policy in the European Union, we should at least find out Lagarde's opinion on this issue. When Lagarde at least begins to hint at a possible early termination of the PEPP program, there is no point even talking about it. The American economy is much more ready for tightening. However, Jerome Powell and the company doubt the feasibility of this step in 2021 and do not want to rush to make such an important decision. Especially now, when the number of diseases with the "coronavirus" and its new strains has been growing in the United States for several weeks in a row, as well as when the cold season has come, which is traditionally marked by an increase in diseases among the population of most countries of the world. 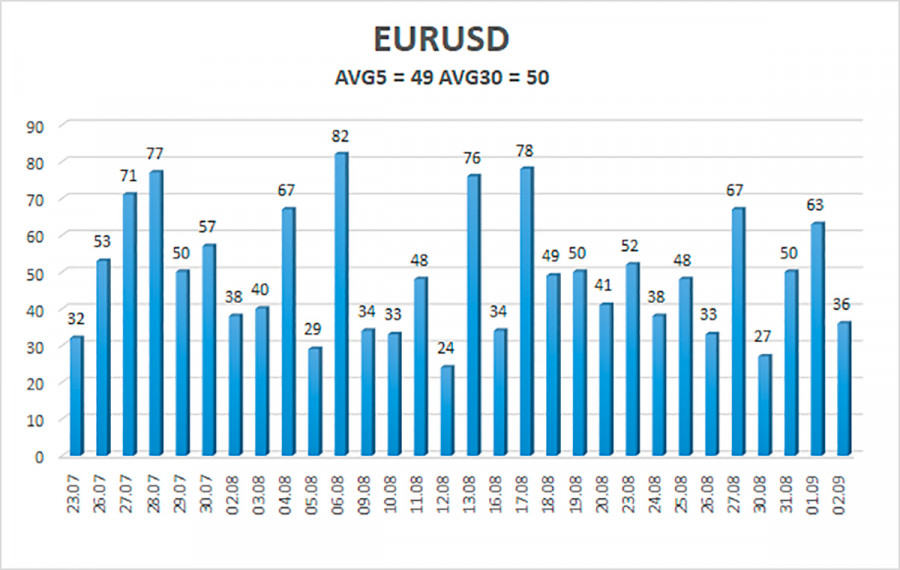 The volatility of the euro/dollar currency pair as of September 3 is 49 points and is characterized as "low." Thus, we expect the pair to move today between the levels of 1.1819 and 1.1917. A reversal of the Heiken Ashi indicator downwards will signal a new round of corrective movement.

The EUR/USD pair continues its weak upward movement. Thus, today, you should stay in long positions with the targets of 1.1902 and 1.1917 until the Heiken Ashi indicator turns down. Sales of the pair will be possible if the pair is fixed back below the moving average line with targets of 1.1780 and 1.1749, and they should be kept open until the Heiken Ashi indicator turns up.