Overview of the EUR/USD pair. September 10. The ECB meeting 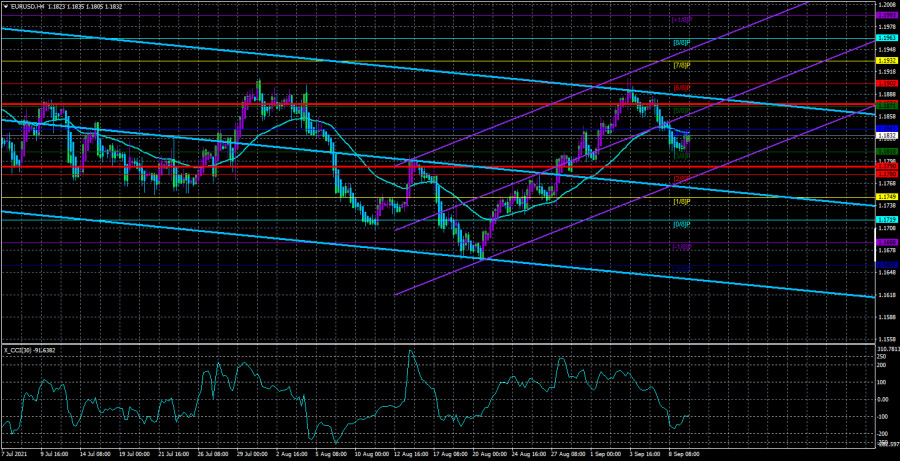 The EUR/USD currency pair could have shown good movements on Thursday. However, it did not happen. If on days when the macroeconomic and fundamental backgrounds are zero, there is still some justification for the minimal volatility of the euro/dollar pair. Yesterday, there were all the necessary grounds for the pair to show higher activity than the next 40 points. The ECB meeting is always one of the most important events for the foreign exchange market, so traders always count on strong movements. Even if no important decisions are taken during it, and the head of the ECB does not make any loud statements. However, yesterday again showed that traders of the euro/dollar pair do not want to trade it, so the pair is practically immobilized. What is most interesting is that the pair does not stand in one place. It is moving, and this movement can even be called a trend. However, the movements are so weak that it may take 2-3 weeks to overcome 200 points. In general, traders were waiting for Thursday. However, they waited for it in vain since there were no movements on that day, and the technical picture did not change. Based on this, we cannot draw any new conclusions. The pair is still located below the moving average line. Everything also keeps excellent chances for a new upward trend. Still, most of the fundamental factors speak in favor of a further fall in the US currency. But there is no movement itself.

Now let's look at the results of the meeting itself. The ECB quite predictably left the current parameters of monetary policy unchanged. Few people expected that the ECB would raise key rates or change the volume or timing of the PEPP program. Thus, the regulator's decision not to change the main policy parameters was not something unexpected. Nevertheless, the monetary policy report said that the pace of buying securities from the open market might decrease in the third and fourth quarters. The European regulator believes that the current financial conditions are favorable, so the pace of the PEPP program can be reduced. At the same time, the ECB understands the danger of the coronavirus pandemic, which has recently been gaining momentum again, and believes that it can cause serious damage to the current economic recovery. However, the ECB also raised its GDP forecast for 2021 to 5% (previously, it was 4.6%). However, the regulator still does not see significant progress on inflation and believes that the medium-term goal of 2% has not yet been achieved, so key rates will remain at the current level or lower until the inflation target is reached.

At a press conference, Christine Lagarde said that the growth of the Eurozone economy is likely to exceed earlier expectations and exceed the level observed before the pandemic by the end of this year. "The rebound phase in the process of economic recovery is increasingly intensifying," the head of the ECB noted. "More than 70% of the adult population of the European Union have been fully vaccinated, the economy has opened up, which allows consumers to increase spending, and companies to increase production," Christine Lagarde said. "However, the new delta strain and its spread may slow down the current recovery," Lagarde summed up.

From all of the above, it follows that the ECB takes the same cautious position on tightening monetary policy as the Bank of England and the Fed. Of course, judging by the number of conversations, the probability of curtailing the QE program by British and American regulators is much higher. However, we recall that there are no specific statements that both regulators are ready to start this. Thus, the September meeting of the European Central Bank can be considered moderately positive. However, at the same time, it is frankly passing since Christine Lagarde did not tell the markets anything new and important.

As a result, we probably saw a very poor reaction of the markets, which could still be stronger. However, the euro/dollar pair continues to trade with minimal volatility, practically not reacting to most macroeconomic statistics and the fundamental background. Of course, if we do not consider the movement by 20 points as a reaction. Thus, we believe that buying the pair is still more appropriate. However, we need to wait for the quotes to return to the area above the moving average. The lower channel of the linear regression has already turned up, so the technical picture signals a very likely trend change to an upward one. It remains only to wait until the price returns above the moving average and the markets actively trade the pair. 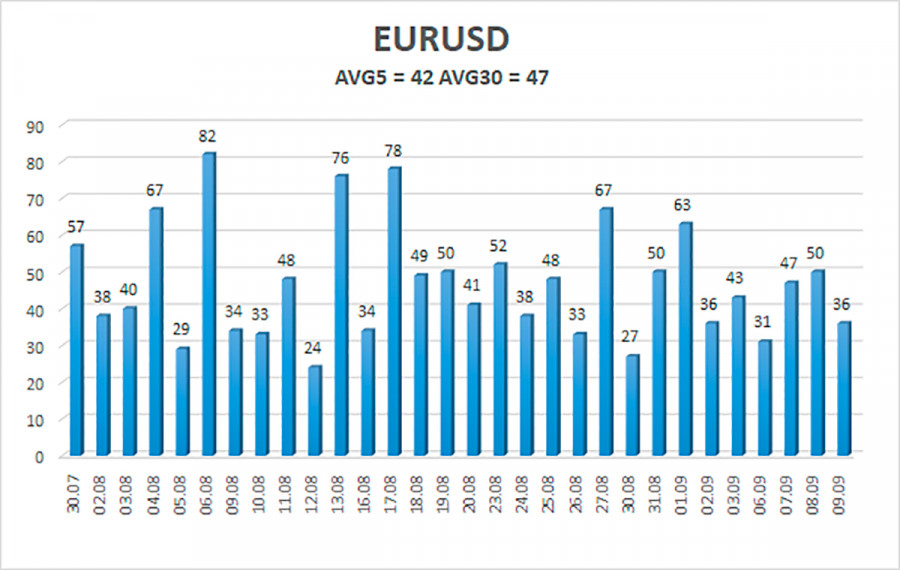 The volatility of the euro/dollar currency pair as of September 10 is 42 points and is characterized as "low." Thus, we expect the pair to move today between the levels of 1.1790 and 1.1874. A reversal of the Heiken Ashi indicator downwards signals a possible continuation of the downward movement.

The EUR/USD pair continues to adjust. Thus, today, we should consider new long positions with targets of 1.1871 and 1.1902 in case the price is fixed back above the moving average. The pair should be sold if the price bounces off the moving average with targets of 1.1810 and 1.1790. They should be kept open until the Heiken Ashi indicator turns up.