Overview of the EUR/USD pair. September 14. The speeches of Isabel Schnabel and Christine Lagarde can help the US dollar. 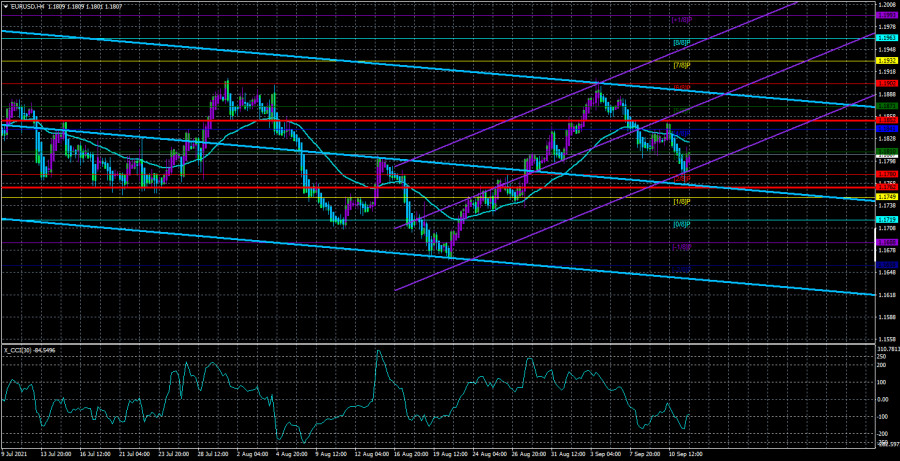 The EUR/USD currency pair was trading on Monday with its usual volatility not exceeding 50 points. The downward movement continued after the price was fixed below the moving average line. Thus, at this time, we are talking about a new downward trend. The euro/dollar pair seems to have again set its sights on the level of 1.1700, which has already been worked out several times before. Recall that we consider the level of 1.1700 as the target for the second round of the corrective movement against the global upward trend. We recommend switching to a weekly timeframe to see the whole picture, where both the trend and the corrections against it are visible. However, there are already two points that frankly confuse us in the conversation about the forecasts for the resumption of the upward trend. First, the pair has been correcting against the global upward trend for almost nine months. And during this time, it was not able to adjust by more than 600 points. Thus, at this rate, the correction will soon take longer than the trend itself. Second, traders persistently return the pair to the level of 1.1700 from time to time. And if the price works out at the same level many times, this indicates that it can eventually be overcome. Thus, we draw attention to the fact that there are still no good reasons for the growth of the US currency. The Fed has not announced the curtailment of the QE program.

Moreover, it is now absolutely unclear when it can announce this. It may happen in September and possibly in December. Thus, at this time, the fundamental background has not changed at all. But also, the volume of freshly printed dollars that enter the American economy from the Fed has not changed. According to COT reports, professional traders have been actively reducing their net position in the last six months. It means that they got rid of contracts to purchase the euro and opened contracts for sale. However, this still did not lead to the formation of a new downward trend. Therefore, it is easy to assume that some other factor levels this factor. Namely, the money supply is growing faster than in the Eurozone. Thus, if the bears still manage to lead the pair through the level of 1.1700 on the nth attempt, then the probability of forming a new downward trend will increase significantly. But so far, this has still not happened.

Now let's look at what awaits us in the new week. On Monday, no macroeconomic statistics were published either in the United States or in the European Union. Therefore, there is nothing much to discuss. Another speech was planned by Christine Lagarde, from whom there was no news throughout August. But in September, this is Lagarde's third performance in a row. However, last Thursday, Lagarde did not report anything that could be reflected on the chart of the currency pair. On Friday - nothing interesting at all, and more attention was paid to the words of a member of the executive committee, Isabel Schnabel. She said that inflation would begin to decline next year. Schnabel also said that inflation would continue to grow in 2021. However, the ECB is not going to react to short-term fluctuations in this indicator. Earlier, Christine Lagarde said that the ECB could make adjustments to some monetary policy instruments. However, there can be no talk of tightening it now.

Traders will have to wait until tomorrow for the next event in the European Union. On Wednesday, the EU will publish a report on industrial production in July, and Isabel Schnabel will also give another speech. On Thursday - another speech by Christine Lagarde, and on Friday - the consumer price index in the European Union for August. Almost every event is potentially significant. However, at the same time, the markets can easily ignore anyone, or its essence can be insignificant. It even applies to the report on European inflation. In July, the consumer price index rose to 3%, but this value may not change by the end of August. The markets did not react particularly zealously to the growth from 2.2% y/y to 3.0% y/y. Thus, any minimal change in the indicator or its absence is even more likely not to be followed by any reaction.

Nevertheless, Christine Lagarde has already made it clear that there can be no talk of any tightening of monetary policy in the near future. If PEPP is reduced, the standard APP QE program will be increased. Against this background, the dollar may show modest growth. 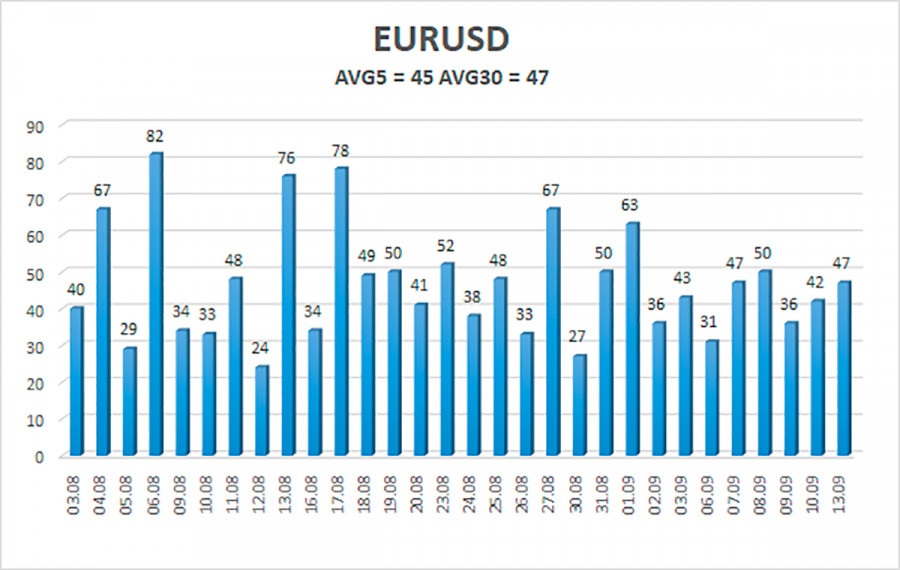 The volatility of the euro/dollar currency pair as of September 14 is 45 points and is characterized as "low." Thus, we expect the pair to move today between the levels of 1.1762 and 1.1852. A reversal of the Heiken Ashi indicator downwards signals a possible continuation of the downward movement.

The EUR/USD pair has started a new round of correction against the downward trend. Thus, today, we should consider short positions with targets of 1.1780 and 1.1762 in the case of a reversal of the Heiken Ashi indicator down. Purchases of the pair should be opened if the price is fixed above the moving average with targets of 1.1852 and 1.1871. They should be kept open until the Heiken Ashi indicator turns down.

Interesting? Write a comment below.
 Overview of the EUR/USD pair. September 14. The speeches of Isabel Schnabel and Christine Lagarde can help the US dollar.
Forward 
Backward 