Overview of the EUR/USD pair. September 15. Inflation in the US did not give a clear answer to the main question. 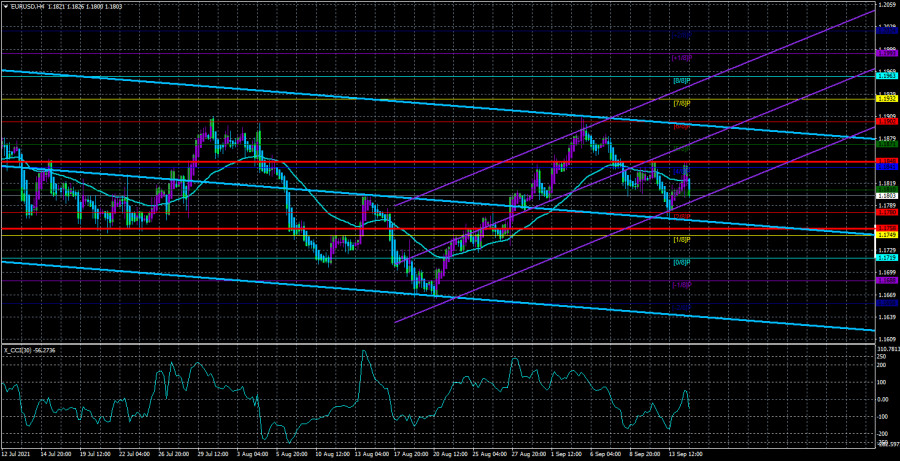 The EUR/USD currency pair on Tuesday worked out the level of 1.1805 (present on the lower timeframes) and tried to start an upward movement. Since the pair's volatility remains relatively weak, it is quite difficult to say about 40-50 points of upward movement that it is an upward trend that has resumed. Nevertheless, the pair overcame the moving average line. However, by the end of the day, it fell back below it. Recall that we continue to expect a strong or long-term upward movement, which will weaken the US currency, which we are waiting for. We remind you that the global and local fundamental background for the US currency has not changed at all. All that traders have at their disposal now is talk and rumors that the Fed is supposedly ready to start curtailing the QE program as early as September. However, many experts believe that the latest slowdown in the US economy will force the Fed to postpone reducing the volume of asset purchases until November or December. Yes, several members of the Federal Reserve have openly stated that they are in favor of an early reduction of the quantitative stimulus program. However, this does not mean that such a decision has already been made. Thus, the Fed continues to pour $ 120 billion into its economy every month, and it is still completely unclear when the QE reduction will be announced.

Consequently, the US currency can continue to fall in price in the long term on the same factors that it has fallen in price over the past year and a half. Moreover, most technical factors also remain on the side of maintaining the upward trend. The last round of the upward movement ended at the beginning of this year (in January). Accordingly, the pair has been correcting for nine months, and during this time, it has managed to go down about 600 points, which is about a third of the upward trend. Thus, we believe that a new fall in the US currency is long overdue. It remains only to wait for the volatility of the euro/dollar pair to grow at least a little.

Meanwhile, in the States, the inflation report for August was published. There was also a lot of talk and rumors associated with this report. By and large, this report was the last important macroeconomic event before the next Fed meeting, which will be held on September 22-23. And this report largely determines what decision the Fed will make at this meeting. We said that if inflation continues to rise, then the chances of curtailing the QE program in September will seriously increase. The Fed will be under pressure from investors and traders who have called for a long time to stop price growth. However, if inflation starts to slow down, then the Fed, on the contrary, gets some delay for tightening monetary policy since the main goal (the recovery of the labor market) is more easily achieved with the use of QE. As a result, inflation at the end of August was 5.3% y/y, which is 0.1% less than a month earlier. In general, there were no significant changes at all. 0.1% is not a change. Therefore, unfortunately, no conclusions can be drawn based on this report. However, the markets reacted to this report with sales of the US currency, and quite large-scale, since in the first half-hour after the report, the euro/dollar pair immediately increased by 50 points, which is more than the pair usually passes per day in recent months. Thus, we can conclude that the markets saw a negative for the US currency in this report. And there can be only one negative. The lower the inflation, the further the curtailment of QE. The markets probably now believe that the Fed will not rush to reduce "investment" in the economy. Respectively, the dollar will remain weak. In August, there was an increase in cases of coronavirus and its new strains in the United States, so many experts had serious concerns that the American economy would begin to slow down significantly. However, already in September, the number of cases of infection went down, so perhaps the next "wave" of the pandemic will decline. At least, so far, there is no talk of a "lockdown" in the States, which means that the economy will continue to remain open. There will still be some pressure because of the virus, but not as destructive as with a "lockdown" or a "hard" quarantine. 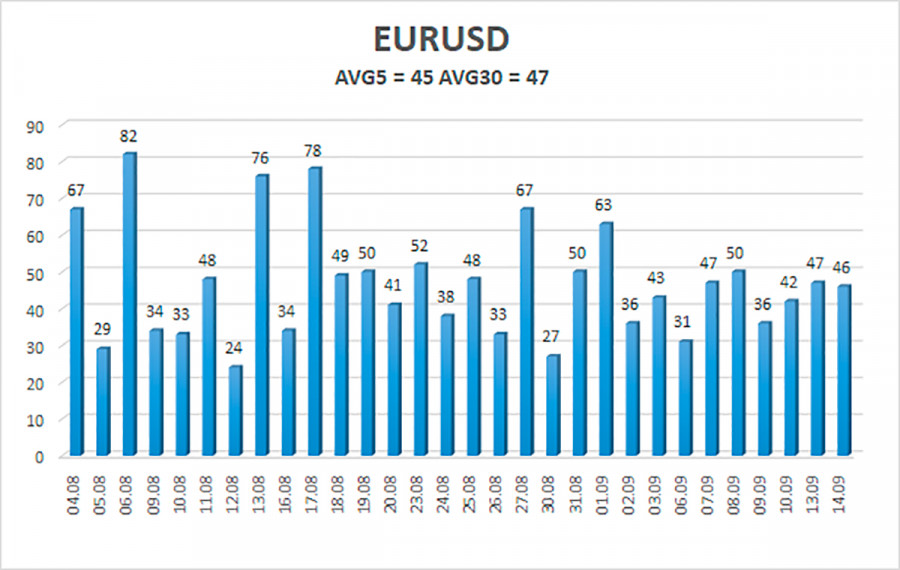 The volatility of the euro/dollar currency pair as of September 15 is 45 points and is characterized as "low." Thus, we expect the pair to move today between the levels of 1.1758 and 1.1848. A reversal of the Heiken Ashi indicator downwards signals a possible resumption of the downward movement.

Interesting? Write a comment below.
 Overview of the EUR/USD pair. September 15. Inflation in the US did not give a clear answer to the main question.
Forward 
Backward 