Overview of the EUR/USD pair. September 17. The dollar suddenly went up. Did the markets believe in the cancellation of incentives? 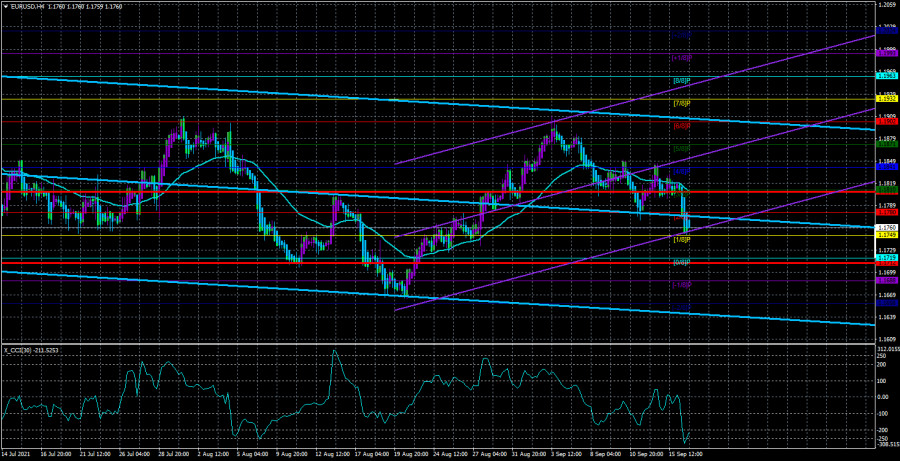 The EUR/USD currency pair went down quite unexpectedly on Thursday. At the same time, it is quite strong and almost recoilless. The downward movement began in the early morning and lasted all day. Therefore, it is hardly possible to conclude that it was somehow connected with macroeconomic statistics or the fundamental background. Moreover, the pair has been showing daily volatility of about 40 points for several months now, which is visible in the illustration below. Therefore, the downward movement by more than 60 points, with almost no pullbacks, caused surprise.

Nevertheless, we should be happy, since such movement is much better than "trampling" in one place. We can only hope that this was not a one-time movement, and the markets have "resurrected" and will now trade the euro/dollar pair more actively. Recall that the pair has not been able to either resume an upward trend or start a new downward trend in the last nine months. Twice, the quotes have slipped to the level of 1.1700 and are currently moving towards it again. It is possible that the entire correction against the global upward trend, which paused at the beginning of the year, will turn out to be more complex and longer. In this case, this is another disadvantage for traders of the euro/dollar pair, who expect a trend movement and not a 40-point movement every day. Thus, in the coming days, we need to see how the pair will behave around the level of 1.1700, which is in some way critical. If the price is firmly fixed below it, then it will be possible to talk about the prospects of a downward trend. But there is always an easier way to trade: intraday. Of course, with 40-point volatility, you can't trade much. However, if the movements increase even a little, it will mean that it will be possible to trade inside the day and earn more than 10 points a day.

It should be noted right away that the fundamental background remains quite negative for the US currency. Yesterday, a report on retail sales was published, which was significantly better than the forecast values. But the strengthening of the US dollar began long before the publication of this report. Thus, we are more inclined to believe that yesterday's movement was just an accident caused by the actions of a major player in the foreign exchange market. Or market participants have sharply begun to believe more in the probability of curtailing the Fed's quantitative stimulus program in September. Both options have the same degree of probability – 50%. In any case, you need to continue to observe the pair's movements to understand which of these assumptions is correct. In the meantime, I would like to remind you that America does not need an expensive dollar at all right now. It does not mean that the Fed will continue to do everything so that it continues to become cheaper. But other central banks of the world also have the possibility of currency interventions and influence on the exchange rate with the help of monetary policy instruments. And many central banks do not need an expensive national currency. Especially for those whose exports exceed imports. Or whose economy is built on sales of raw materials and energy carriers abroad. The States, with its abnormally large public debt that needs to be serviced, need a cheap dollar. Perhaps this is why US President Joe Biden wants the Fed to be led by a more "soft" person than Jerome Powell. However, all this is still a lyric. At this time, it is necessary to understand what prospects are opening up for the dollar? What are the possible reasons for its further rise in price against the euro? So far, it isn't easy to understand, given that the Fed continues to pour $ 120 billion into the economy every month.

In summary, we can say that the best thing that traders can do now is to pay closer attention to technical analysis and wait for the Fed meeting, at which a gradual curtailment of the QE program may be announced. If this happens in September, the US currency will get real and weighty reasons to continue strengthening. If not, then all the efforts of the bears will again look unpromising. Recall that, according to COT reports, major players have long been closing contracts for the purchase of euros and opening contracts for sale. However, for nine months of this year, the euro has not started a downward trend. The situation is about the same for the pound, where the mood of professional traders is already "bearish." Nevertheless, the British currency managed to adjust by 23.6% against the global upward trend. 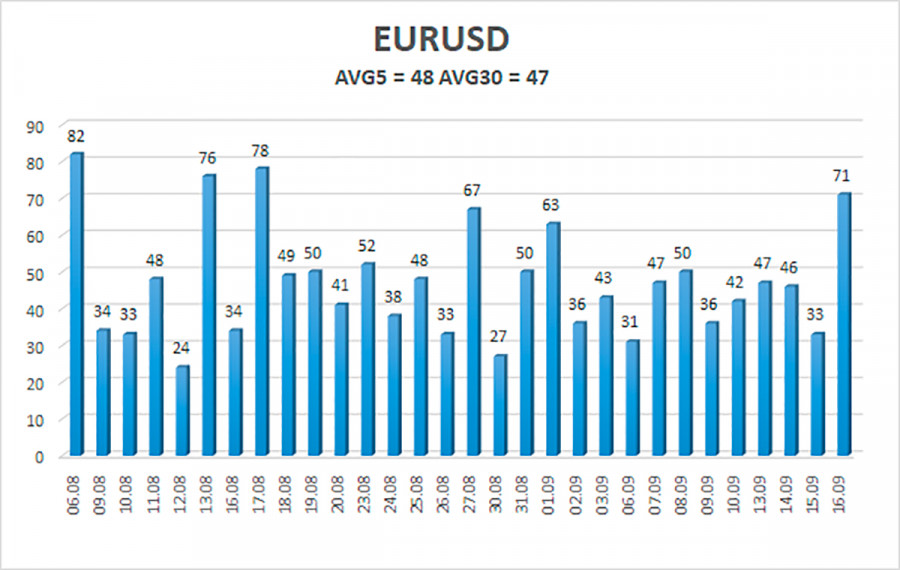 The volatility of the euro/dollar currency pair as of September 17 is 48 points and is characterized as "low." Thus, we expect the pair to move today between the levels of 1.1712 and 1.1808. The upward reversal of the Heiken Ashi indicator signals a round of corrective movement.

Interesting? Write a comment below.
 Overview of the EUR/USD pair. September 17. The dollar suddenly went up. Did the markets believe in the cancellation of incentives?
Forward 
Backward 