Overview of the EUR/USD pair. September 2. All attention is paid to the indicators of the state of the US labor market. 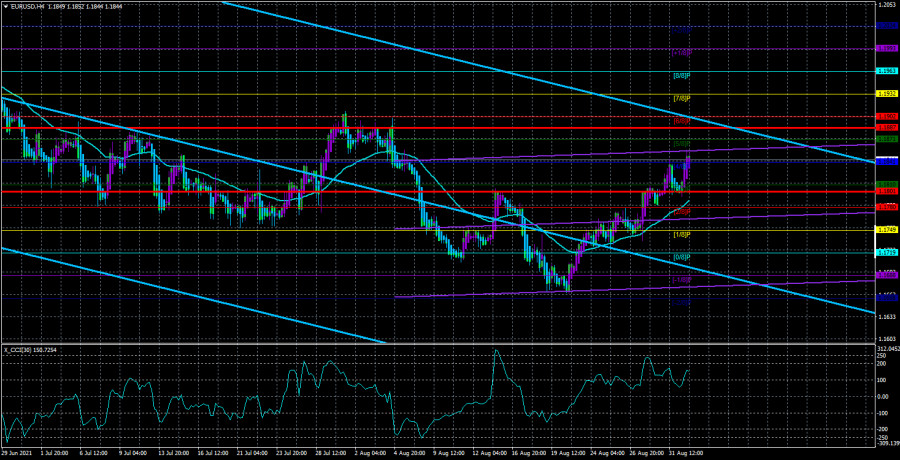 The EUR/USD currency pair was trading very calmly again. Recall that on Tuesday, the pair was trading with an increase for most of the day. However, it fell by 45 points. On Wednesday, the pair gained 45 points, and American statistics partly facilitated this. However, we will talk about the foundation and macroeconomics a little later. The most important thing is that now an upward trend is maintained on almost all timeframes. We have repeatedly said that we expect a resumption of the global upward trend, and many factors support this option. Starting from the most global technical factors: in 2019, the long-term downward trend for the euro/dollar pair is expected to have ended; the global upward trend persists. Ending with fundamental global factors: the Fed continues to pump the US economy with money; Jerome Powell does not yet say that he is ready to start curtailing the QE program. Therefore, from our point of view, the pair has excellent opportunities to resume the upward movement and return to the level of 1.2240 in the next month, which is currently the local maximum and the maximum for the last three years. On the 4-hour TF, the quotes continue to be located above the moving average line. However, both linear regression channels are still directed downwards. Therefore, an upward trend is just beginning to emerge, and with the current volatility indicators, it may take a very long time to form. Thus, we continue to look towards the fall of the US dollar.

And now we will begin to consider the fundamental and macroeconomic factors of a local nature. Yesterday, a report from ADP on the number of new employees in the US private sector was published. And this report turned out to be much worse than the forecast values, which predicted an increase of 500-600 thousand. It should be immediately clarified here that the ADP report is a secondary report on the state of the US labor market. The main one is Nonfarm Payrolls, which will be released this Friday.

Moreover, the dynamics of changes in values from report to report for ADP practically do not coincide with the dynamics of changes in the Nonfarm Payrolls report. In other words, the ADP report may fail from time to time. However, this does not mean that Nonfarm will fail in parallel. Rather, the opposite is true. The last two ADP reports were the smallest in the last six months. And the last two Nonfarm reports are the strongest in the last 11 months. Thus, it is not guaranteed that this Friday's Nonfarm report will be weak. However, at the same time, the probability of this is high. It should be understood that this is great when the number of Nonfarm grows from month to month. However, it is an acceleration of the growth of the number of jobs outside the agricultural sector. This value cannot be accelerated continuously. We have already said that the increase of 500 thousand new places is already an excellent result. And over the past two months, the number of Nonfarm has increased by 1.9 million. Thus, after two such strong reports, there is a high probability of a decline. Also, in the last month, the problem of a new "wave" of the epidemic in the United States has become increasingly acute. The number of diseases is growing, and business activity is decreasing. Representatives of the Fed are beginning to change their rhetoric regarding the curtailment of the QE program in the near future, and Jerome Powell refuses to name specific dates when the Fed may begin to reduce the amount of money injected into the economy. Therefore, there is every reason to assume that August will not be as successful a month as June or July. Consequently, the Nonfarm report may turn out to be weaker than the forecast of 750 thousand this week, and the markets may get new grounds for selling off the US currency.

Taking into account that traders have not managed to overcome the level of 1.1700, which we called the target for the last round of the global correction, the chances of the pair's growth are growing from this point of view. Hence the conclusion: if something in the fundamental or macroeconomic background does not change dramatically in the near future, the US dollar will continue to fall in price. And both linear regression channels on the 4-hour TF will gradually turn up. 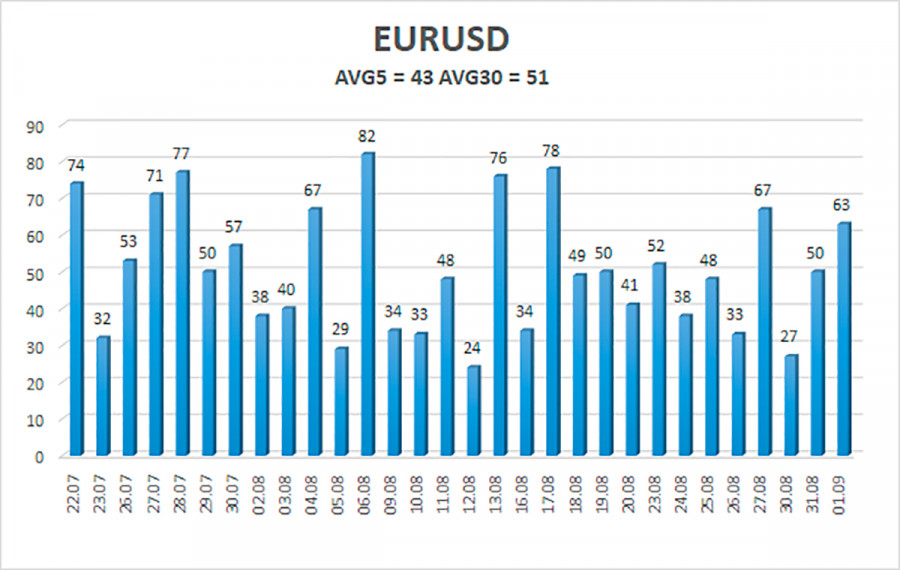 The volatility of the euro/dollar currency pair as of September 2 is 43 points and is characterized as "low." Thus, we expect the pair to move today between the levels of 1.1801 and 1.1887. A reversal of the Heiken Ashi indicator downwards will signal a new round of corrective movement.

The EUR/USD pair continues its weak upward movement. Thus, today, you should stay in long positions with targets of 1.1871 and 1.1887 until the Heiken Ashi indicator turns down. Sales of the pair will be possible if the pair is fixed back below the moving average line with targets of 1.1749 and 1.1719, and they should be kept open until the Heiken Ashi indicator turns up.

Interesting? Write a comment below.
 Overview of the EUR/USD pair. September 2. All attention is paid to the indicators of the state of the US labor market.
Forward 
Backward 