Overview of the EUR/USD pair. September 21. The markets are confident that at the September meeting of the Fed, it will be 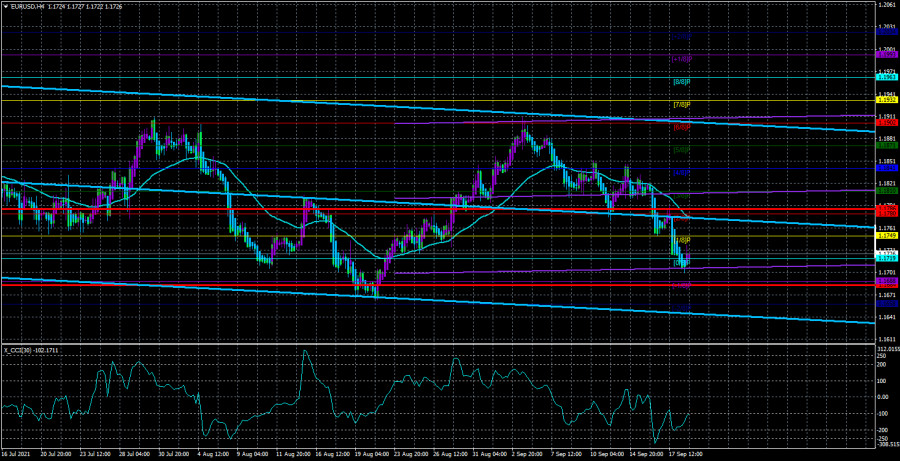 The EUR/USD currency pair continued to decline on Friday and Monday. We drew traders' attention to the illogical nature of the dollar's growth last Thursday when this round of movement had just begun. We then drew attention to the fact that the strengthening of the dollar is not based on macroeconomic statistics or a fundamental background. There were no clear reasons for the growth of the dollar. However, this movement has continued almost continuously over the past three days. Therefore, we can only link it with the upcoming Fed meeting, which will be announced this Wednesday. In principle, it will not be possible to build many assumptions now in any case. The possible decision of the Fed to curtail QE has been discussed over the past few months. And it is not only discussed by market participants but also finds its confirmation in the statements of the Fed's monetary committee members. Most of them support the completion of the stimulus program. Thus, these are not just traders' dreams. The probability of announcing the end of QE is high. At least, the markets believe in this now, so they are buying the dollar since the tightening of monetary policy is a positive factor for the US currency. Thus, the downward trend for the euro/dollar pair is currently maintained. Quotes continue to be located below the moving average line, and the lower channel of linear regression, which has just turned up, is already turning down. The quotes have already fallen to the area of the level of 1.1700, which we have repeatedly called the target for the second round of the global correction of the pair against the upward trend, which began a year and a half ago. If this level is overcome, it will finally be possible to discuss the prospects for forming a new long-term downward trend for the euro/dollar pair. However, the problem is that in addition to the future meeting of the Fed and the expectations of the markets, the US dollar now has practically no trumps. We can even say that the current growth of the US currency is accidental. If the Fed does not announce the curtailment of QE on Wednesday, then purchases of the dollar may be replaced by its sales, with massive ones. Thus, from a fundamental point of view, the current growth of the US currency is very unstable.

Let's return to the Fed meeting and the prospects for the US dollar. We believe that if the decision is made, the US currency will receive support. But the behavior of the market participants themselves will be of great importance. Now the dollar is getting more expensive "upfront," so on Wednesday, even if the Federal Reserve announces a gradual reduction in QE, this may provoke a market backlash because the decision to curtail QE has already been worked out. Thus, we again emphasize the proximity of the 1.1700 level and the very likely new upward reversal of the pair.

It is also necessary to understand what other important fundamental events are waiting for traders this week. There are practically no important events and publications on Monday and Tuesday. On Wednesday, the results of the Fed meeting will be summed up and announced. On Thursday, business activity indices in the services and manufacturing sectors of the United States and the European Union and applications for unemployment benefits in the United States. On Friday – a speech by Jerome Powell. It turns out that there is nothing important this week except for the Fed meeting and Jerome Powell's speech. However, these two events can have a strong impact on all pairs that have the US dollar. Business activity indices practically do not play any role in the current circumstances. If their values do not suddenly collapse down, the markets are unlikely to pay attention to them at all. Thus, the entire current week will be permeated with the "spirit of the Fed."

Therefore, the pair is now in a certain state of waiting for "hour X." If there are real fundamental grounds for further sales, the price will break through and go below the level of 1.1700. And this will mean that the correction against the global upward trend may develop into an independent trend. And if this happens, we will have to completely revise the current state of things and draw new conclusions. Recall that for the last nine months, the pair was not flat but in a limited price range, having adjusted against the upward trend by only 600 points. This movement of the pair allowed us to assume that the upward trend would resume sooner or later. Thus, now we need to understand whether the US dollar will continue to strengthen if the Fed announces the end of QE and when the Fed will begin to reduce the volume of QE if this is not announced this Wednesday. 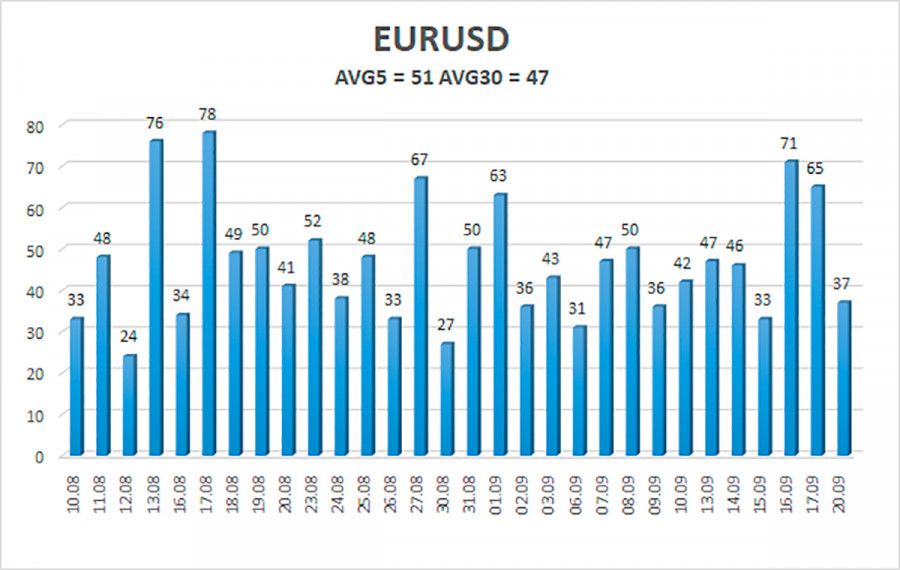 The volatility of the euro/dollar currency pair as of September 21 is 51 points and is characterized as "low." Thus, we expect the pair to move today between the levels of 1.1684 and 1.1786. The upward reversal of the Heiken Ashi indicator signals a round of corrective movement.

Interesting? Write a comment below.
 it will be, Overview of the EUR/USD pair. September 21. The markets are confident that at the September meeting of the Fed
Forward 
Backward 