Overview of the EUR/USD pair. September 22. "Day X" has come for the US dollar. 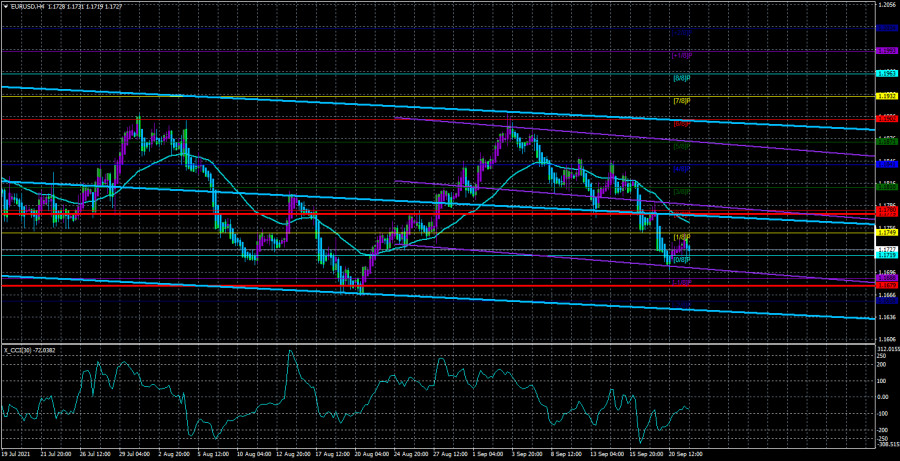 The EUR/USD currency pair on Tuesday, September 21, continued to trade very sluggishly and reluctantly. Recall that at the end of last week, the US currency rose quite a lot, and the volatility of the euro/dollar pair increased to a "normal" value. However, as it turned out later, this was a temporary surge in the activity of market participants. On Monday, the volatility again amounted to the more usual "less than 40 points", and on Tuesday, the situation did not change. Thus, we tend to believe that the markets formed all positions in preparation for the Fed meeting at the end of last week, which were expressed in dollar purchases. We believe that the markets are waiting to announce a gradual curtailment of the QE program at the Fed's September meeting. Thus, dollar purchases look quite logical. At the same time, at the beginning of this week, the activity of the markets decreased again, since all the necessary positions have been formed, and now we have to wait for official information from the Fed and personally Jerome Powell. But what will happen on Wednesday? It is extremely difficult to assume now. Today, the markets may start trading actively again in the morning. And they can wait until the evening to clearly understand what policy the Federal Reserve adheres to at this time. We believe that the second option is more likely. But in any case, what is important now is not what happens in the market before the meeting, but what will happen after. From a technical point of view, the downward trend for the pair remains as the price continues to be located below the moving average line. Both linear regression channels are formally directed downwards, but in fact, they are directed sideways. If you zoom out or switch to the higher timeframe, you can see that the pair has been in the side channel for about nine months between the levels of 1.1700 and 1.2300. There is a minimal downward trend, but no one can deny that the US currency has not been able to even adjust against the euro for more than nine months. Of course, a decrease of 600 points can be considered a correction, but certainly not a downward trend. Thus, the level of 1.1700 remains very important for determining the future of the pair. If today or later this level is confidently overcome, then the chances of forming a downward trend on the 24-hour timeframe will significantly increase. But for now, we are still inclined to the initial version with the resumption of the global upward trend.

In the last few weeks, the conversations on the foreign exchange market concern only the Fed and the possible curtailment of the quantitative stimulus program. We will not repeat ourselves since everything that can be said has already been said on this topic. However, it is worth recalling that not only this decision is important. In addition to the decision on the QE program, there will also be a speech by Jerome Powell and a summary of forecasts on key indicators of the state of the economy. In principle, traders rarely react to forecasts, but Powell's speech is a really important event. Powell's rhetoric will make it clear to the markets when the volume of the QE program will begin to shrink if this is not said directly. Powell can also make it clear when the regulator is going to start raising the key rate. Recall that most experts believe that not earlier than 2023, but some analysts believe that several increases are possible as early as 2022. However, everything will depend again on the QE program. It is unlikely that the Fed will start raising the rate before it fully completes its injections into the US economy. Thus, whatever one may say, the QE program and the timing of its completion will still be of the greatest importance.

What could happen tonight? We believe that the option of a fall in the US dollar is not excluded, even if the beginning of the curtailment of the QE program is announced. The fact is that the US dollar has been getting more expensive for more than a week, and this is at a time when its fall would be preferable. We have already said earlier that most of the technical and fundamental factors speak in favor of further growth of the pair. Thus, the possible decision of the Fed on the QE program may already be taken into account in the current exchange rate of the pair. If so, then the dollar risks losing the only trump card in the confrontation with the euro at this time. Therefore, we believe that today the dollar may start a new decline. Although, of course, if the Fed announces the curtailment of QE, most traders will look towards selling the pair. 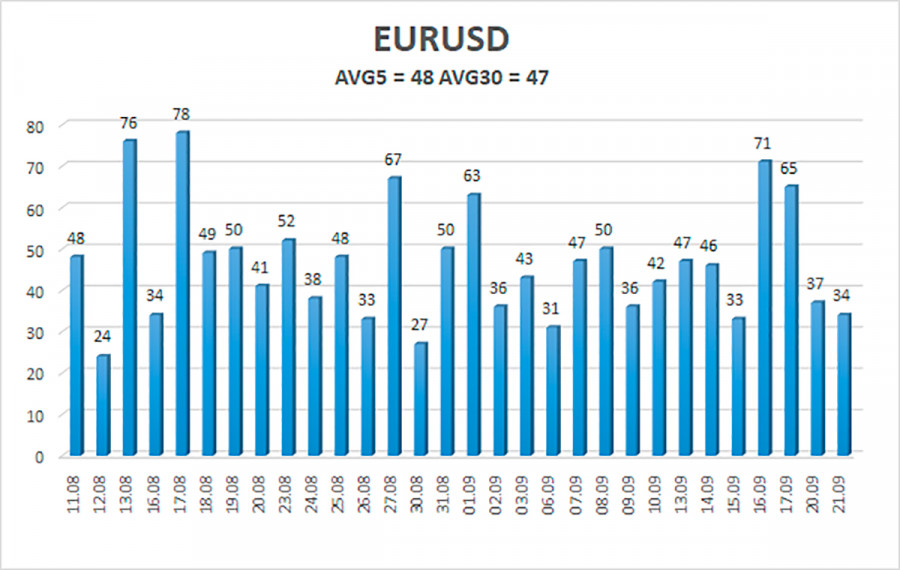 The volatility of the euro/dollar currency pair as of September 22 is 48 points and is characterized as "low." Thus, we expect the pair to move today between the levels of 1.1679 and 1.1775. A reversal of the Heiken Ashi indicator downwards signals a possible resumption of the downward movement.

Interesting? Write a comment below.
 Overview of the EUR/USD pair. September 22. "Day X" has come for the US dollar.
Forward 
Backward 