Overview of the EUR/USD pair. September 24. A "passing" meeting of the Fed. 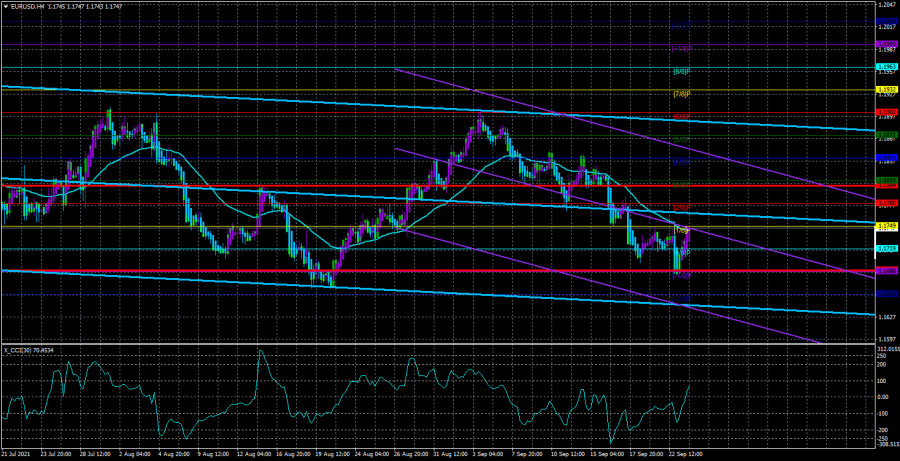 The EUR/USD currency pair continued its sluggish movement even on the day of the announcement of the results of the Fed meeting. All that the pair could show was a movement of 70 points down. The price on Wednesday passed 30 points up and only then 70 points down. Thus, the dollar rose by 40 points, and the next day it was already falling in price again. Consequently, the US currency rose by only 40 points after the announcement of the results of the meeting, and these 40 points can be considered a full-fledged market reaction to an important fundamental event. Thus, the reaction was very weak, as were the results of the FOMC meeting itself. Although the markets were waiting for this event and associated certain changes in the Fed's monetary policy, no changes followed. It means that the meeting can be considered a passing one. However, we will talk about the "foundation" a little below. Here I would like to note that the pair's quotes fell to the level of 1.1700 once again. Recall that we consider this level to be the target for the second round of the corrective movement against the global upward trend, which has been going on for a year and a half. The previous round of correction also ended near this level, and the downward movement that occurred a few weeks ago also ended near the 17th level. Thus, from our point of view, there is a high probability that a rebound and a resumption of the global upward trend will follow from this level. Of course, this hypothesis should not be worked out without technical confirmation.

Moreover, we have been waiting for the resumption of the upward trend for at least several months. And all this time, the pair continues to adjust in the channel 1.17-1.23 and does not want to leave it for nine months. Thus, the movement can be anything. However, if the upward trend resumes, it is better to expect it now than when the quotes are already around the 20th level.

Now, as for the Fed meeting itself and its results. As mentioned above, there were no special results. More precisely, there were no changes in monetary policy. Again, there were only conversations, hints, and half-hints. On the one hand, the Fed cannot be accused of an extravagant and cautious position. As we have already said in our other articles, a new "wave" of the "coronavirus" epidemic continues to rage in America. 120-130 thousand people are infected every day. And even if they all carry the disease very easily (although in reality not all of them), this slows down the economic recovery, as people become more cautious, spend less, save more and try to visit public places less. Thus, given the weak Nonfarm Payrolls and high inflation, which so far shows no signs of slowing down, it is not surprising that the Fed decided to postpone the decision to wind down the QE program at a later date. It is better to wait a few more months and look at the key macroeconomic indicators than to start curtailing QE now and then regret it.

Moreover, the next Fed meeting will be held in November. It means that the regulator has at least a month and a half to understand what real consequences a new "wave" of the pandemic will bring to the economy and how the labor market will recover, which is the main goal of the Fed. Based on all this, nothing is surprising because the reaction of traders was practically absent.

Other important statements include a reduction in the GDP forecast for 2021 (this means that the Fed expects the recovery rate to fall), an increase in unemployment forecasts for 2021, as well as Jerome Powell's statement that the QE program will be fully completed in the middle of next year. Theoretically, this statement could support the dollar, if only not for the fact that the Fed has long hinted at the beginning of the procedure for curtailing QE and will not start it in any way. It is also worth noting that the "dot plot" chart shows that already nine members of the monetary committee out of 18 expect a key rate increase in 2021. However, we remind you that expectations do not always correspond to reality. And now it makes no sense to buy the dollar since somewhere in December 2022, the Fed will raise the rate by 0.25%. 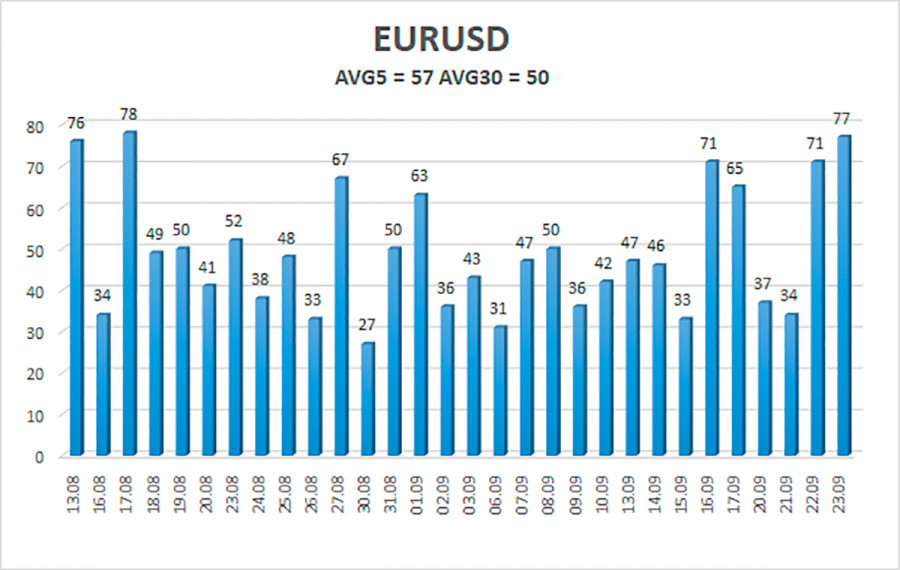 The volatility of the euro/dollar currency pair as of September 24 is 57 points and is characterized as "average." Thus, we expect the pair to move today between the levels of 1.1689 and 1.1804. A reversal of the Heiken Ashi indicator downwards signals a possible resumption of the downward movement.

Interesting? Write a comment below.
 Overview of the EUR/USD pair. September 24. A "passing" meeting of the Fed.
Forward 
Backward 