Overview of the EUR/USD pair. September 28. Inflation in the European Union may continue to accelerate, which will force 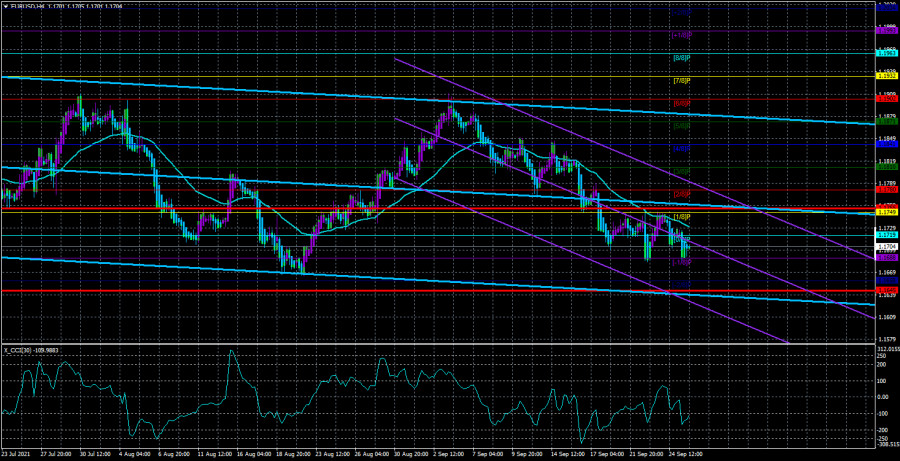 The EUR/USD currency pair continues to trade near the level of 1.1700 and from time to time checks its strength. Since the quotes continue to be located under the descending trend line on the hourly timeframe, and below the moving average line on the 4-hour timeframe and with two linear regression channels directed downwards, the downward trend persists although we have been expecting the resumption of the upward trend for a long time. However, in the global plan (24-hour timeframe), all the current movement (and all the movement for the last 9 months) is still treated simply as a correction. Thus, the correction can still be completed at any time. Moreover, it is quite difficult to find adequate reasons for explaining the current growth of the US currency. The Fed held a meeting last week, and the ECB meeting a week earlier. No high-profile decisions were made. The "foundation" has nothing to do with the current movement of the euro/dollar pair. The "foundation" and "macroeconomics" still have only a local impact on the movement of the pair. In global terms, it seems that technical factors are in the first place. For example, on Monday, the pair worked out the 38.2% Fibonacci level for the second time. It means that over the past nine months, the price has adjusted by 38% of the entire upward trend that began in March 2020. 38.2% is an important Fibonacci level and overcoming it can open the way for the pair to the level of 50.0% (1.1490). It is 200 points lower. It is not to say that such an option is unlikely. We are based on the fact that the pair failed to overcome the level of 1.1700 at least three times. However, fixing below this level is still possible. It would be much more pleasant if the further strengthening of the US dollar had concrete grounds. However, as already mentioned, it is now impossible to link the general fundamental background with the sales of the euro/dollar pair.

Nevertheless, it is still not recommended to lose sight of the fundamental background and "macroeconomics". Moreover, there will be quite a lot of important and interesting events this week. For example, ECB President Christine Lagarde was scheduled to speak on Monday. It should be noted at once that recently the heads of the Fed and the ECB have been talking mainly about inflation, the labor market, and the prospects for tightening monetary policy. But these conversations in practice remain only conversations and do not yet develop into concrete actions of central banks. Inflation and the state of the labor market are macro indicators that do not change quickly and are reported once a month. Thus, Christine Lagarde or Jerome Powell, even theoretically, do not have the opportunity to share new and important information with the markets at each of their speeches. Most of their speeches will not find any reflection on the charts of the main currency pairs. By the way, Lagarde's speech is also scheduled for Tuesday, and in addition to it, Powell's speech is also planned. But it will be very sad with the macroeconomic statistics in the first two days of the week. On Monday, nothing. On Tuesday – this is just one indicator of consumer confidence in the United States. We do not take into account such reports as the housing price index or the balance of foreign trade in goods, since they rarely cause a reaction of the markets and this reaction is always extremely weak. By the way, US Treasury Secretary Janet Yellen will also give a speech today. A lot of attention is also focused on it now since the United States is once again on the verge of a technical default in its history. And Janet Yellen, in almost every speech, calls on Congress to provide assistance as soon as possible and raise the national debt limit, which will help her department to continue making payments and placing government bonds of various maturity on the markets.

Most interestingly, there will be two more speeches by Christine Lagarde and Jerome Powell on Wednesday. It means that both functionaries cannot say something important every day. And unimportant information will not provoke any reaction from traders. Therefore, we are not too interested in it. But there will be trouble with macroeconomic statistics on Wednesday again. On Thursday, the unemployment rate for August will be published in the European Union, which may fall to 7.5% according to experts' forecasts. Moreover, a report on GDP for the second quarter will be published in the United States on this day. However, the first report rarely attracts the attention of traders. The second one will be released for the second or third time, as it has several estimated breakpoints. Accordingly, it is unlikely that the markets will be overly impressed by the value of the growth of the US economy by 6.6%-6.7% in the second quarter. They have been familiar with these figures for a long time and are ready for them. Also on this day, another "conditionally important" report will be published - applications for unemployment benefits. At a time when the whole world was just facing the "coronavirus", this indicator was of great importance, since it reflected how many Americans lost their jobs in one week. Now, when the situation has more or less stabilized, this report has practically no impact on the foreign exchange market.

On Friday, the final index of business activity in the manufacturing sector and the consumer price index for September will be published in the European Union. It is expected that inflation will continue to accelerate and will already be 3.3% y/y. From our point of view, it is the inflation report that will have the highest value for traders. After all, the higher the value of this indicator, the more likely it is that the PEPP program will begin to shrink in the near future, although Christine Lagarde did not mention a single hint about this. In the United States, the ISM manufacturing index will be published on this day, which is more important than the standard Markit business activity index. However, the reaction to this report will follow only if the actual value is very different from the forecast. Also on Friday, the consumer sentiment index from the University of Michigan will be published, which recently provoked a fairly strong movement of the pair when it unexpectedly collapsed to 70 points.

Thus, we would say that this week the most important and interesting day will be Friday. The speeches of Christine Lagarde and Jerome Powell may be important and be practiced by traders, but the probability of this is low. 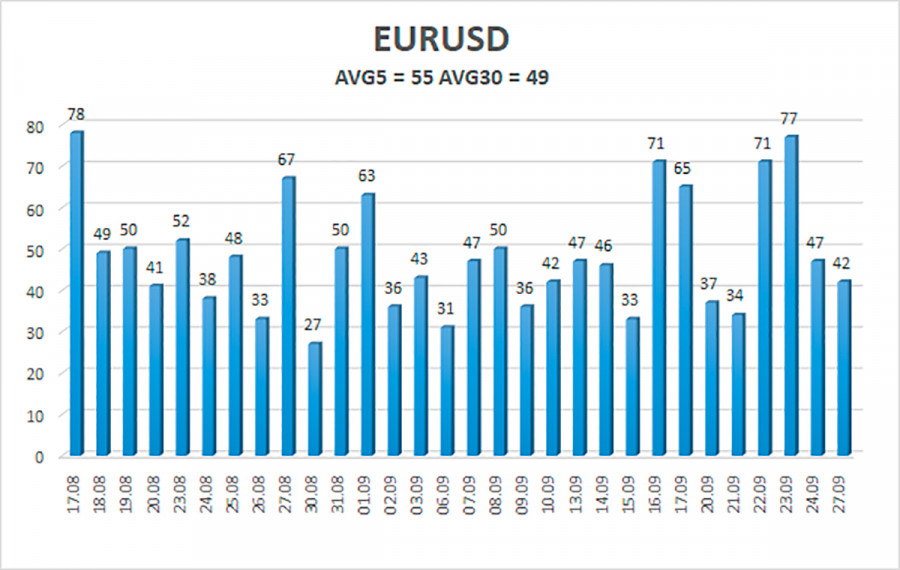 The volatility of the euro/dollar currency pair as of September 28 is 55 points and is characterized as "average". Thus, we expect the pair to move today between the levels of 1.1645 and 1.1755. The upward reversal of the Heiken Ashi indicator signals a round of upward correction.

The EUR/USD pair is trying to continue its downward movement but again failed to overcome the level of 1.1688. Thus, today, you should stay in short positions with targets of 1.1658 and 1.1645 until the Heiken Ashi indicator turns up. Purchases of the pair should be opened if the price is fixed above the moving average line with targets of 1.1780 and 1.1810. They should be kept open until the Heiken Ashi indicator turns down.

Interesting? Write a comment below.
 Overview of the EUR/USD pair. September 28. Inflation in the European Union may continue to accelerate, which will force
Forward 
Backward 