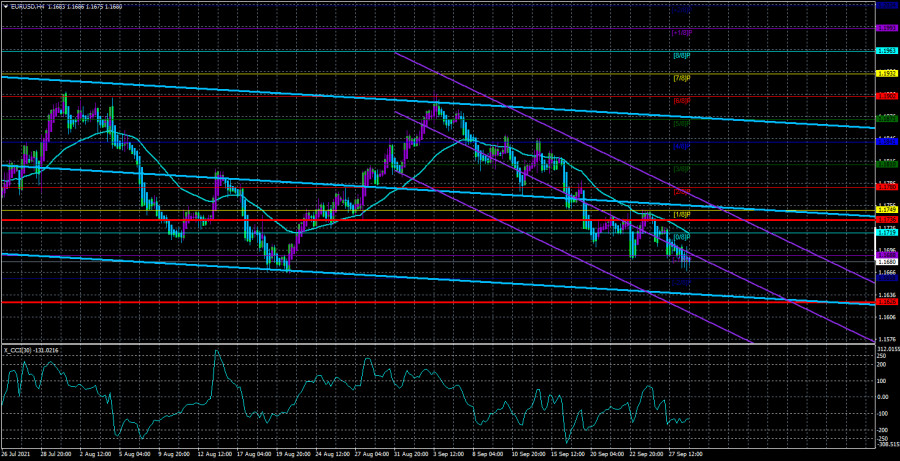 The EUR/USD currency pair still broke through the level of 1.1700 and continues its slow decline. Since the price is still below the moving average line on the 4-hour timeframe, the downward trend also persists. Thus, long positions should not be considered at this time, no matter how attractive the current levels are. Recall that the euro/dollar pair has been correcting against the upward trend for 9 months. During this time, it was able to go down a little more than 600 points, which is not the highest indicator. Nevertheless, the downward movement may continue, although there are no fundamental reasons for this at this time. To be more precise, the reasons can always be found or invented. However, we still try to be objective in assessing any fundamental events or macroeconomic indicators. And we do not see at this time due to what the US dollar can grow. If we consider the current downward movement simply as a continuation of the downward correction, which at the moment is only 38.2% Fibonacci, then everything turns out well. The pair can indeed correct by both 50% and 61.8% before resuming the upward trend. However, if we analyze the latest fundamental events, the question still arises, due to what the dollar is getting more expensive? Recall that the Fed did not change the key parameters of monetary policy in September. The chances that the QE program will begin to wind down in November have increased markedly. As well as the probability of a key rate increase in 2022. However, these are just expectations of future events. Markets can buy a particular currency based on them, but in this case, we can consider a possible change of the president in 2024 and US international relations for the next 10 years. We believe that there are no local fundamental factors that could support the dollar now. We also draw the attention of traders that the volatility of the euro/dollar pair remains very weak. In most cases, the pair continues to pass about 40-50 points a day, which is perfectly visible in the illustration below. With such intraday volatility, it is still very difficult to trade.

Meanwhile, at the beginning of the new week, two performances by Christine Lagarde took place at once. Both did not give traders any new information, so we cannot conclude that the fall of the euro was somehow connected with its performance. Moreover, her rhetoric did not have a "dovish" color. On the contrary, Lagarde said once again that high inflation is a temporary phenomenon and next year it will begin to decline until it reaches the target value of 2%. The head of the ECB also noted the high efficiency of the PEPP economic stimulus program and stated that it played an important role in the recovery of the economy after the crisis. It should also be noted that most experts do not expect the extension of the duration of the PEPP program or the expansion of its scope. However, the "coronavirus" can "surprise", so you need to be ready for everything.

But all this information is not news for the foreign exchange market, so it is unlikely that the continued decline of the euro is related to it. What do we have as a result? The meetings of the ECB and the Fed have been left behind and now in the near future traders will be able to pay attention only to macroeconomic reports. Of course, they will have a high degree of significance, but there will be very few of them. There is still an unfinished topic with the US government debt limit, which should be increased in the near future so that the States can avoid a technical default. However, this is not a topic that can have a serious impact on the dollar exchange rate. Moreover, the threat of technical default is a bearish factor for the dollar, not a bullish one. Also this week, a vote will be held for Joe Biden's "infrastructure package", which from the initially proposed $ 3.5 trillion may eventually be reduced to $ 1 trillion. It was stated on Monday by the Speaker of the House of Representatives Nancy Pelosi. She expressed confidence that the bill will be adopted this week, "since she never puts to the vote bills that will not be able to get the necessary number of votes."

The last thing I would like to say is that even taking into account the consolidation below the level of 1.1700, the quotes could not go far down. Therefore, an upward reversal can occur at any moment. 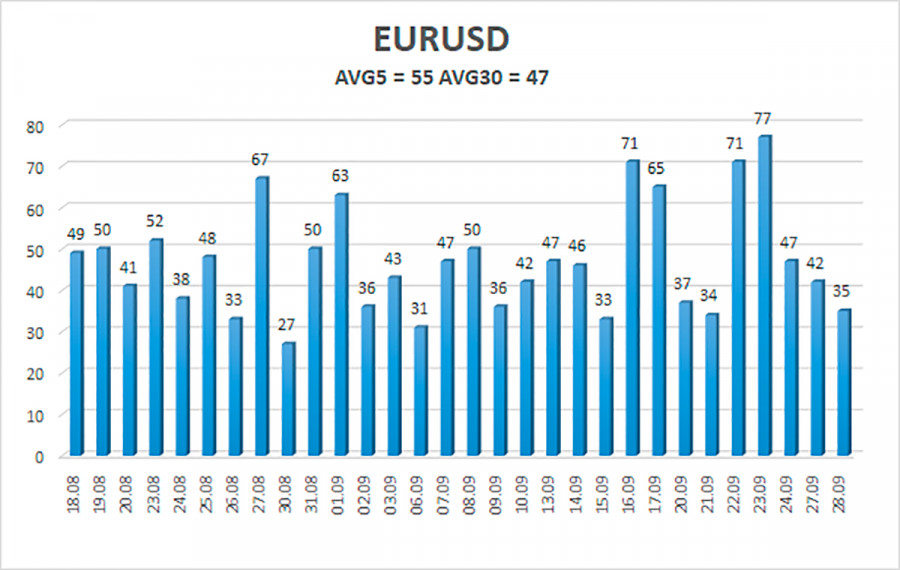 The volatility of the euro/dollar currency pair as of September 29 is 55 points and is characterized as "average". Thus, we expect the pair to move today between the levels of 1.1626 and 1.1736. The upward reversal of the Heiken Ashi indicator signals a round of upward correction.

The EUR/USD pair continues its downward movement and barely managed to overcome the level of 1.1688. Thus, today it is necessary to stay in short positions with targets of 1.1658 and 1.1626 until the Heiken Ashi indicator turns upwards. Purchases of the pair should be opened if the price is fixed above the moving average line with targets of 1.1749 and 1.1780. They should be kept open until the Heiken Ashi indicator turns down.