Overview of the EUR/USD pair. September 30. The speeches of Jerome Powell and Christine Lagarde provoke a rise in the dollar. 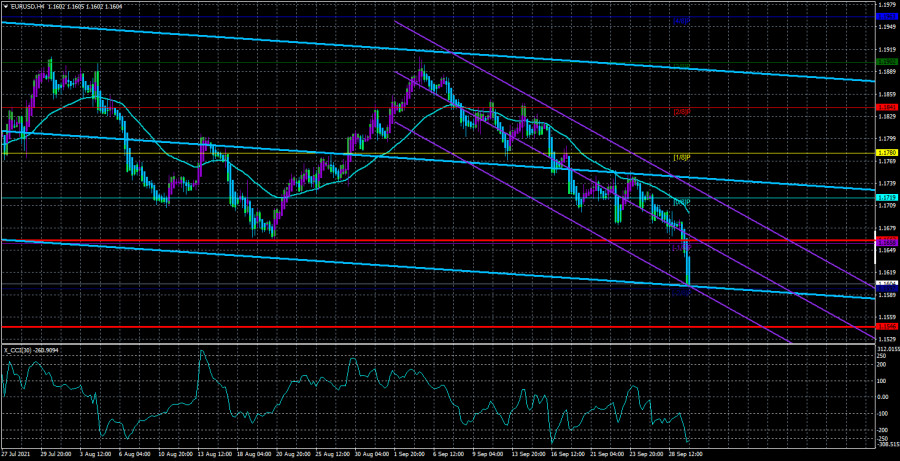 The EUR/USD currency pair still broke through the level of 1.1700 and now continues its downward movement. Although volatility remains low, at this time, it is already possible to talk about a trend with a fairly stable trend. Looking at the hourly chart, you can see that the pair has been declining for more than two weeks in a row. Thus, we are forced to state that the US dollar still found the strength to continue growing. Unfortunately, the fundamental reasons for the strengthening of the US currency are far from obvious.

Moreover, it seems that the markets are buying the dollar now by inertia. The pair has gained a good and stable course, so why not connect to this trend? It is quite possible to expect a decline in the pair to the level of 1.1600, and then to 1.1490, which is 50.0% Fibonacci. At the 50.0% Fibonacci level on the 24-hour timeframe, the bulls now have all hope. They cannot be called extremely weak at this time, but still, bears have a lot of pressure. From a technical point of view, the pair continues to be located below the moving average line, which means there are no grounds for buying the pair at this time. Both linear regression channels are now directed downwards, so only sales should be considered. Recall that specific technical signals should confirm any fundamental assumptions or hypotheses. Since the price failed to rebound once again from the level of 1.1700, it means that the downward movement can continue now.

The reason that has the greatest impact on the growth of the dollar is the high probability of the Federal Reserve curtailing the QE program. At least, it is extremely difficult to find other reasons. Jerome Powell, who speaks almost every day after the Fed meeting last week, makes it clear to the markets with each of his new speeches that his department is preparing to announce the curtailment of QE. For example, on Tuesday, he said that at the last meeting of the regulator, the necessary test was passed before the start of the curtailment of QE. At the same time, Jerome Powell notes that the labor market is still far from its full recovery. But, on the other hand, the Fed will not complete the asset purchase program in one day. Accordingly, even before the middle of next year (as Powell himself stated earlier), money will continue to flow into the economy, stimulating it and the labor market. However, the markets are already "preparing a sleigh for the winter." And since the Fed has almost completely announced the curtailment of QE this year, then based on this factor, the strengthening of the American currency can now be observed. The European Union is also thinking about curtailing QE, which they call PEPP. And both of these programs may be completed with a difference of only a few months. Recall that central banks like to look at each other's actions and only then make decisions. Powell is now saying that the QE program can be fully completed by the middle of next year, and Christine Lagarde clarifies that the ECB is not going to extend the duration of the PEPP program, which expires at the end of March 2022.

And yet, the dollar has been showing very dubious growth in recent weeks. Recall that by October 18, the US Congress must vote to increase the public debt limit to avoid default. And although we do not think that this is a big problem, since it is not profitable for any of the politicians to have this default happen, there is a threat of some confusion. Experts have already started talking about a new "shutdown," and after the coronavirus pandemic, many countries can be considered bankrupt since the size of their debts already exceeds 100% of GDP. Nevertheless, the dollar is showing growth when the Fed has not even begun to curtail QE, and the threat of default looms over the States. It's a very bad time for this.

Thus, even considering the overcoming of the 1.1700 level, we still do not expect a strong fall in the European currency. Of course, large and professional traders can have their trading strategy, and it is better for small and private traders to always follow them, which is why the concept of "trend" exists. Therefore, as long as the price is below the moving average, you should sell the pair no matter what. 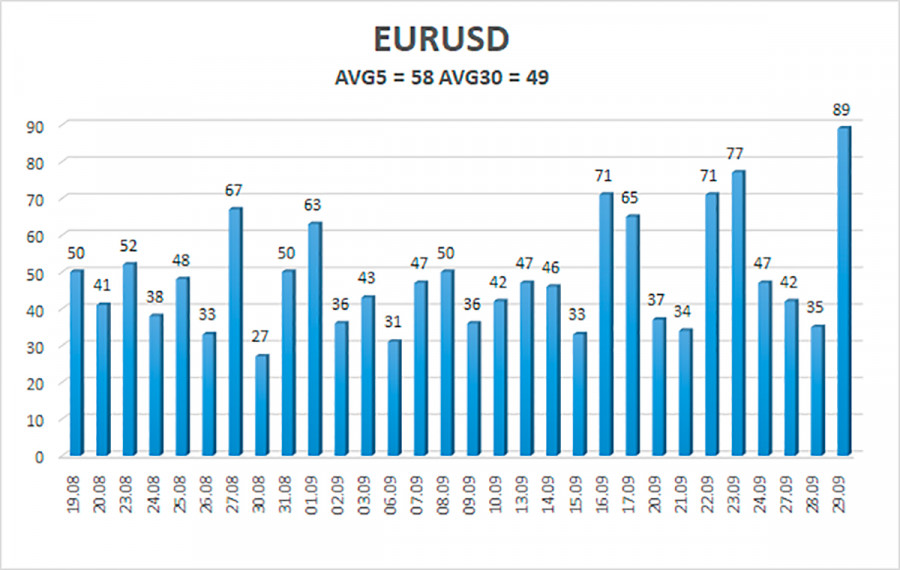 The volatility of the euro/dollar currency pair as of September 30 is 58 points and is characterized as "average." Thus, we expect the pair to move today between the levels of 1.1546 and 1.1662. The upward reversal of the Heiken Ashi indicator signals a round of upward correction.

The EUR/USD pair continues its downward movement and has already fallen to the level of 1.1600. Thus, today, it is necessary to stay in short positions with a target of 1.1546 until the Heiken Ashi indicator turns up. Purchases of the pair should be opened if the price is fixed above the moving average line with targets of 1.1780 and 1.1841. They should be kept open until the Heiken Ashi indicator turns down.

Interesting? Write a comment below.
 Overview of the EUR/USD pair. September 30. The speeches of Jerome Powell and Christine Lagarde provoke a rise in the dollar.
Forward 
Backward 