Overview of the EUR/USD pair. September 7. Two speeches by Christine Lagarde – the key events of the week 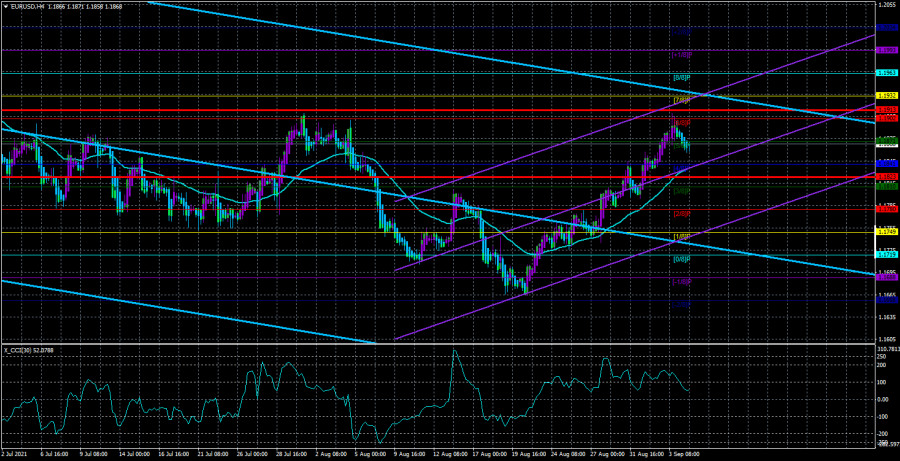 The EUR/USD currency pair was trading more than calmly on Monday. However, there is absolutely nothing surprising since the pair has been in this rhythm for several months. The illustration below clearly shows that the lion's share of all trading days ends with a volatility of 50 or fewer points. Thus, in general, the current movement can only be called very weak. From a technical point of view, the pair's quotes continue to be located above the moving average line. Therefore, traders have the right to expect the continued strengthening of the European currency. We also remind you that the last two most important events – the speech of Jerome Powell in Jackson Hole and the publication of the Nonfarm Payrolls report – did not change anything in the fundamental background. Jerome Powell made it clear that he is not going to rush to curtail the QE program. The Nonfarm report showed that after two months of almost a million growth, there was a decline, which may also be associated with the spread of the "coronavirus" and its new strains, against which existing vaccines show much less effectiveness. Thus, in the coming months, the US economy may begin to slow down in its recovery. If so, there will be much less reason for the Fed to start curtailing incentives than now or a couple of weeks ago. In general, at this time, everything will depend on how serious the Fed's monetary committee members are about tightening monetary policy. And this, in turn, will depend on inflation, which will be published on September 14. If we assume that the consumer price index will continue to accelerate in the US and reach 30-year highs, this will again create pressure on the Fed. However, if inflation starts to slow down, it will mean that Jerome Powell was right when he said that a strong price increase is a temporary phenomenon. Thus, this factor will put less and less pressure on the Fed. Monetary injections into the American economy can be maintained to continue to stimulate the labor market's recovery.

This week promises to be much more boring in macroeconomic terms than the previous one. However, several significant events are still planned. Let's go through them. The GDP indicator for the second quarter will be published today in the third assessment in the European Union. It is expected that the GDP value will not differ from the previous two estimates and will be 2.0% y/y. Therefore, there is no reason to assume that the markets will react strongly to this report. On Wednesday, the calendar of events in the European Union is empty. On Thursday, the results of the next ECB meeting will be summed up, which have recently turned out to be highly boring and "passing." The key rate will not be changed. The PEPP program is planned until the end of March 2022, and, given the low pace of recovery of the European economy, it is unlikely to be completed earlier than this date. So, by and large, all the attention is on the performance of Christine Lagarde, who has not performed in public for a very long time. We haven't heard her for more than a month, although she usually performs consistently once a week. All her recent comments indicated that the European economy is still far from full recovery, so now there can be no question of an early curtailment of the PEPP program, a reduction in its volumes, or an increase in rates. Thus, the rhetoric of the ECB and Christine Lagarde personally remains "ultra-deep," and the only question that the markets will have to answer this Thursday is whether Lagarde's rhetoric will not increase at least a little? The euro may gain an additional advantage over the dollar if this happens, although there are no prerequisites for this. Christine Lagarde is also scheduled to speak in the European Union on Friday. Thus, the last two days of the working week will be marked by these events.

All the macroeconomic statistics of the week for the United States will be discussed in the article on the pound/dollar. It should also be noted here that the main thing now is not even the direction the euro/dollar pair is moving. The main thing now is the speed at which the movement continues. We have repeatedly stated that if the pair continues to pass from a minimum to a maximum of 30 to 50 points per day, then intraday trading and earning will not work. It will be necessary to increase the timing of each transaction significantly. 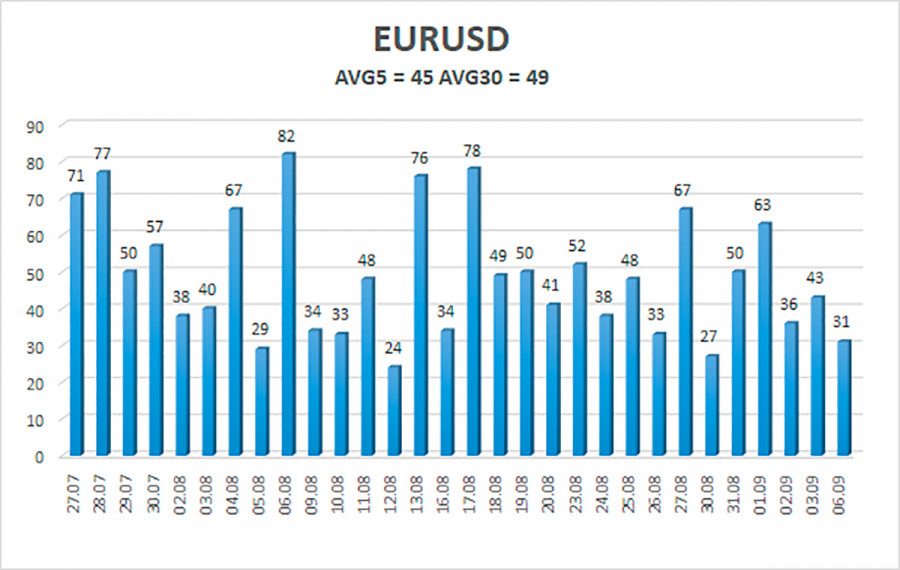 The volatility of the euro/dollar currency pair as of September 7 is 45 points and is characterized as "low." Thus, we expect the pair to move today between the levels of 1.1823 and 1.1913. The upward reversal of the Heiken Ashi indicator signals a possible resumption of the upward movement.

The EUR/USD pair has started to adjust. Thus, today, we should consider new long positions with targets of 1.1902 and 1.1913 after the reversal of the Heiken Ashi indicator up. Sales of the pair will be possible if the pair is fixed back below the moving average line with targets of 1.1810 and 1.1780, and they should be kept open until the Heiken Ashi indicator turns up.