Overview of the EUR/USD pair. September 9. Inflation in the US is the last frontier before the Fed meeting. 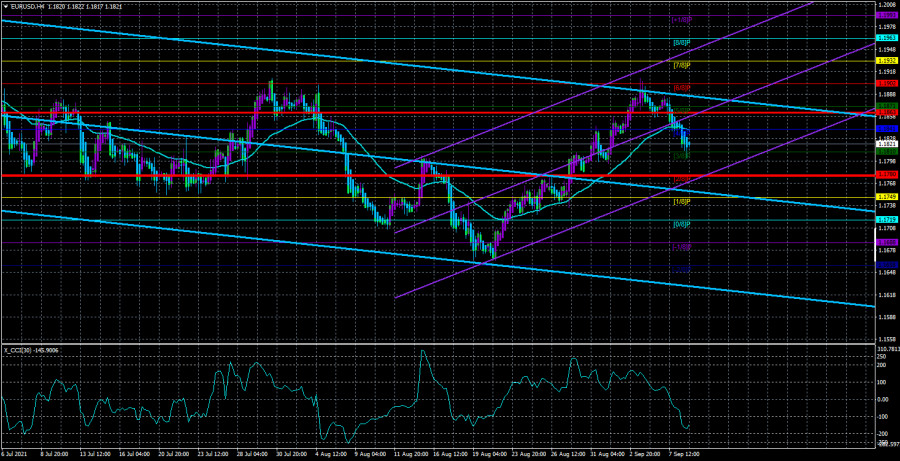 The EUR/USD currency pair continued its downward movement on Wednesday and consolidated at the end of the day below the moving average line on the 4-hour timeframe. Thus, at this time, we are talking about changing the trend to a downward one. It is noteworthy that the pair's quotes failed to overcome the Murray level of "6/8"-1.1902, near which the pair's trip to the north also ended last time. Thus, we can conclude that traders saved before the last local maximum. However, this does not mean that the pair will now rush down. Recall that almost all global fundamental and technical factors now speak in favor of the fall of the dollar. First, there is still an upward trend on the 24-hour timeframe, which has lasted for more than a year and a half. And over the past almost nine months, the pair has managed to adjust by a third against this trend. Thus, it is still impossible to conclude that this trend is over. Second, the Fed's monetary policy remains unchanged. Accordingly, hundreds of billions of dollars continue to flow into the US economy, inflating the money supply, provoking inflation, and inflating "bubbles" in the stock and cryptocurrency markets, as well as in the real estate market. Accordingly, sooner or later, these "bubbles" will burst, as always happens. Third, local factors also do not support the US currency. Jerome Powell made it clear that the regulator will not rush to "tapering" (curtailing the QE program). The latest report on Nonfarm Payrolls showed that the labor market recovery is slowing down.

Along with it, due to the increase in cases of "coronavirus," the economic recovery may also slow down. Thus, the probability that Powell will not announce the curtailment of QE at the September meeting is now approximately 70%. Therefore, there will be no tightening of monetary policy. Thus, the US dollar has no good reasons to become more expensive in the medium term. Therefore, based on all the above, we expect the euro/dollar pair to move north. Unfortunately, volatility has been almost "at zero," so the pair is moving very weakly. But there is no flat at the same time. Nevertheless, it can take two weeks to overcome 150-200 points in the trend nature of the movement.

In principle, before the Fed meeting, which will be held on September 22, only one important report can affect the decisions that the regulator will make. It is an inflation report. And here everything is not as clear as we would like. Recall that the growth of inflation itself is a negative phenomenon for any economy and any currency. Therefore, an increase in the consumer price index usually provokes a fall in the currency exchange rate. However, in the case of the US dollar in the last six months, everything was the opposite. The US currency showed growth almost every time it became known about the acceleration of inflation. Such a market reaction could only be due to the fact that with the acceleration of inflation, the probability of an announcement about the curtailment of the Fed's QE program also increased. However, in July, inflation did not accelerate in relation to June. And in August, it may even decrease altogether. Thus, Jerome Powell may be right, as he said earlier that the increase in inflation is a temporary phenomenon caused by the low "base" of last year and the increase in energy prices. The same theses were voiced by the heads of the ECB and the Bank of England. However, if inflation starts to slow down, along with this, the probability of an early curtailment of the quantitative stimulus program will begin to decrease. Therefore, inflation is below 5.4% y/y at the end of August, and weak Nonfarm almost guaranteed postponement of the announcement of the start of "tapering" to November or December. In turn, this will mean a few more months of being in the risk zone for the US currency.

Thus, we believe that finding the price below the moving average will not be long. Most likely, the pair will return above the moving average line in the next few days. Although, given the current volatility indicators, it may take a whole week for a banal round of corrective movement. However, we do not expect a strong decline in the pair's quotes, but we still remind you that no one can predict the pair's movement by 100%. Therefore, you should trade for an increase only when the price is above the moving average. The lower linear regression channel has already turned up, which is the first serious step towards forming a strong upward trend. 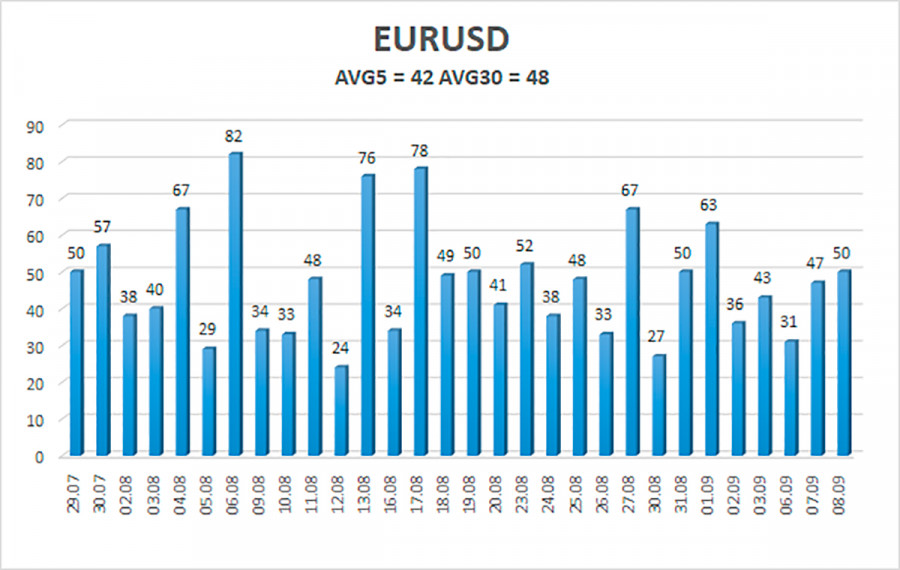 The volatility of the euro/dollar currency pair as of September 9 is 42 points and is characterized as "low." Thus, we expect the pair to move today between the levels of 1.1779 and 1.1863. The upward reversal of the Heiken Ashi indicator signals a possible resumption of the upward movement.

The EUR/USD pair continues to adjust. Thus, today, we should consider new long positions with targets of 1.1871 and 1.1902 in case the price is fixed back above the moving average. The pair's sales should have been opened when the pair was fixed below the moving average line, with targets of 1.1810 and 1.1800. The new targets are 1.1780 and 1.1749. They should be kept open until the Heiken Ashi indicator turns up.

Interesting? Write a comment below.
 Overview of the EUR/USD pair. September 9. Inflation in the US is the last frontier before the Fed meeting.
Forward 
Backward 