Overview of the GBP/USD pair. September 10. The Fed members did not return the "bearish" mood to the market. 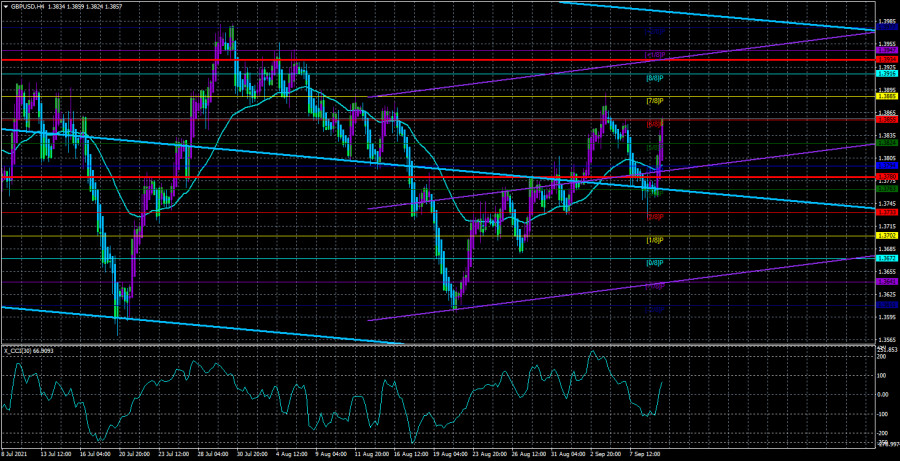 On Thursday, the British pound paired with the US dollar sharply and quite unexpectedly soared up. Just yesterday, we said that we expect the resumption of the upward movement for the pound/dollar pair. Now, of course, it is still too early to conclude the resumption of the upward trend. However, at the moment, the pair has recouped most of the losses in the last few days. The most interesting thing is that there were no good reasons for the sharp growth of the British currency. In the UK, no speeches or important publications were scheduled for yesterday. The head of the Bank of England, Andrew Bailey, and his colleagues, who spoke at the Treasury with a report on the work done, said that only the minimum conditions for tightening monetary policy had been achieved. However, this does not mean that at the next meeting of the regulator, it will decide on curtailing the incentive program or raising the rate. And in any case, it was on Tuesday, when the pound was falling with might and main. But why it rose sharply yesterday is a big question. Although, on closer examination and detailed study – it is not so big. We have already focused the attention of traders several times that most of the fundamental and technical factors now speak in favor of a further fall in the US currency. It is in favor of the fall of the dollar and not the growth of the pound. The British currency now has no more reasons to grow than the US currency. However, the Fed's actions to inject hundreds of billions of dollars into its economy cover all other factors that could affect the movement of the pound/dollar pair. Thus, we expect that the decline of the US currency will continue in the long term even if the Fed announces the curtailment of the QE program soon. However, so far, there are quite a lot of rumors around each central bank, and all of them relate only to economic stimulus programs and the timing of their possible completion. And in fact, neither the BA nor the Fed has received any concrete signals about their readiness to start reducing injections into the economy. Thus, the general situation does not change.

However, representatives of the Fed speak much more often than representatives of the Bank of England. Thus, there are much more expectations from the American regulator. The Fed is always expected to do more since it is the largest central bank in the world. The central bank of the country with the largest economy. Therefore, all the attention of the markets is focused on the Fed.

Moreover, the chairman of the St. Louis Fed, James Bullard, again shifted the markets' expectations towards tightening. Recall that recently, many market participants and experts have serious doubts that the Fed will announce a reduction in incentives in September. And there are doubts that now is the right time to reduce cash injections into the economy. However, James Bullard's comments once again led the markets to believe that the Fed may announce a reduction in the volume of the QE program as early as September. Bullard said it is necessary to start tapering this year, and there are many more vacancies in the labor market than unemployed people. Therefore, the weak Nonfarm Payrolls report for August cannot be the reason for refusing to wind down the incentive program. A similar opinion is shared by the Federal Reserve Bank of New York chairman, John Williams. In his opinion, the target level for inflation has been reached, and the US economy continues to move towards full recovery. Labor market reports are alternating, strong and weak, but most importantly, there is an "accumulation of employment." There is a constant increase in the number of employees. Thus, if this process continues, John Williams will be ready to vote for tapering in 2021. So now there is only one question. When will the Fed announce the start of this process? With the most optimistic option already in September, with a pessimistic one – in December. Thus, the next meeting of the Fed takes on a special meaning and degree of significance. However, we would still like to remind traders that the Fed's monetary committee will make the decision, and it is hardly possible to predict its actions with absolute certainty. Therefore, it is better not to guess but to wait for the announcement of the meeting results and only then draw conclusions and build a further trading strategy. We believe that if the curtailment of QE is announced, the dollar will receive support, but only local. 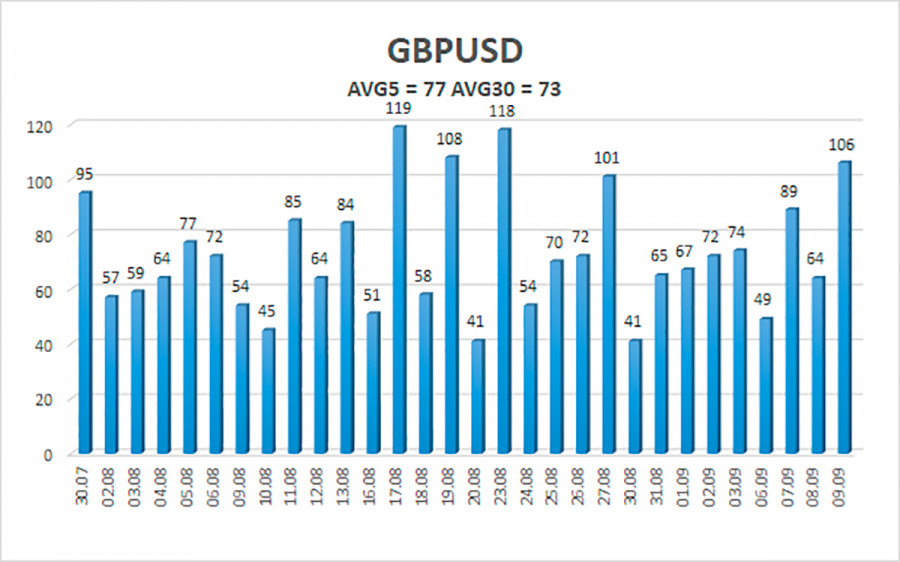 The average volatility of the GBP/USD pair is currently 77 points per day. For the pound/dollar pair, this value is "average." On Friday, September 10, we expect movement inside the channel, limited by the levels of 1.3780 and 1.3934. The reversal of the Heiken Ashi indicator downwards signals a round of corrective movement.

Interesting? Write a comment below.
 Overview of the GBP/USD pair. September 10. The Fed members did not return the "bearish" mood to the market.
Forward 
Backward 