Overview of the GBP/USD pair. September 14. A week full of macroeconomic statistics.

The British pound paired with the US dollar on Monday managed to stay above the moving average line. Therefore, unlike the euro/dollar pair, the pound/dollar pair remains in an upward trend and retains excellent chances of growth above the Murray level of "7/8" - 1.3885. Thus, in the near future, the pair's quotes may return to the level of 1.3885 and try to overcome them on the third attempt. The euro/dollar and pound/dollar pairs are practically not correlated now. And at such moments, you should find out and understand why this is happening? Factors that are related to the European Union or the United Kingdom are involved in the case. Because if they were "off," then both main pairs would move about the same way. However, no. The pound now continues to grow as a whole, and the euro has been declining for several days.

Given that no important events have occurred in the UK in the last few weeks, everything can only be connected with the European Union, or rather with the ECB. The meeting last Thursday made it clear to traders that the ECB is not even thinking about curtailing the quantitative stimulus program in the near future. Despite the "slippery" rhetoric of Christine Lagarde, who announced a decrease in PEPP volumes in the next two quarters. However, the ECB is still not ready to cancel the stimulus. Therefore, it is the European currency that can now be under market pressure. And in the UK, everything is quiet and calm. The last BA meeting was held on August 5, and the next one will be held on September 23. At the same time, forecasts already indicate that no changes in monetary policy or the rhetoric of the monetary committee members will follow in the UK. However, this is not yet known for certain, and it is known in the EU. Thus, the pound now reacts mainly to events and news from the States. And the issue of monetary policy and the QE program is in limbo. In general, both pairs continue to be in a limited range after the segments of the global upward trend ended earlier this year.

What can we expect for the pound/dollar pair this week? This morning, reports on unemployment, the number of applications for unemployment benefits, and average wages will be published in Britain. On Wednesday, a report on inflation for August will be released, which may accelerate (judging by forecasts) from 2.0% y/y to 2.9% y/y. Friday – retail sales for August. In principle, all the British reports are quite important. However, not everything can be followed by a reaction of the markets. For example, data on unemployment and retail sales will be ignored with a high probability. Now the USA.

Already today, on Tuesday, inflation data for August will be published. Recall that this report is very important in the context of changes in the Fed's monetary policy. If inflation continues to rise (it is currently at a 13-year high of 5.4% y/y), this will mean that the regulator will need to take measures to contain it as soon as possible. That is, to tighten monetary policy. That is, to start curtailing quantitative stimulation. If inflation starts to slow down (according to forecasts, a decline from 5.4% to 5.3%), this will mean that the Fed can monitor the situation for some time (for example, until November or December) so as not to make hasty decisions. On Wednesday, the States will publish not the most significant report on industrial production.

Moreover, on Thursday - a report on retail sales and applications for unemployment benefits. On Friday, the consumer sentiment index from the University of Michigan. Thus, in general, this week, there will be quite a lot of important reports for the euro, for the pound sterling, and the US currency. The only question is, which reports will eventually be worked out by the markets, and with what force? Recall that, for example, the euro/dollar pair has been passing a maximum of 50 points per day in recent months. The average volatility is 40 points. The average volatility over the past 30 trading days has decreased to 73 points for the pound sterling. Thus, it is unlikely that any traders will be happy if the US inflation report is followed by a movement of any pair equal to 20 points. 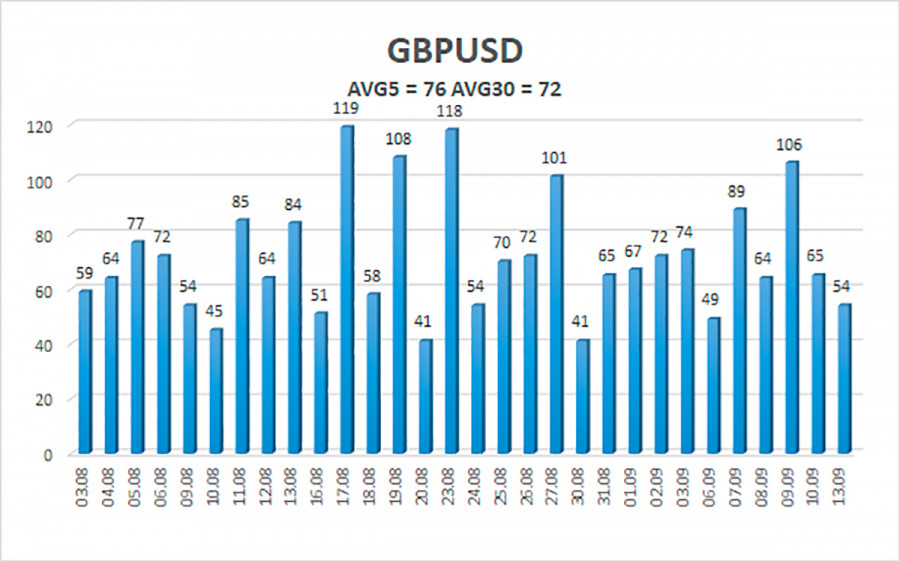 The average volatility of the GBP/USD pair is currently 76 points per day. For the pound/dollar pair, this value is "average." On Tuesday, September 14, we expect movement inside the channel, limited by the levels of 1.3758 and 1.3910. A reversal of the Heiken Ashi indicator downwards signals a possible continuation of the corrective movement.