The British pound paired with the US dollar on Tuesday also traded higher in the first half of the day. The upward movement began in the early morning when employment and wages were published in the UK. And in the second half of the day, the growth of the British currency continued against the background of the report on American inflation. However, by the end of the day, an unjustified collapse of 100 points followed, which spoiled everything. However, we will talk about the "foundation" a little lower, and now I want to remind you that we continue to support the scenario with the growth of the British currency since we believe that the absolute majority of factors continue to speak in favor of the fall of the dollar. In the article on the euro/dollar, we reminded you exactly what these factors are. We recommend that you read them. In the meantime, it should be noted that the pound/dollar pair is mainly moving under the influence of the Fed and all the expectations associated with this organization. Recall that there has been constant talk on the market about when to expect the program to be curtailed in the last couple of months. The logic is simple. If the Fed announces the curtailment of QE, albeit gradually, then the dollar turns out to be a real fundamental background for strengthening. If the Fed is dragging its feet with this decision or macroeconomic indicators do not allow it to be taken, the dollar continues to fall in price. Moreover, even if the curtailment of QE is announced in the first months, or even for a whole year, hundreds of billions of dollars will still flow into the American economy. Therefore, the essence of the matter does not change from this.

However, the UK also has its fundamental background, which, however, is still purely informative. The head of the Scottish National Party, Nicola Sturgeon, said on Monday that she hopes that the British government will choose the path of joint and fruitful cooperation on the issue of the region's independence. It was stated at the conference of the SNP. "My approach to management and politics is based on cooperation, not on confrontation. That is why I hope that the Scottish and UK governments will reach an agreement, as we did in 2014, and make sure that the democratic wishes of the Scottish people are heard. It is absolutely obvious - democracy must prevail!" Nicola Sturgeon said in a statement. "The UK is a voluntary union of countries. Until recently, no one questioned the right of the people of Scotland to choose whether they wanted to become independent or not. It is not in the power of the British Parliament, where only six SNP deputies are represented, to determine the future of our country without the consent of the people who live here," Sturgeon said. The head of the Scottish state also believes that cooperation between London and Edinburgh will only become stronger if Scotland leaves Britain since it will now be about an equal and full-fledged partnership. Nicola Sturgeon also repeated that she is going to hold a referendum before the end of 2023. That is, she has 15 months left for everything about everything. Thus, within just a year, the UK may face a new serious problem. If Scotland leaves the Kingdom, it means the loss of 5.5 million citizens and a third of the territory. Recall that the majority of Scots voted to retain EU membership in 2016. Therefore, it is likely that they now want to leave the UK to return to the EU on the one hand. But at the same time, it is very important to believe that Scotland will be able to return to the EU without the UK and that Scotland will live well outside the Kingdom. And here, many experts and sociologists are far from sure that the choice of Scots will be unambiguous. Let's start with the fact that in such referendums, there is rarely a unanimous decision. Take the same Brexit, where only 52% of Britons voted "for" the exit. The situation is about the same now in Scotland, where about half of the population wants a referendum, and the second half does not. Half of them want to leave the Kingdom, and the other half is thinking about it. That is, there will not be a unanimous decision. And since we are talking again about the ratio of 50/50 or so, the pendulum of the scales can tilt to either side. In 2014, only 55% of Scots voted "for" remaining in the UK. That is, even when there was no Brexit, the opinions of Scots were almost equally divided. 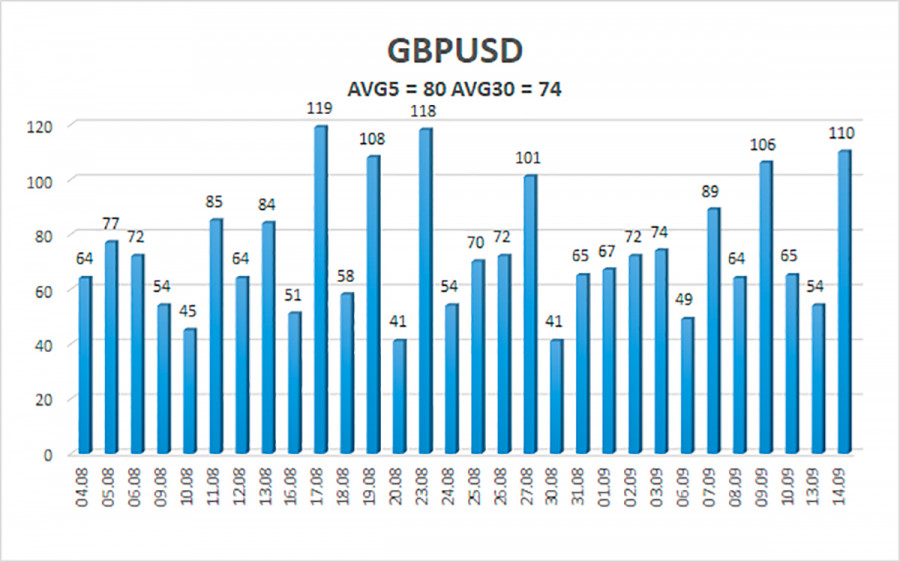 The average volatility of the GBP/USD pair is currently 80 points per day. For the pound/dollar pair, this value is "average." On Wednesday, September 15, we expect movement inside the channel, limited by the levels of 1.3724 and 1.3884. The upward reversal of the Heiken Ashi indicator signals a possible resumption of the upward movement.

The GBP/USD pair is fixed below the moving average line on the 4-hour timeframe. Thus, it is necessary to open short positions with the targets of 1.3763 and 1.3733. Keep the shorts open until the Heiken Ashi indicator turns up. Buy orders should be considered again if the price is fixed above the moving average line with targets of 1.3855 and 1.384 and keep them open until the Heiken Ashi turns down.