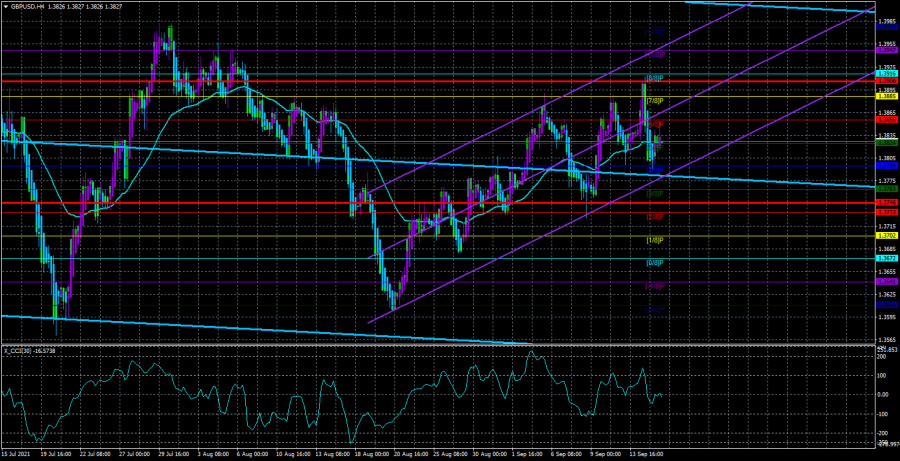 The British pound paired with the US dollar on Wednesday "departed" from the events of Tuesday. Nothing extraordinary happened on Tuesday. Quite important macroeconomic reports were published in the UK and the United States. However, it was not the reports themselves that were interesting, but the markets' reaction to them. At first glance, everything is logical, and after the strong British statistics, the pound showed growth. After the weak US statistics, the US dollar showed a drop. In total, the pair grew for most of the day. But about two hours after the publication of the US inflation report, the pair suddenly began to fall, which in the end turned out to be stronger than all the previous growth, which was based on specific data. As a result, the pair was even below the moving average line, and all Wednesday, it tried to return above it. Although the movements on Tuesday were strange, the upward trend persists at this time. The situation is approximately the same for the euro. Thus, both major pairs retain good chances for continued growth, which we are waiting for. On Wednesday, another rather important report was published in the UK (on inflation for August), which showed its acceleration immediately to 3.2% y/y. At the same time, forecasts indicated an increase to a maximum of 2.9% y/y. The markets reacted very weakly to this report – the pound rose by about 30 points. Thus, since the statistics in the UK turned out to be strong, and the latest reports in the US were weak, we have the right to expect further growth of the pair's quotes.

Moreover, nothing changes in the fundamental global plan either, which means that the growth of the British currency remains preferable. Recall that the pair have managed to adjust by only 600 points over the past six months against a trend of 2,800 points. It is even less than the classic 23.6% Fibonacci correction.

Meanwhile, a conflict based on the "Northern Ireland Protocol" may escalate between London and Brussels in the near future. Recall that London considers this protocol "ineffective" and requires the European Union to revise it completely. The European Union refuses since the protocol is part of the Brexit agreement and is not subject to revision at the request of one of the parties. However, yesterday, it became known that one of the senior officials who work with Brexit issues threatened the European Commission with a unilateral withdrawal from the "Northern Ireland protocol" if Brussels does not agree to review it. According to David Frost, the European Union should respect Britain's desire to revise the protocol if it wants to keep it at all. "I urge the European Union to take this seriously. We are ready to invoke Article 16 if this is our only way out of this situation. If we want to avoid such a scenario, we need negotiations," Frost said. This Article 16 allows a party to suspend certain provisions of the "Northern Ireland Protocol" if they "create serious problems." But from the point of view of the President of the European Commission, Maros Sefcovic, new negotiations will only complicate the situation. Not so long ago, the Democratic Unionist Party announced that it was ready to stop working in the Parliament of Northern Ireland if significant changes were not made to the protocol. Thus, a new conflict may break out between the parties in the near future, which may end in Court. Earlier, the EU has repeatedly warned London that any violation of the already signed Brexit agreement will have serious legal consequences.

Thus, the problems of Scotland and Northern Ireland remain key for the UK. In the first case, we are talking about the loss of an entire region, in the second – about a possible conflict on the island of Ireland and a conflict with the European Union, which remains an important trading and strategic partner of Britain. However, recently, more and more reports have been coming from the UK about the problems caused by Brexit. We have already talked about the serious shortage of truck drivers, because of which many supply chains were disrupted, and there were fewer goods on store shelves and a shortage formed. Yesterday, the Federation of Food and Beverage Producers announced that the export of these products to the EU countries has halved in 2021. Thus, the pound continues to hold high only thanks to the Fed's monetary policy. 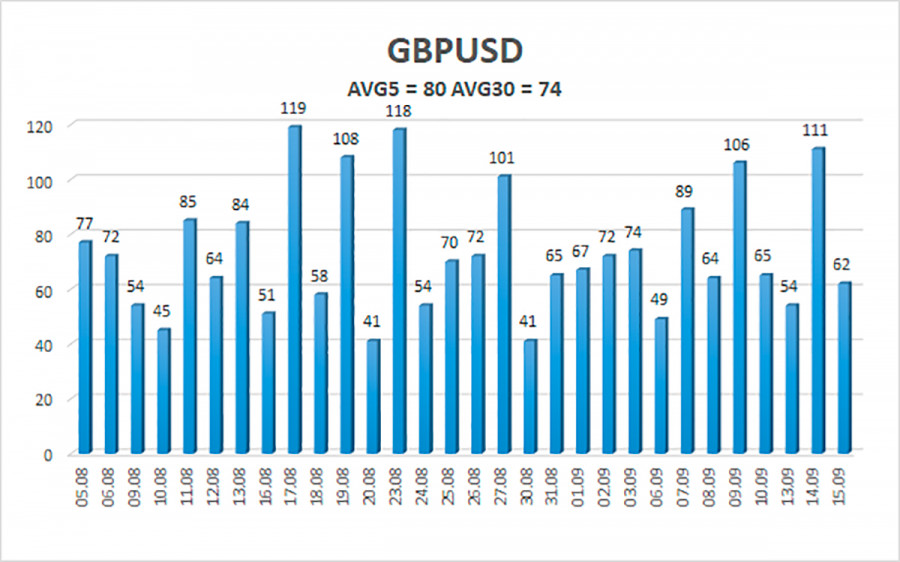 The average volatility of the GBP/USD pair is currently 80 points per day. For the pound/dollar pair, this value is "average." On Thursday, September 16, we expect movement inside the channel, limited by the levels of 1.3746 and 1.3906. A reversal of the Heiken Ashi indicator downwards signals a possible continuation of the downward movement.

The GBP/USD pair has been fixed below the moving average line on the 4-hour timeframe. Thus, it is necessary to open short positions with the targets of 1.3763 and 1.3746 after the reversal of the Heiken Ashi indicator down. Buy orders should be considered again if the price is fixed above the moving average line with targets of 1.3855 and 1.3885 and keep them open until the Heiken Ashi turns down.