Overview of the GBP/USD pair. September 21. The pound is waiting for two meetings of central banks at once. 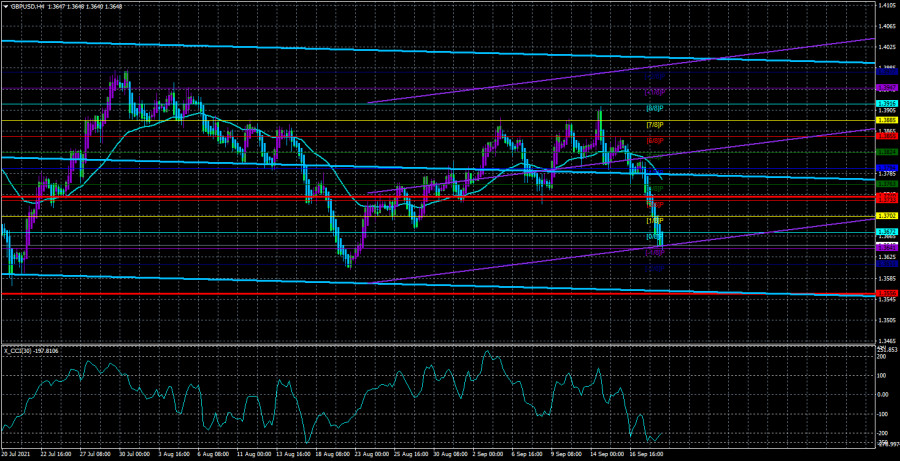 The British pound paired with the US dollar on Monday also continued to fall, which began last week. Almost out of the blue, the quotes of the British currency fell by 100 points. And this is on Monday, when the price usually stands in one place, especially if there are no fundamental events and macroeconomic publications. And yesterday, there were no such people. However, as we have already said in the article on the euro/dollar, at this time, only one event is important for market participants. This event is a meeting of the Federal Reserve, at which a high probability will be announced about the curtailment of QE. The technical picture of the pound/dollar pair is now very similar to the picture of the euro/dollar. The pound also fell again to the area we called the target for the second round of the global correction against the upward trend. This area is 1.3600-1.3666. Thus, an upward reversal and a new round of upward movement are very likely for the pound. However, everything will now depend on the events on Wednesday and Thursday. Because on Thursday, there will be a meeting of the Bank of England. And this event is also of great importance for the pound/dollar pair, as is the Fed meeting. Thus, two important meetings of central banks will be held this week at once. It is quite possible to expect that the volatility will be quite high. If the price on Monday calmly passed 100 points, then the movement may be much stronger on Wednesday or Thursday.

From a technical point of view, there is currently a downward trend. The price is below the moving average line, but none of the linear regression channels is directed down. More precisely, the older channel has a minimal downward slope, but at the same time, it turns up, and the younger one has been directed upwards for a long time. As in the case of the euro, an upward reversal may occur near the level of 1.3600. And this can happen even if the Fed does announce a gradual curtailment of QE. The pound has fallen by 260 points over the past four days, so we can assume that any decision of the Fed on the QE program has already been worked out. It means that a reverse upward movement of the pair is not excluded on Wednesday.

Now, as for the meeting of the Bank of England. Recall that there have also been rumors about a possible reduction in the economic stimulus program around the British regulator for a long time. At the last two or three meetings, even one member of the monetary committee regularly voted for reducing the QE program. But for now, it remains in proud solitude since there are only nine monetary committee members. The Bank of England is now expected to do the same as the Fed. However, we recall that a year ago, the Bank of England actively promoted the idea of reducing the key rate in the negative area. And six months ago, there was talk that the BA could overtake even the Fed and be the first to raise the key rate. Therefore, we can conclude that there are much more rumors around the BA than around the Fed, and there is much less reliable information. We believe that the British regulator will neither curtail the QE program in September nor even raise the rate earlier than the Fed. Unlike Fed officials, the BA Monetary Committee representatives did not make any comments that they were preparing to vote "for" curtailing QE. Therefore, we believe that nothing concrete can be expected from BA at all now. Nevertheless, it is hardly necessary to deny that an important decision may be announced on Thursday or some loud statement may be made.

In addition to the Fed and BA meetings, data on business activity in various sectors of the economy will be published in the UK this week. On Friday, September 24, BA representative Silvana Tenreyro will make a speech. However, these are all interesting events for this week. Thus, all the markets' attention will be focused on the two meetings of the central banks.

What can we say about the result? This week promises to be very important. However, the markets' reaction to the meetings of the Fed and the BA may be ambiguous. Usually, one or another currency does not start moving in the preferred direction 4-5 days before the most important event that the markets are waiting for. Now the dollar has been growing for several days in a row, not yet knowing what decisions will be made. Plus, both major pairs are located near the levels at which an upward turn is very likely. All this should be taken into account. 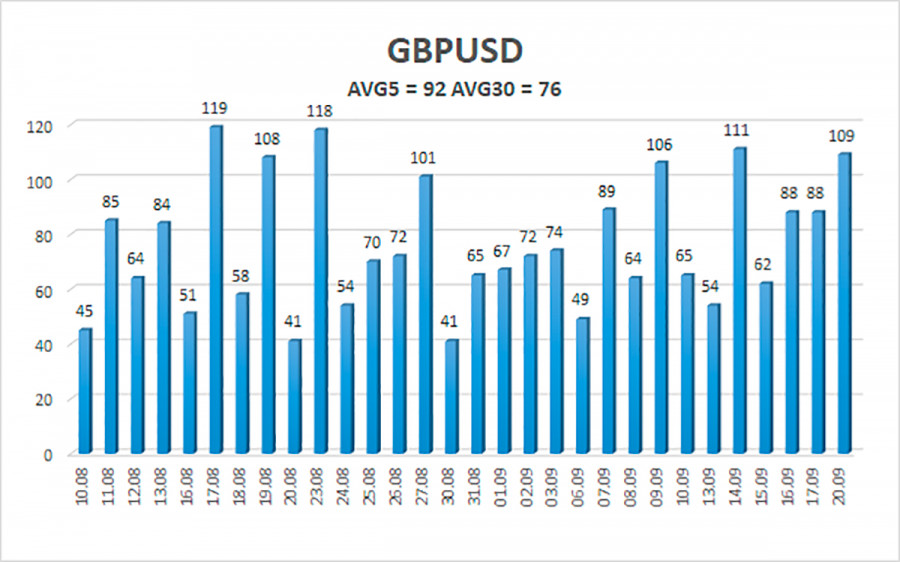 The average volatility of the GBP/USD pair is currently 92 points per day. For the pound/dollar pair, this value is "average." On Tuesday, September 21, we expect movement inside the channel, limited by the levels of 1.3556 and 1.3740. The upward reversal of the Heiken Ashi indicator signals a round of corrective movement.

The GBP/USD pair continues a strong downward movement on the 4-hour timeframe. Thus, it would be best if you stayed in short positions with the targets of the levels of 1.3611 and 1.3556 until the Heiken Ashi indicator turns up. Buy orders should be considered again if the price is fixed above the moving average line with targets of 1.3824 and 1.3855 and keep them open until the Heiken Ashi turns down.

Interesting? Write a comment below.
 Overview of the GBP/USD pair. September 21. The pound is waiting for two meetings of central banks at once.
Forward 
Backward 