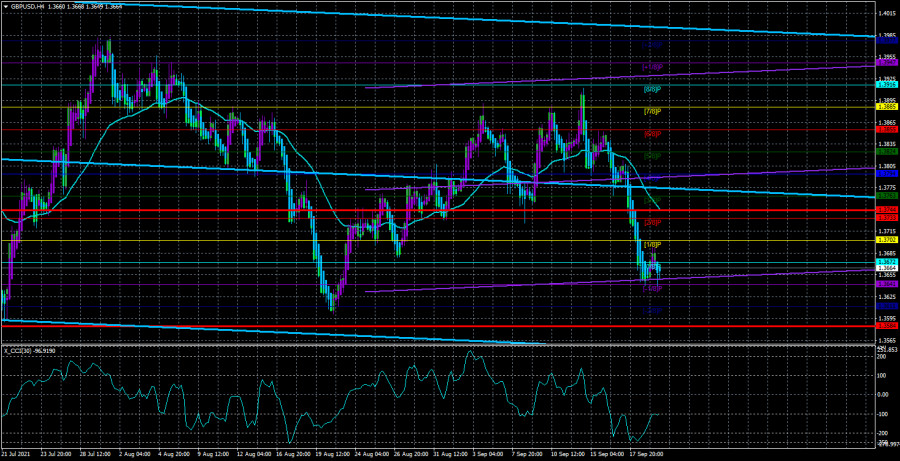 The British pound paired with the US dollar on Tuesday began to adjust after falling for several days. In principle, the dynamics of the euro/dollar and pound/dollar pairs have been very similar to each other recently. The only difference is that the euro/dollar pair "calmed down" this week, and the pound/dollar pair did not. Over the past three trading days, the British currency has fallen by 180 points. It is not very much for the pound/dollar pair, but this is a decent distance against the background of the decline in volatility in recent months. On Tuesday, a very weak correction began. In addition, the quotes of the British currency are now also near the lower border of the side channel, in which the pair has been trading for more than six months. For the GBP/USD pair, this channel is 1.3600 – 1.4200. The same 600 points as for the euro/dollar pair. Thus, although there is no flat in the long-term plan for the pound/dollar pair, the price is still in the side channel. And, accordingly, overcoming the lower limit of this channel will be of great importance for the prospects of the pair. Now everything looks as if the bears will be able to overcome the level of 1.3600. On the 24-hour timeframe, it is visible that each subsequent rebound from the level of 1.3600 led to a smaller pullback up than the previous one. It indicates that the bears continue to exert pressure, which sooner or later may lead to a breakthrough of an important level. However, we also remind you that the pound/dollar pair has managed to correct by only 600 points over the past six months, which is less than 23.6% of the Fibonacci correction from the entire upward trend. In addition, we remind you about the latest COT report, which showed a sharp change in the mood of professional players who closed 15 thousand contracts for sale and opened 15 thousand contracts for purchase in a week. From our point of view, all this speaks in favor of the resumption of the global upward trend. But do not forget that the meeting of the Fed will be followed by a meeting of the Bank of England, which is no less important. And no one expects "hawkish" rhetoric from BA.

In addition to the fact that it will be extremely difficult for the pound to show growth against the background of the Bank of England meeting, another not very unpleasant news for the British currency was received yesterday. The Speaker of the US House of Representatives, Nancy Pelosi, said that there would be no trade agreement between the UK and her country if London fails to resolve all its differences with the European Union over the Brexit deal. Nancy Pelosi said that any differences between Brussels and London could harm Northern Ireland and its people. In addition, there is a clear agreement between the EU and Britain on Brexit and, in particular, on the "Northern Ireland Protocol." Therefore, London's desire to completely revise this protocol is not legitimate, and the European Union is not obliged to meet the British halfway. If London continues to violate certain provisions of the Brexit agreement, it will cast doubt on the country's international reputation, and in this case, many countries of the world will refuse any agreements with the Kingdom. Pelosi also said that the States are the guarantor of the interests of Northern Ireland, so the destruction of the Belfast Agreement from 1998 will put an end to the deal between Britain and the United States. Recall that the current US President Joe Biden has Irish roots and has repeatedly spoken out in defense and support of the people of Ireland and Northern Ireland. Therefore, any violations of the Belfast Agreement that may worsen the situation on the island of Ireland will also not contribute to the conclusion of a trade deal with the United States.

Thus, we have several global factors at once, which indicate a very likely further fall of the British currency, as well as several factors in favor of its growth in the coming days. Given that the Fed will meet today and the Bank of England will meet tomorrow, these two events can put all the questions to an end. Given the strong fall of the British currency in the last week, we also believe that the possible curtailment of the Fed's quantitative stimulus program is already embedded in the current exchange rate of the pair. Therefore, we are still inclined to the growth of the British currency. Nevertheless, it makes no sense to guess where the pair can move before such important events. 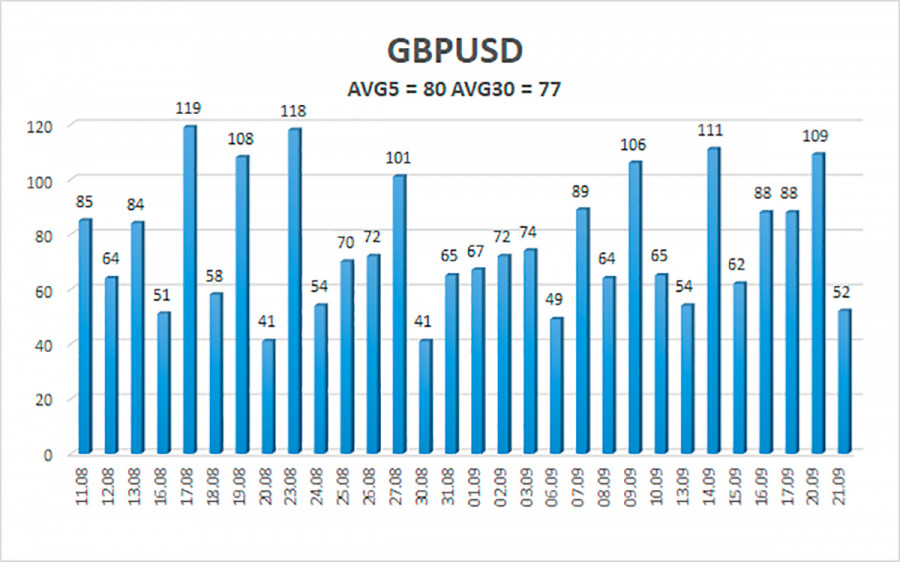 The average volatility of the GBP/USD pair is currently 80 points per day. For the pound/dollar pair, this value is "average." On Wednesday, September 22, we expect movement inside the channel, limited by the levels of 1.3584 and 1.3744. The reversal of the Heiken Ashi indicator downwards signals the resumption of the downward movement.

The GBP/USD pair has started a weak corrective movement on the 4-hour timeframe. Thus, it is necessary to open new sell orders with the targets of 1.3611 and 1.3584 after the reversal of the Heiken Ashi indicator down. Buy orders should be considered again if the price is fixed above the moving average line with targets of 1.3794 and 1.3824 and keep them open until the Heiken Ashi turns down.

Interesting? Write a comment below.
 Overview of the GBP/USD pair. September 22. Nancy Pelosi: There will be no trade agreement between the UK and the US.
Forward 
Backward 