Overview of the GBP/USD pair. September 23. Boris Johnson: it is unlikely that a trade deal between the UK and the US will 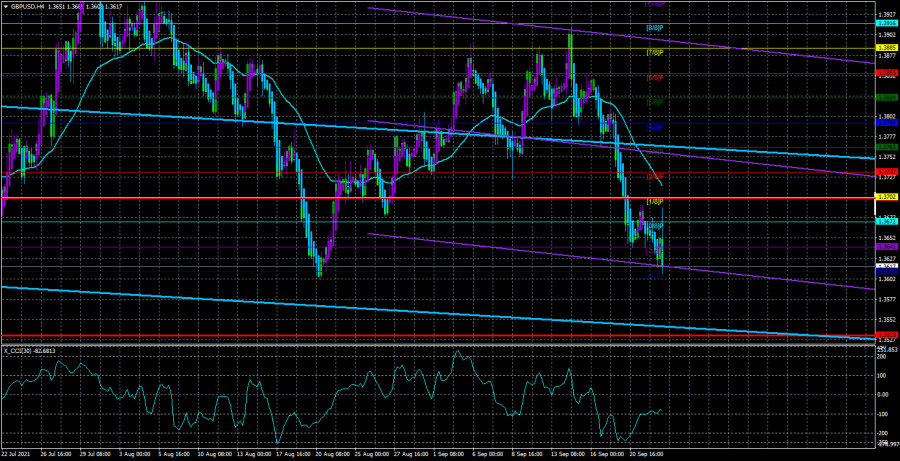 The British pound paired with the US dollar on Wednesday continued to fall, which began more than a week ago. It is very strange to see such a fall in the British currency, which had previously held firm against the US currency for nine months. It could not even adjust by more than 23.6%, according to Fibonacci, for such a long time if we count the entire upward trend as 100%. Nevertheless, it should be recognized that the next round of the fall of the British currency began on September 14 and continues to this day. For some time, the pound could fall due to high expectations of traders regarding the reduction of the Fed's QE program in September. However, for example, the European currency is not declining against the dollar this week. Thus, the reasons for the fall of the British currency should be sought in the UK and not in the US. In principle, there are not many options here. If we consider that the results of the Bank of England meeting will be announced this week (already today), and the probability of signing a trade agreement between the US and the UK in the coming years is melting before our eyes. As for the Bank of England, despite the "hawkish" attitude of the representatives of this bank from time to time, the markets do not believe that it will decide to reduce its stimulus program in the near future. Recall that at the last three meetings, only one monetary committee member voted to reduce the volume of asset purchases. Therefore, at this time, few people believe that the Bank of England will get ahead of the Fed on this issue. Perhaps this is why the pound is falling. At the same time, as mentioned above, the probability of concluding a trade deal between the UK and the US is rapidly decreasing.

This issue should be dealt with in more detail. This week, the Speaker of the House of Representatives, Nancy Pelosi, said that the UK, by its confrontation with the European Union, pushes back the moment of signing a trade agreement with the United States and even calls it into question. Pelosi said that the States are the guarantor of Northern Ireland's interests in the Brexit agreement, so London's refusal to fulfill all the terms of this agreement cannot contribute to the conclusion of a similar agreement with the States. Pelosi, and earlier Joe Biden, also made it clear that any unilateral violation of existing agreements with the EU will be regarded as the Kingdom's unwillingness to fulfill its obligations with honor and dignity. Therefore, what kind of agreement can we discuss with a country that does not fulfill its obligations? It should also be recalled that the government of Boris Johnson made a big bet on concluding a trade deal with the United States. However, at a time when the president of this country was still Donald Trump. Boris Johnson and Donald Trump have repeatedly called each other friends. Thus, London did not doubt that a trade deal would be concluded in the coming years and would partially compensate for the losses due to Brexit and the fall in trade turnover with the EU countries. However, almost a year has passed since Brexit was officially completed, and there is no information about negotiations with Washington.

Moreover, the other day Boris Johnson and Joe Biden held a meeting, during which they mainly discussed other issues, but the issue of a trade agreement was also touched upon. After this meeting, Johnson told reporters that "negotiations are moving as fast as possible," but at the same time refused to confirm that a deal is possible until 2024. Joe Biden himself said that the parties "devoted a little time to discussing the deal, but they still have a lot of work to do in this direction."

Thus, three factors are currently working against the British currency: a high probability of curtailing the QE program in the US before the end of the year, a low probability of reducing the asset purchase program before the end of the year in the UK, as well as a low probability of concluding a trade agreement between the US and Britain in the coming years. Here, of course, we can also add the high probability of holding a referendum on independence in Scotland before the end of 2023, which threatens the Kingdom with the loss of a third of its territory. It can also include the "Northern Ireland Protocol," which is bursting at the seams and the UK wants to abandon. However, considering all these factors and that the pound has fallen by 300 points over the past two weeks, the pound/dollar pair remains above the critical level of 1.3600, which we have repeatedly called the target for the next round of global correction. Thus, everything will be resolved in the near future. 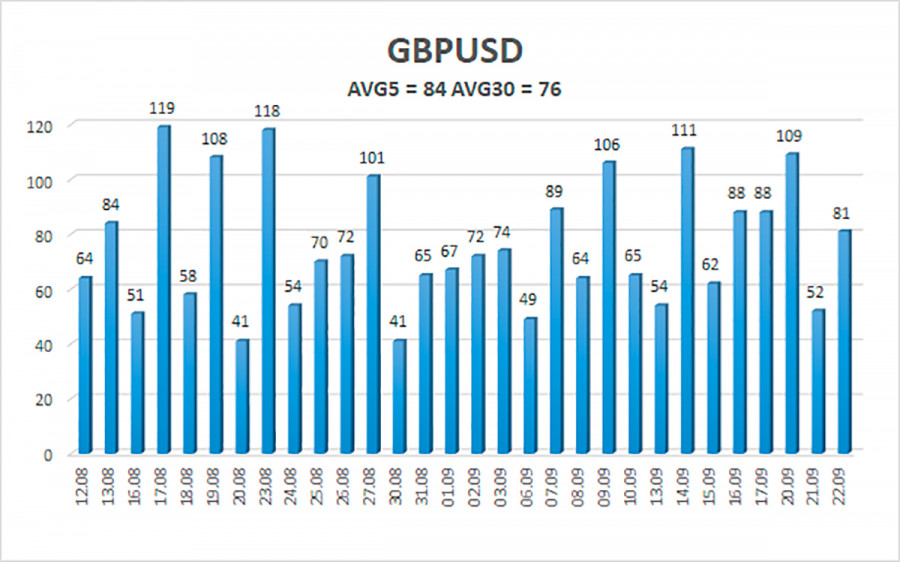 The average volatility of the GBP/USD pair is currently 84 points per day. For the pound/dollar pair, this value is "average." On Thursday, September 23, we expect movement inside the channel, limited by the levels of 1.3533 and 1.3701. The reversal of the Heiken Ashi indicator downwards signals the resumption of the downward movement.

The GBP/USD pair is trying to continue its downward movement on the 4-hour timeframe. Thus, it is necessary to open new sell orders with the targets of 1.3611 and 1.3533 after the reversal of the Heiken Ashi indicator down. Buy orders should be considered again if the price is fixed above the moving average line with targets of 1.3763 and 1.3794 and keep them open until the Heiken Ashi turns down.

Interesting? Write a comment below.
 Overview of the GBP/USD pair. September 23. Boris Johnson: it is unlikely that a trade deal between the UK and the US will
Forward 
Backward 