Overview of the GBP/USD pair. September 24. The pound received support against the background of the increased "hawkish" 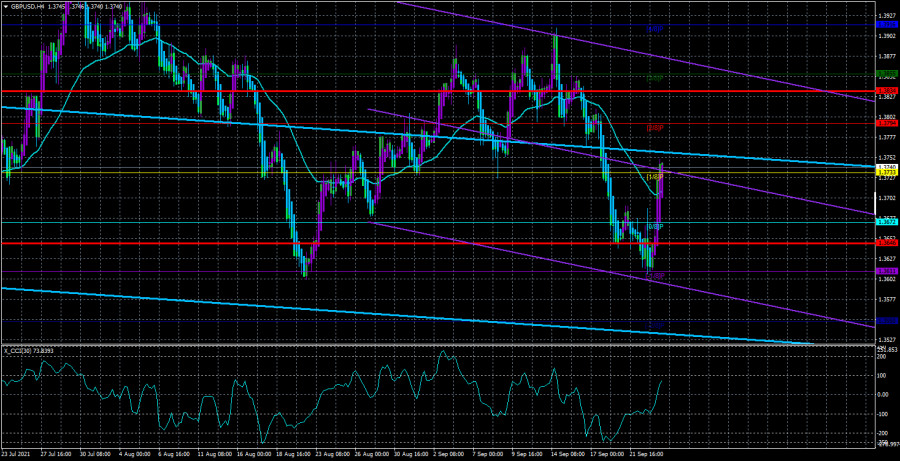 On Wednesday, the British pound paired with the US dollar continued a sluggish decline after the Fed announced the results of its meeting. As already mentioned in the EUR/USD article, the Fed has not made any special changes to its monetary policy. Therefore, it is impossible to talk about any "decisions taken" in principle. Nevertheless, the US dollar was still getting more expensive due to inertia for some time, and already on Thursday, it collapsed down. It should be noted that the fall of the US currency on Thursday began a few hours before another important event – the meeting of the Bank of England (more precisely, the announcement of its results). At the same time, the European currency was also becoming more expensive. Therefore, it can already be assumed that the European markets have not found any reason to buy the dollar since the Fed has not announced the beginning of curtailing the QE program. But the strongest growth of the British currency, which began a little later, is entirely due to the Bank of England. However, according to tradition, we will talk about the "foundation" a little below. In the meantime, we would like to note that the movement of the pound/dollar pair was logical on Wednesday and Thursday. In this section, we will focus on the "technique." And the "technique" is now very eloquent and can play a huge role in the prospects of the pound/dollar pair. As we have said more than once, the pound has a goal for the second round of correction against the global upward trend. And this goal is the level of 1.3600. If we switch to the 24-hour timeframe, it is visible that the price has fallen to this level three times and bounced off it three times in recent months. Each subsequent rebound was weaker than the previous one, which seems to give hope for the final overcoming of this level. However, there are no guarantees in the foreign exchange market. Thus, the third rebound from the level of 1.3600 may trigger the resumption of the upward trend, which we have been waiting for several months. The same picture as for the euro/dollar pair. Now there is a very high probability of a turn to the north. It is not necessary to work out this hypothesis without technical confirmation. However, it is still better to keep it in mind and expect such a scenario now, not when the trend will resume.

Now we turn to the consideration of the results of the meeting of the Bank of England. In principle, the situation here is the same as the Fed since the committee has not made any special changes to the monetary policy. The key rate remained at the level of 0.1%, and the volume of the asset purchase program was 895 billion pounds. However, there is still one difference, and some experts expected it. We are talking about the vote of the monetary committee on the issue of changing the volume of the economic stimulus program. At the last three meetings, one member of the committee has consistently voted in favor of reducing the volume of this program.

Moreover, interestingly, it was not the same functionary. Nevertheless, yesterday it became known that now two members of the board (Michael Saunders and Dave Ramsden) out of 9 support the curtailment of the QE program. Accordingly, we have a clear tendency to strengthen the "hawkish" mood among the members of the Bank of England. It should also be noted that Saunders and Ramsden proposed to reduce the volume of QE to 840 billion pounds. We believe that it is thanks to this factor that the pound rose in price yesterday.

In addition, the Bank of England revised its GDP forecasts for the third quarter. Now it is expected to grow by 2.1%, instead of +2.9%, which he announced in August. How can we not remember here that there is another "wave" of the "coronavirus" epidemic in the UK, which also slows down the economic recovery, as in the United States? The Bank of England also announced an increase in inflationary pressure and raised its inflation forecasts for the third and fourth quarters. But at the same time, the final communique said that if the economic recovery continues at a "good" pace, then a moderate tightening of monetary policy may be required. Naturally, we are talking about reducing the asset purchase program. It seems that the text of the final statement for the Fed and the Bank of England was written by one person. Of course, it is a joke. However, the rhetoric of the cover letters from both central banks is surprisingly similar.

Thus, now the pound/dollar pair on a 4-hour timeframe needs to gain a foothold above the moving average line, after which the trend will change to an upward one. After that, it will be possible to seriously talk about forming a new upward trend and purchases of the British currency. We also remind that the Fed will continue to pour at least $ 120 billion a month into its economy, which still works against the US dollar. 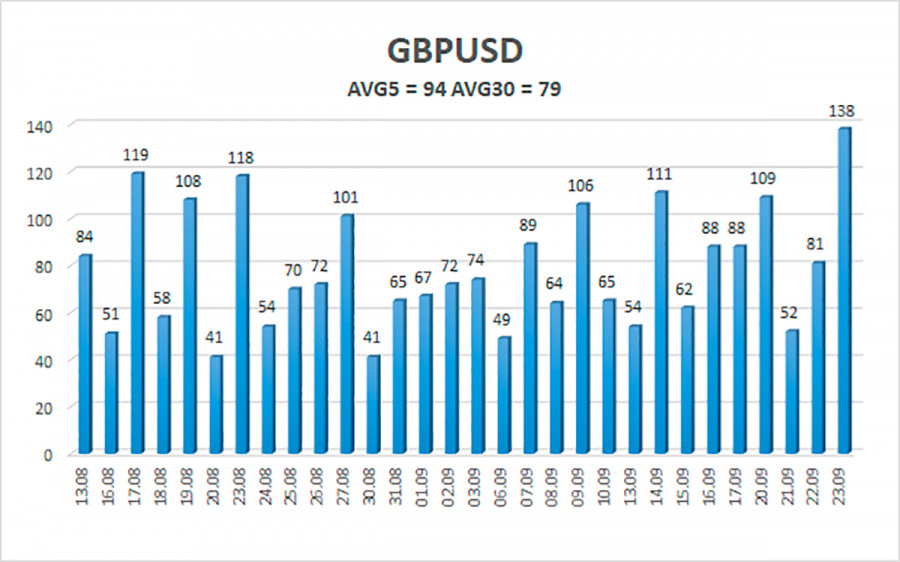 The average volatility of the GBP/USD pair is currently 94 points per day. For the pound/dollar pair, this value is "average." On Friday, September 24, we expect movement inside the channel, limited by the levels of 1.3646 and 1.3834. The reversal of the Heiken Ashi indicator downwards signals a possible turn of the corrective movement.

The GBP/USD pair has started a powerful upward movement on the 4-hour timeframe. Thus, at this time, you should stay in buy orders with the targets of 1.3794 and 1.3834 levels until the Heiken Ashi indicator turns down. Sell orders should be considered again if the price is fixed below the moving average line with targets of 1.3672 and 1.3646 and keep them open until the Heiken Ashi turns up.

Interesting? Write a comment below.
 Overview of the GBP/USD pair. September 24. The pound received support against the background of the increased "hawkish"
Forward 
Backward 