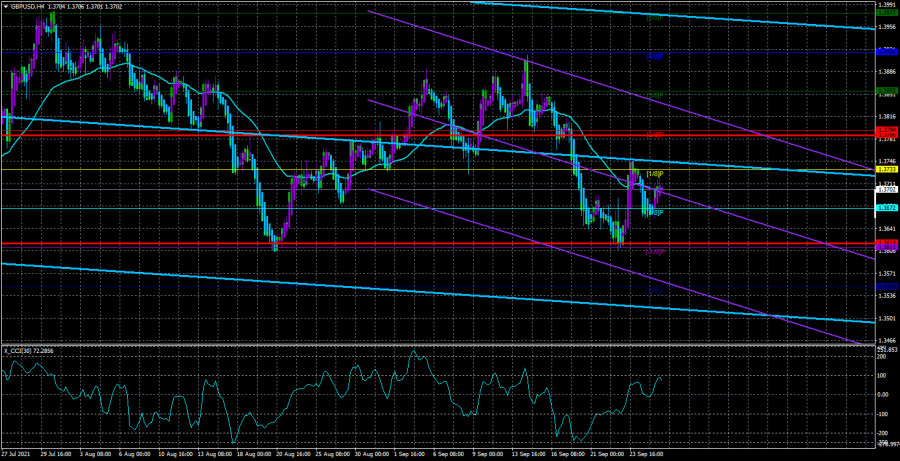 The British pound paired with the US dollar on Monday failed to continue its downward movement. More precisely, at first, the pair declined slightly, but very quickly began to grow in response, which returned it to the area of the moving average line. Thus, the downward trend persists, and both linear regression channels continue to be directed downward. However, the general situation is not much different from the euro/dollar pair. The quotes of the British pound also cannot overcome the important level of 1.3600, which has its expression on the 4-hour timeframe in the form of the Murray level "-1.8" - 1.3611. Even in the illustration above, at least two bounces from this level are visible. At the same time, the rebound is very accurate. You can even say "point". Thus, the further fall of the pair is under a big question. In global terms, the corrective movement continues, within which the dollar managed to rise by 23.6% according to Fibonacci from the entire uptrend, which occupies 2700 points. Thus, the pound has adjusted even less than the European currency over the past 6-7 months. As in the case of the euro, there are no significant reasons for the further fall of the pound at this time. More precisely, the reasons can always be "found". However, the fact that for more than six months, the markets have not been able to overcome the level of 1.3577 (23.6% by Fibonacci) suggests that they are not afraid of the disconnection of Scotland or the problems on the island of Ireland. The markets are even less worried about the possible deterioration of relations between the European Union and the UK. Thus, we can conclude that the general fundamental background now has almost no effect on the movement of the pair. For a long time, we have said that the main problem of the US currency is the QE program from the Fed, which is reflected in the stock market or the cryptocurrency market. The easiest way to understand this is by asking yourself the question: how could the stock market and the same bitcoin show such strong growth in the last year and a half of the crisis (the most crisis in recent decades)? The answer is simple: money from nowhere, which is printed by the Fed and sent to the economy. There is more money in the economy, so the demand for various investment assets is also growing. Accordingly, the exchange rate of bitcoin or Apple shares are growing. And for the US dollar, this turns into a fall due to inflationary factors. Once there is more money, the money becomes devalued since there are no more goods and services. Therefore, the US currency may continue to experience problems in the long term.

In the article on the euro/dollar, we already said that this week there will be speeches by Jerome Powell and Christine Lagarde. However, in addition to them, the chairman of the Bank of England, Andrew Bailey, was also scheduled to speak on Monday. His speech is scheduled for Wednesday, and on Tuesday there will be a speech by a member of the monetary committee, Catherine Mann. Recall that the members of the monetary committee voted for the most part against the reduction of the quantitative stimulus program at the last meeting. And Catherine Mann was one of those who voted "against". It will be all the more interesting to listen to her speech, in which she can share her vision of the problem of growing inflation in the UK and the prospects for the British economy. But two speeches by Andrew Bailey are unlikely to give the markets any fundamentally new information. Simply because the last BA meeting was held just last week, during which the chairman had the opportunity to explain the decisions taken by the committee. With the macroeconomic statistics in Britain, everything will be very sad. There is absolutely nothing to allocate during this week. Only on Thursday, the GDP indicator for the second quarter will be published. On Friday – the index of business activity in the manufacturing sector for September. Recall that in recent months, business activity has been declining both in the service sector and in the production sector in many EU countries. It is due to the fact that the "coronavirus" continues to terrorize humanity. However, Friday's report will be the final for September. There is unlikely to be a strong deviation from the value of 56.3, which was the first estimate of the PMI.

However, in addition to all the British events and Jerome Powell's speeches, several other important speeches of the Fed representatives will take place during the week. For example, Charles Evans, John Williams, and Lael Brainard were scheduled to speak on Monday. On Tuesday - Charles Evans, Michelle Bowman, and Raphael Bostic. On Wednesday, Patrick Harker. On Thursday - John Williams, Raphael Bostic, Patrick Harker, and Charles Evans. On Friday, Patrick Harker. It is unlikely that important information for the markets will be hidden in the speech of all representatives of the monetary committees and, concurrently, the heads of the US federal reserve banks. And it may come unexpectedly since traders often track the performances of only Jerome Powell, but not his colleagues Recall that at the last meeting of the Fed, it became known that already 9 members of the monetary committee out of 18 support an increase in the key rate in 2022. Thus, the "hawkish" mood is also strengthening in the ranks of the Fed. However, there have been few comments on the timing of the curtailment of the QE program recently. Therefore, the information that Harker, Bostic, or Brainard can share can potentially be very important for the dollar, which cannot continue to grow below the level of 1.1700 in any way.

What is the result? This week, traders are waiting for a huge number of important speeches, but at least 20% of them contain important information. With macroeconomic reports, it is becoming more difficult and sadder, there will be much fewer of them. The key level for the pound remains 1.3600. Until the markets can overcome it, there is no point in thinking about a further fall of the pair. And most of Monday, the price's pullback from this level just continued. Thus, this is the third rebound in the last two months. The pair will not be able to bounce off this level forever. Each subsequent rebound increases the probability of the pair's growth to the level of 1.4240, from where the drop in quotes began. As for the shorter-term prospects, to trade the upward movement, you must first wait for the pair to consolidate again above the moving average line. In this case, it will be possible to count on a move to the level of 1.3916 – the last local maximum for the pair. 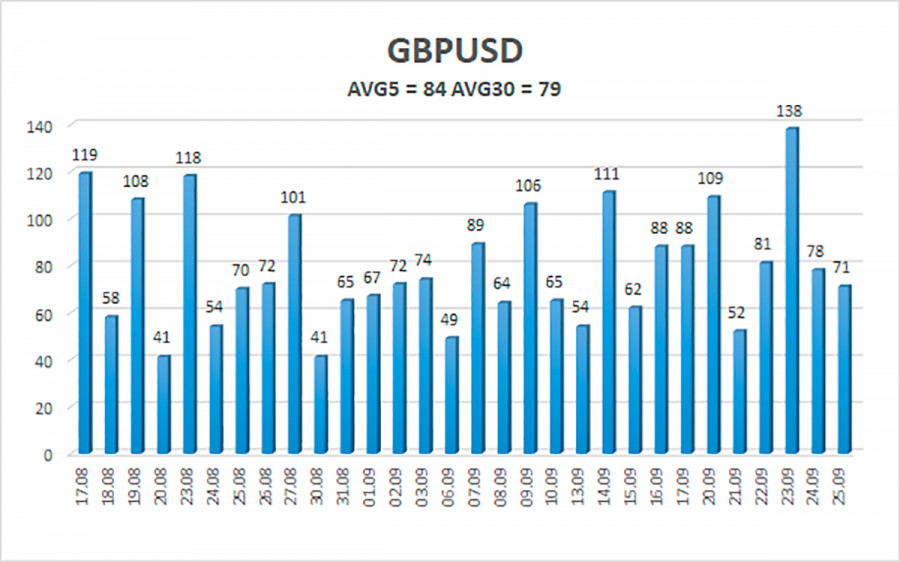 The average volatility of the GBP/USD pair is currently 84 points per day. For the pound/dollar pair, this value is "average". On Tuesday, September 28, we expect movement inside the channel, limited by the levels of 1.3618 and 1.3786. A reversal of the Heiken Ashi indicator downwards signals a possible resumption of the downward movement.

The GBP/USD pair has started a powerful upward movement in the 4-hour timeframe. Thus, at this time, we should consider the possibility of opening short positions with the targets of the levels of 1.3672 and 1.3618 in the event of a price rebound from the moving average. Buy orders should be considered again if the price is fixed above the moving average line with targets of 1.3733 and 1.3786 and keep them open until the Heiken Ashi turns down.