Overview of the GBP/USD pair. September 29. Complete chaos in the UK. The pound dropped like a stone. 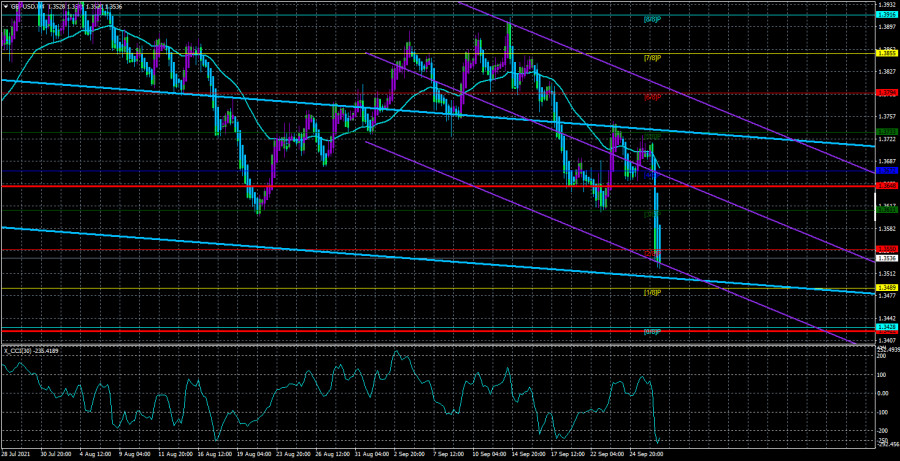 The British pound paired with the US dollar on Tuesday crashed down like a stone thrown into the water. It's been a long time since we've seen such a strong movement. During the day, the pair's quotes passed almost 200 points. And this value is high even for the British pound. There was only one event planned for yesterday's trading day in the UK that could provoke a movement. It is a speech by Catherine Mann, a member of the Bank of England. However, the fall of the pound began long before the start of the speech of a member of the monetary committee, from the very beginning of the European trading session. Thus, these two events are not connected in any way. Moreover, the European currency at the same time continued to trade with minimal volatility. The reasons for the collapse of the British currency do not lie in the fundamental background from overseas, otherwise, both currencies would have fallen (or risen) synchronously. Therefore, the reasons for such a strong fall should be sought precisely in the UK. And I didn't have to look for them for a long time.

Another crisis has begun in the UK – the fuel crisis. Due to a shortage of truck drivers, many gas station networks cannot deliver gasoline to gas stations, which is why panic has arisen throughout the country. British drivers are afraid that gasoline may run out and line up at gas stations, taking with them all available containers to refuel to the fullest. Naturally, in such conditions, gasoline ran out even faster. Therefore, concerns about fuel shortages are no longer just concerns. It is a harsh reality for the UK. It should be recalled that the problem of shortage of truck drivers appeared almost at the very beginning of this year. And, as we can see, by the current moment, it has not been resolved in any way and has also worsened. At the beginning of the year, the relevant organizations announced a shortage of approximately 100,000 truck drivers. This deficit is connected with only one event – Brexit. It was because of Brexit that many citizens of EU countries and those who came to work in it left the country. The old drivers left Britain and found a job in the European Union, where there are much fewer problems with obtaining documents for work. But new drivers do not want to go to Britain because of paperwork and bureaucracy. Also, many people note that the process of obtaining a work permit in Britain has become more complicated, the issue of obtaining medical insurance is acute. Britain, of course, is trying to solve this problem on its own, but even local drivers note that the procedure for obtaining a license and work permit is very long. Also, the procedure for training new drivers and their examinations is creaking. Thus, in the near future, the military can join in solving the problem, which will have to deliver gasoline to gas stations.

As you can see, the situation in the UK is very sad and it was because of it that the pound could collapse. It should be noted that the fuel situation is not just a problem of a fuel shortage for drivers. Due to the lack of gasoline, all social and public services may stop working. For example, an ambulance. And this threatens the country with even greater problems than it is now. Experts also note that the problem of shortage of workers is much larger than many can imagine. If before Brexit, the UK regularly complained about too large a flow of immigrants, then after Brexit it turned out that the British themselves were not eager to work in various "black" jobs. There is a shortage of not only drivers in the country but also waiters, cleaners, builders. In general, workers of all those professions love to migrate to countries with a higher standard of living and higher earnings. The coronavirus pandemic has also been superimposed on Brexit. Many migrant workers left to sit out the pandemic at home, but they are in no hurry to return. Some of them have already found work at home, some have left for those EU countries that are not inferior to the UK in terms of living standards and salaries, but at the same time do not require stacks of documents for work. For example, to Germany. It is noted that the retail, catering, and agriculture industries may face similar problems in Britain in the near future.

Thus, the British pound has just received the necessary factor to continue falling. If a couple of days ago it was hard to believe in a new strengthening of the dollar, now the British pound itself is helping the American currency, which is falling due to the lack of competent decisions on the part of the British government. 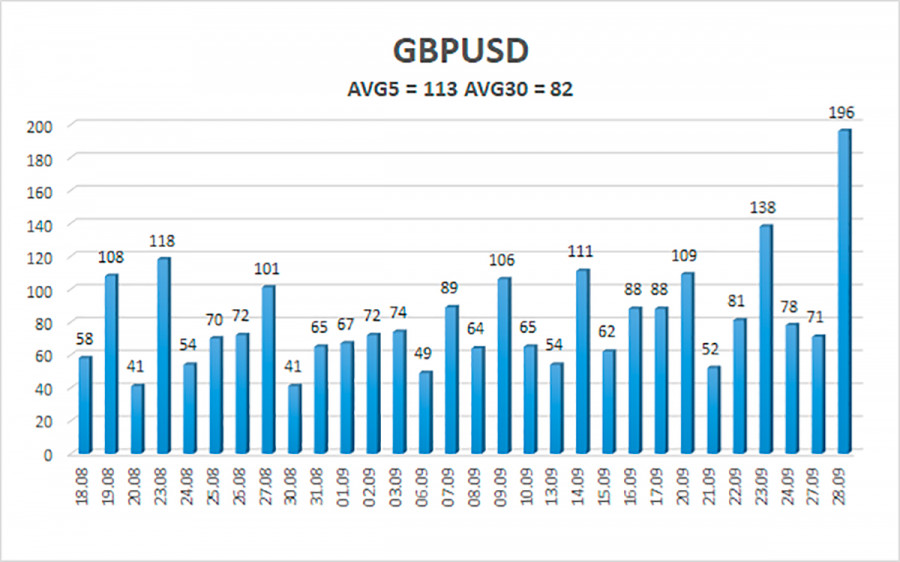 The average volatility of the GBP/USD pair is currently 113 points per day. For the pound/dollar pair, this value is "average". On Wednesday, September 29, we expect movement inside the channel, limited by the levels of 1.3422 and 1.3648. The upward reversal of the Heiken Ashi indicator signals a round of corrective movement.

The GBP/USD pair started a powerful downward movement on the 4-hour timeframe. Thus, at this time, it is necessary to remain in short positions with the targets of 1.3489 and 1.3428 levels until the Heiken Ashi indicator turns upwards. Buy orders should be considered again if the price is fixed above the moving average line with targets of 1.3733 and 1.3794 and keep them open until the Heiken Ashi turns down.

Interesting? Write a comment below.
 Overview of the GBP/USD pair. September 29. Complete chaos in the UK. The pound dropped like a stone.
Forward 
Backward 