Overview of the GBP/USD pair. September 3. In the UK, they made formal concessions to Scotland. 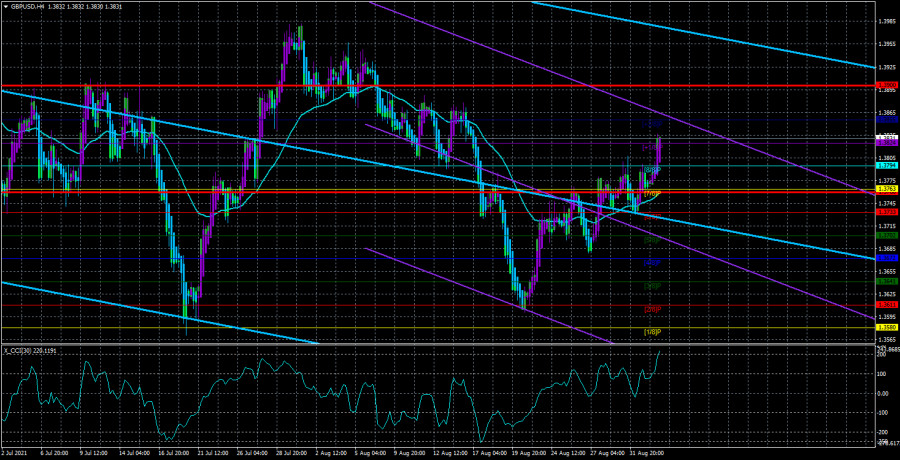 Paired with the US dollar, the British pound is also above the moving average, maintaining an upward trend. In principle, the technical picture of the 4-hour timeframe is now the same as for the euro/dollar pair. Both pairs recently completed a fall to their target levels on the second turn of the downward correction in global terms, and both pairs are now ready to form a new upward trend on the 4-hour TF and resume the global one on the 24-hour TF. Given that the volatility indicators have decreased very much in recent weeks, such a movement can be considered happiness. After all, we are not interested in the movement itself but the opportunity to earn money from it. Therefore, the movement's weakness is not in the hands of traders, and we have to deal with the question, what to do in this case? And there is absolutely nothing to do here. Nothing interesting happened in the fundamental and macroeconomic plans on Thursday, either in the UK or the US. Therefore, the low-volatility movements of the pair during the day are logical and expected. Now we can only wait for the publication of the report on Nonfarm Payrolls in the United States. And the dollar should hope that this report will not be as weak as the ADP report. However, as we have already said in previous articles, there is no correlation between these reports, so a weak ADP does not mean that Nonfarm will also be weak.

Meanwhile, the topic of the "Scottish referendum" has resurfaced in the media. Recall that Scotland ardently wants to leave the United Kingdom, believing it will be better in the European Union than Britain. Also, in the referendum in 2016, the majority of Scots voted to remain in the EU, but the UK still left the bloc, and in the case of the Scots, it turned out that their opinion was not taken into account. It explains their fierce desire to return to the EU. However, it is better to say "the fierce desire of the Scottish National Party" here. Scotland's First Minister Nicola Sturgeon has strengthened her position in the Scottish Parliament after May 6. Therefore, it is now considered that the majority of Scots support the leader of the SNP party and her initiative to hold a second independence referendum. However, many experts are not sure that in this referendum, the permission for which should be granted by London, the majority of votes will be given for the option of secession from the UK. For example, recent opinion polls among residents of Scotland have shown that at various times from 44% to 50% support separation from the Kingdom. However, 50% - "for" means that 50% - "against". And this, in turn, means that the referendum for Scottish independence may turn out to be the same as the referendum for Brexit. With a minimum advantage of one of the parties. In turn, Alister Jack, a member of the British government for Scotland, said that theoretically, a referendum could take place if at least 60% of the inhabitants of Scotland support separation from Britain. "If 60% of the country's population has expressed a desire to hold a referendum for a long period of time (which is not the same as independence from Britain), only then it should be recognized that the people have a strong and serious desire to hold a referendum," Alister Jack said. "However, there is nothing like that now," he added.

Thus, so far, all the talk about the Scottish referendum remains nothing more than talk. Recall that Nicola Sturgeon herself promised to achieve the right to hold a referendum within 1.5 years after her party's victory in the parliamentary elections. Thus, it still has time, at least until the end of 2022. By the way, no information has been received from Nicola Sturgeon herself on this issue recently. Nevertheless, Alister Jack's comment gives grounds to assume under what conditions a referendum will be possible. For the British pound, all these messages are uninteresting right now. Recall that, in general, a minimal amount of information has recently been received from the UK, not to mention important information. Therefore, the British currency is more focused on American statistics and the American fundamental background. 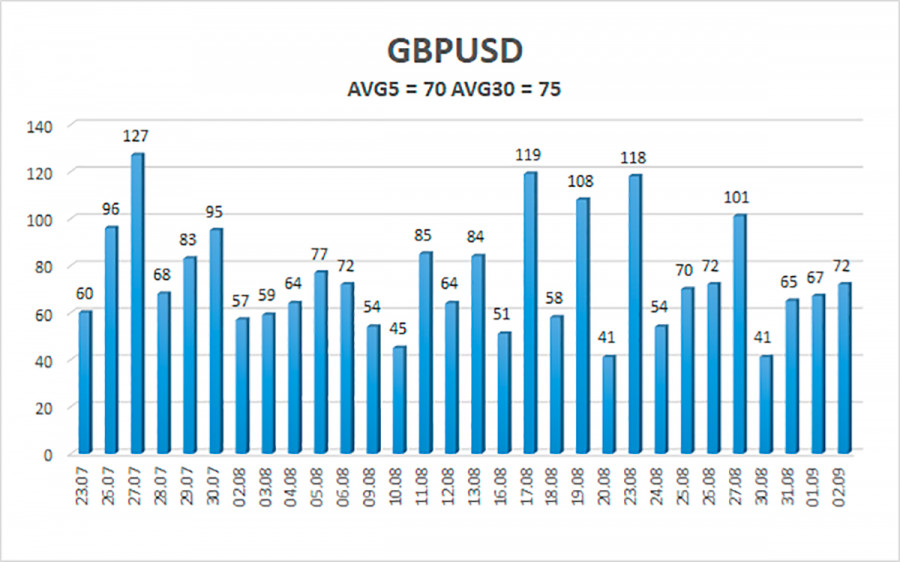 The average volatility of the GBP/USD pair is currently 70 points per day. For the pound/dollar pair, this value is "average." On Friday, September 3, we expect movement inside the channel, limited by the levels of 1.3760 and 1.3900. A reversal of the Heiken Ashi indicator downwards will signal a new round of corrective movement.

The GBP/USD pair continues to be located above the moving average line on the 4-hour timeframe. Thus, today, we should continue to trade for an increase with the targets of 1.3855 and 1.3900 until the Heiken Ashi indicator turns down. Sell orders should be considered in the case of a reverse price consolidation below the moving average line with targets of 1.3733 and 1.3702 and keep them open until the Heiken Ashi turns up.

Interesting? Write a comment below.
 Overview of the GBP/USD pair. September 3. In the UK, they made formal concessions to Scotland.
Forward 
Backward 