Overview of the GBP/USD pair. September 30. The UK continues to be in a fever. 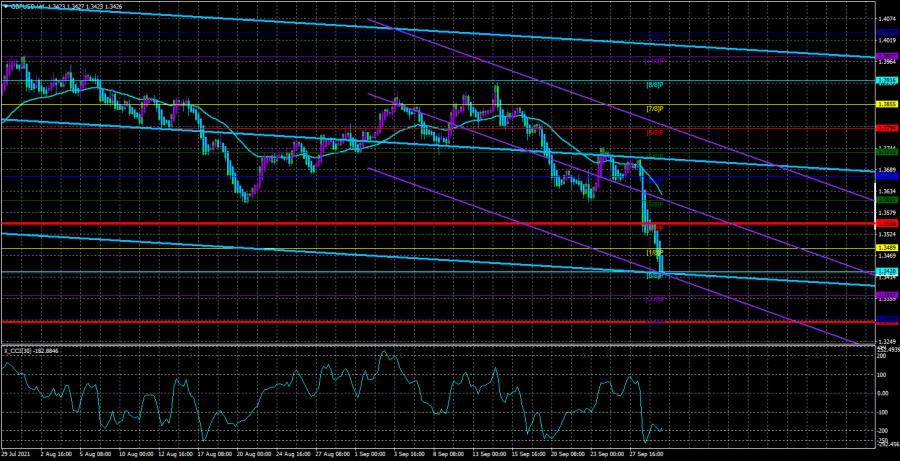 The British pound, paired with the US dollar, continued to fall on Wednesday after it fell by almost 200 points on Tuesday. Recall that some unprecedented event could only provoke yesterday's such powerful drop in quotes. Take a look at the illustration below. The last time the pair passed 200 points per day was more than 30 working days ago. Over the past 30 trading days, the maximum value of volatility was 138 points, and the pair was able to pass more than a hundred points a day in only 7 cases. Thus, 200 points is a really powerful event in the current realities. It is all the more interesting that it was not provoked by a meeting of the Bank of England or a speech by Andrew Bailey. It was provoked by the "fuel crisis" in the UK, which does not exist. Gasoline and other fuels abound in the UK. It was stated by members of the country's board and representatives of fuel retailers. The problem is the lack, or rather the outright shortage, of truck drivers who could deliver this fuel from refineries to gas stations. And this problem has been facing the UK for several years, as stated in Parliament. However, Brexit and the pandemic only made it worse, so what happened happened. In the near future, the military will solve the current problem, which will be used simply as truck drivers. Also, the British government has already tried to issue temporary visas to 5 thousand drivers from Europe. However, retailers said this is a good step, but there are not enough 100 thousand truck drivers in the country. In addition, many workers now do not want to go to the UK. First, there is a pandemic, and the UK is constantly at the top of the list in terms of the number of cases and deaths from the COVID virus. Second, the rules for obtaining jobs and visas in the country have significantly tightened after Brexit. Experts note various kinds of bureaucracy and paperwork that arise when applying for a job and obtaining visas. And there are plenty of countries that are not inferior in terms of salaries to Britain. For example, Germany or the Netherlands, where the profession's "trucker driver" is now flowing. Already, experts say that the fuel crisis may persist in the country for at least a month. The Times reported yesterday that fuel shortages at gas stations will persist until Christmas, even if people stop refueling altogether. The UK government is urging Britons not to fill their gas tanks just in case and to behave "as usual."

It should also be noted that this is not the first crisis that is associated with logistical problems. A couple of weeks ago, a "milk crisis" began in the country. All because of the same shortage of truck drivers, a shortage of dairy products has formed in many stores in the country. Representatives of dairy farms and factories said that their products disappear since no one can take it to the end consumer in stores. In addition, dairy industry representatives declare an acute shortage of warehouse workers and other specialties that do not require special education. All guest workers have left the country, but the British do not want to work in unattractive and low-paid jobs. Thus, altogether, it can be called a "logistical crisis." It is still unknown how the government will solve it if it was formed, at least at the beginning of this year, when Brexit was fully completed. It is unlikely that the British military will retrain as drivers and work for free in this profession.

From a technical point of view, the downward trend in the British currency remains. In principle, the pair has been falling for two days in a row. It is located below the moving average line, and both linear regression channels are directed downwards. Thus, formally, the fall in quotes can continue for as long as necessary since the price has overcome the level of 1.3600, which we have long considered a reference. However, this time it was the "foundation" that provoked the movement and the strong movement. At this rate, the pound may fall to the next 38.2% Fibonacci level on a 24-hour timeframe, equal to 1.3163. If in the situation with the euro currency, the dollar is growing now solely on market expectations about the curtailment of QE, then in the case of the pound, the fall is due to the fuel crisis, the logistics crisis and is multiplied by market expectations for the curtailment of the Fed's QE program. 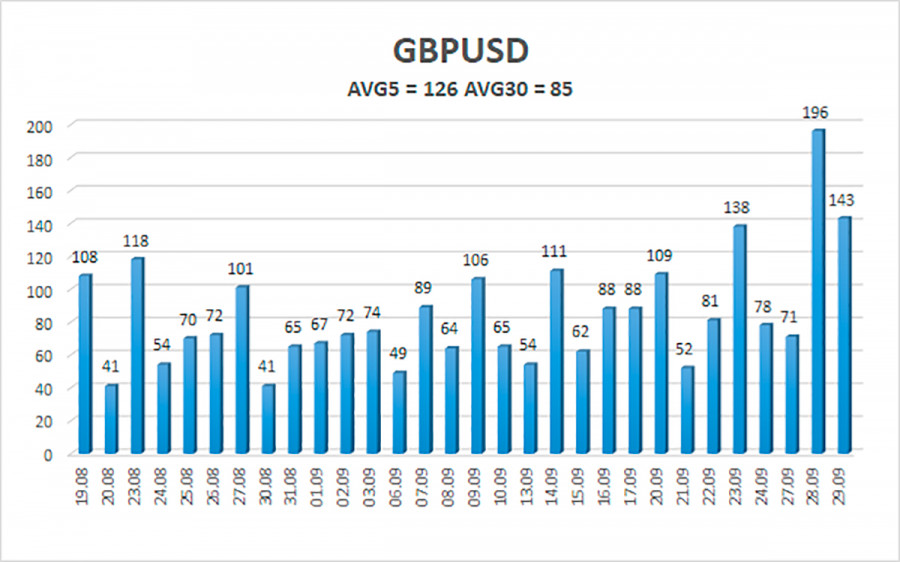 The average volatility of the GBP/USD pair is currently 126 points per day. For the pound/dollar pair, this value is "high." On Thursday, September 30, we expect movement inside the channel, limited by the levels of 1.3300 and 1.3552. The upward reversal of the Heiken Ashi indicator signals a round of corrective movement.

The GBP/USD pair continues its powerful downward movement on the 4-hour timeframe. Thus, at this time, it is necessary to remain in short positions with the targets of 1.3367 and 1.3306 levels until the Heiken Ashi indicator turns upwards. Buy orders should be considered again if the price is fixed above the moving average line with targets of 1.3672 and 1.3733 and keep them open until the Heiken Ashi turns down.

Interesting? Write a comment below.
 Overview of the GBP/USD pair. September 30. The UK continues to be in a fever.
Forward 
Backward 