Overview of the GBP/USD pair. September 7. Andrew Bailey's speech after a long pause may affect the exchange rate of the 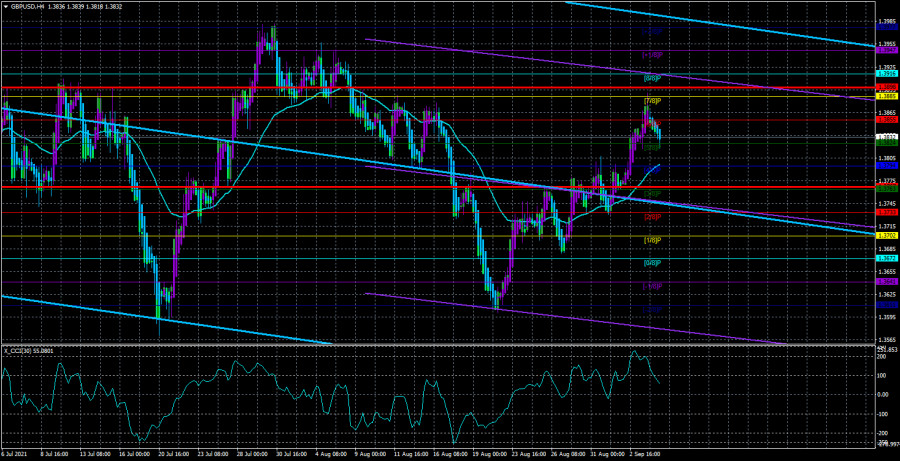 The British pound continued to adjust against the US dollar on Monday. The pair continues to be located above the moving average line, so the upward trend continues. Recall that we believe that the upward movement will continue within the framework of a new upward trend. It is supported by the absolute majority of fundamental and technical factors, local and global. Thus, after a slight correction, we expect a resumption of the growth of quotes.

Moreover, as it became clear from recent events, the probability of curtailing the quantitative stimulus program in the United States in the near future is low. And in any case, Jerome Powell did not signal to the markets that this is possible in the near future. In any case, now the markets need to wait for the Fed meeting, which is scheduled for September 22. After its end, it will be possible to talk about the plans of the American regulator. Unfortunately, the pound has fallen ill with the euro currency disease in recent weeks - namely, reduced volatility. The illustration below clearly shows that most of the trading days ended with a volatility of fewer than 80 points, and the average for 30 days is now equal to 75 points. For comparison, in May, the average volatility for 30 days was 95 points. In January – 141 points.

When we say that at this time, both major pairs are moving very weakly now, this is not a figure of speech. The pound was indeed trading twice as actively just six months ago. Thus, it is now twice as difficult to trade intraday. With the help of the "Linear Regression Channels" system, you can trade for longer periods. But the weakness of the movements has another disadvantage – frequent and small rollbacks and corrections that lead to reversals of the Heiken Ashi indicator. Moreover, if you look at the 24-hour timeframe, it becomes clear that the pair has been trading between 36 and 42 levels for more than six months. In the long term, a flat has formed, which looks like trends on smaller timeframes.

What is waiting for us in the current trading week? We have not received any important information from the UK for a long time, either of a macroeconomic or political nature. In recent weeks, the UK Parliament has been on vacation. The weak volatility may be partly related to this moment. Nevertheless, autumn has come, so it's time to get to work, and now the top officials of the UK should make speeches more often, giving the necessary information to the markets. Nothing interesting happened on Monday. Nothing interesting is planned for Tuesday. Two speeches were scheduled for these two days by the new member of the monetary committee of the Bank of England, Catherine Mann, who replaced Gertjan Vliege, who held his position for six years. However, it is unlikely that the new member of the BA ILC will immediately start distributing comments that will provoke a shake-up in the foreign exchange market. Thus, all the most interesting things for the pound/dollar pair will begin only on Wednesday, when a special Treasury committee hearing will be held, at which the head of the Bank of England, Andrew Bailey, will make a report. Other members of the ILC are also scheduled to speak on Wednesday: Silvana Tenreyro, Dave Ramsden, and Ben Broadbent. But there will be nothing interesting in the States on Wednesday. It is unlikely that the Beige Book report can be considered an interesting event – the markets never react to it. On Thursday, the situation for the US currency will practically not change since the United States will again have an almost empty calendar of macroeconomic events. Only the speech of the Fed member Mayor Daly can be noted. Even the report on applications for unemployment benefits is no longer included in the category of important publications. And finally, on Friday, everything will be quiet and calm in the US, and in the UK, GDP will be published in monthly, three-month, and annual terms, as well as a report on industrial production. Thus, Friday will be the most interesting and important day for the pound/dollar pair traders this week. 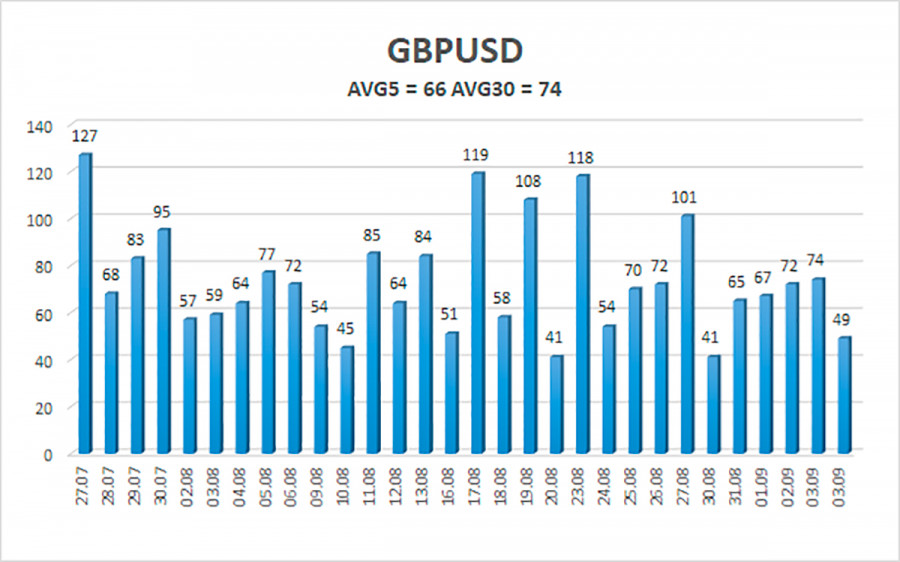 The average volatility of the GBP/USD pair is currently 66 points per day. For the pound/dollar pair, this value is "weak." On Tuesday, September 7, we expect movement inside the channel, limited by the levels of 1.3766 and 1.3898. The upward reversal of the Heiken Ashi indicator signals the resumption of the upward movement.

The GBP/USD pair continues to be located above the moving average line on the 4-hour timeframe. Thus, today, it is necessary to trade again for an increase with the targets of 1.3855 and 1.3885 after the reversal of the Heiken Ashi indicator up. Sell orders should be considered if the price is fixed below the moving average line with targets of 1.3766 and 1.3733 and keep them open until the Heiken Ashi turns up.

Interesting? Write a comment below.
 Overview of the GBP/USD pair. September 7. Andrew Bailey's speech after a long pause may affect the exchange rate of the
Forward 
Backward 